Hi Guys,
I’m working on one of my demo reel pieces here at Gnomon. I’m going for the whole halo/destiny look for it, trying to get the sort of fx, I most likely be replacing the tower with a better model produce by a friend of mine. Any critiques on the effect or on the actual presentation(camera angle, timing)would be appreciated. Thanks for the help in advance

Personally I think the refraction is a bit on the too obvious side, and I’d tone it down a little.
Additionally I’d think it would be cool to have the fog on the foreground react and move away from the tower a tad once the pulse goes off. (taking delay into account)

Also, the debris falling from the shattering rocks could use more velocity away from the tower, that pulse you got seems extremely powerful so it would propel debris quite far and fast.

Thanks, guess I should time all the fogs. Have a quite a lot fog in the midground and background as well. Now I think about it the shattering debris could be too distracting, might be better to just remove it entirely

I think the colored waves continuously emanating out from the beam should be denser coming out of the beam and thin out as they get farther. The color change from that teal-ish to blue looks good though. I agree with Luos on the fog getting pushed out a bit

This is great - It’s already got a nice feel and timing, and could already work well in a game. I think this is your best effect that I’ve seen - well done!

One pretty simple change id mention is the plane mesh at the bottom. Maybe pull the camera out a little instead of looking directly up the beam. Currently you get a lot of weird texture crunching going on from the perspective. Its very obvious that its a 2d plane scrolling textures upwards.

Also possibly add a little extra detail to the beam its self. Some more small movements instead of just sparks could be awesome!

Looking pretty sick so far though!

Awesome work Nathan,
I think that the shader on the building can be done differently in terms of timing,
-The color intensity starts from the bottom, and continues top, then waits, for the circling clouds, then discharges
I would have either, made it
a - pulsating from bot to top, on graduate intensity where the max is going to be on the same timing of the Discharge
or
b - only bot part that lights up, and intensifies, and just before the discharge, it would go up to the top of the tower for the discharge
here’s an example of what i mean

Hi Keith, could you further explain the minor notes? Is it the outer blue swirl, or just the whole pulse that needs to pop

looks cool. How about add some contrast & match the color of clouds in the sky? 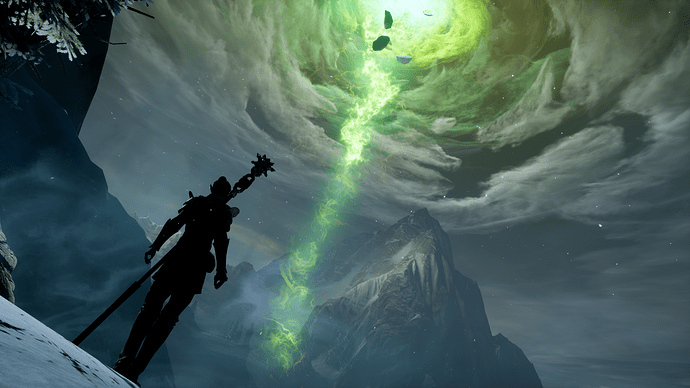 Yea, I was thinking just the elements that you’ve circle. The rest of the effect has a bigger pop, and those feel like they don’t carry the momentum through the burst as much. It’ll make it feel a bit more forceful… but again, that’s very minor adjustment