Most Recent Version Below 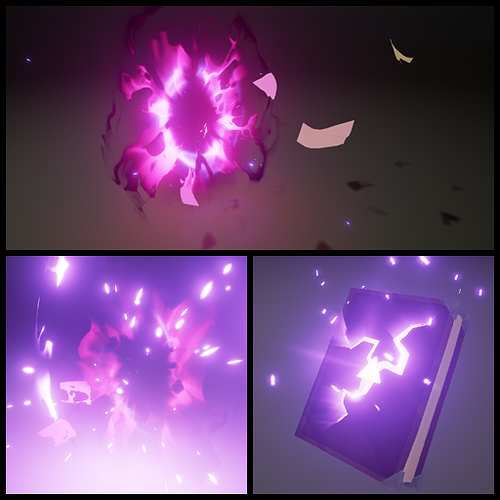 Hey everyone! As a goal I want to try and become more active in this community, so I figured the best place to start would be to participate in this month’s VFX sketch!

I decided to do the portal and have posted a WIP below. It is currently just the active state for the portal. There are a few issues, most notably a seam artifact that I will have to smooth out. I have been inspired recently by the VFX in Guardians of the Galaxy, so attempted to create an unstable energy portal in that vein.

Next up is to work on the start and stop for the effect.

I like it so far! Right now, my eye is drawn to the bright white wispy bits flying off from the portal, given they are the brightest, fastest, and most eye-catching element. Personally, I’d love to see you bring the focus back toward the core of the portal (whether by using dynamic motion, color, or value variance, for example), and let everything further out fade into secondary and even tertiary prominence.

Good suggestion and thanks for the feedback! I plan on giving the portal shader an update at some point soon to do just that! Going to try to bring some more color values in there as well, which I started doing a little with the wispy bits (which start purple and end blue).

As far as the start effect, my current thought is to have the portal emerge from a book of some sort. The book will float up in the air and start to crack with purple light and explode out with energy revealing the portal, maybe with some pages flying out of the portal as well. So essentially it is a book portal of some sort. We’ll see how much of this I can get done in the time that I have!

Any other suggestions or critique welcome!

Spent some time updating the portal shader this evening, playing around with different looks. I attached the video of the most current version below. I still haven’t gotten to the start/stop yet, just trying to get the look of the actual portal down first. I still have to change up the wispy bits so that they look more like they are coming out of the portal or flaking off of it rather than shooting around it.

As always, any feedback is welcome!

I hope to get some time to work on the start animation for it in the next few days.

wow its very mesmerizing. As you said about the wispy bits, they feel like should have a more clear beginning.

But other than that, really looking forward how you will tackle the opening, the portal overall feels more than solid! great job!

Thanks! I hope to post some more WIP tonight. Everytime I work on it I end up changing the look of the portal, haha.

I had sometime over the weekend to get the start animation going. It is starting to come together more but still needs a bunch of little details, most notably a proper burst effect for the portal appearing instead of just scaling it up. If I get a little bit more progress tonight I’ll post some updates!

Worked a bit more this evening on the portal. I have a list of elements I still want to add/polish on it, but here is the current update for it! The video got a little washed out when I uploaded it unfortunately.

Here is the current list of things I want to do with it.

If anyone else has any ideas or feedback I would love to hear them!

Very cool animation all around. and those dissolving shapes are super delicious!

I think the effect looks better when you don’t mess around with the camera. The second take was the best one. The third one is also good, but the second just didn’t make the portal feel as flat.

I looked through your list och changes you are looking into. It looks nice. But the anticipation on the book should be higher prioritized in my opinon.

I feel that the effects around the chargeup could and should be more powerful, make the effects faster, more intense, beams of light that crackle on from magical-purple-cracks, the book starts swirl and shake more because its about to explode then a big flash big and the portal is active.

@ChrisNordgren Thanks for the suggestions! I agree, there definitely should be some more anticipation to the portal explosion. The anticipation and main portal explosion should definitely be the priority! I got too excited thinking about other little details, haha. I also want to try to get some more dimension into the portal mesh, maybe by having it curve back on the edges and then adding the wispy bits coming off in all directions, which should hopefully help not make it feel so flat in certain views. Also agree with you about the camera! I was trying to show a closeup of the book crack itself, but the cut is a little jarring. Great feedback!

Another update! I did some general polish on the intro animation and VFX and added in a few additional elements as well as updated the pages animation to have better timing. There is still some more stuff I want to add and polish (exploded book pieces, energy wispy stuff, and an outro - I keep putting that off and don’t currently have any good ideas for it). I posted some screen grabs below as well.

As always, any feedback is greatly appreciated!

I like how you added shafts of light coming out of the book, and the floor dust movement gives the portal a sense of power

This is really cool. Although I’d recommend having your paper erode at the edge with the same color purple. It took me 3 watches to realized that the paper was eating away, and that it wasn’t a graphical error. If you have the time, maybe have the pages emit little purple bits that get sucked into the portal? Any kind of small detail like that to help sell that the pages are getting either burned away, or sucked into the portal. I really am liking the style of your core, and the book is a great narrative touch! Awesome work so far!

Thanks! I appreciate the comments and feedback! The next iteration should have the purple energy eating away the paper. @Travis Great thought about little bits that fly off of the pages, if I have the time I’ll try and add that in, although it may be tricky with the current method I am using for the pages. I’m going to try and finish up some of the main parts tonight (mainly an exit animation). Again, thanks for the feedback and hopefully I will have an update to post later tonight or tomorrow.

Another update. I added in the glowing energy for the alpha erode so the pages look like they are burning up and also added an exit animation. There are some other things I want to do with it if I have time but the list is getting much smaller. I think next I am going to explore having a chunk of book with a page or two attached fly out of the initial explosion and might polish the end animation a bit more. Overall it is getting close to finished though!

Wow … just wow … the details you have are awesome

Very cool man! I really like the super fluid mist from the base of the portal. I’d love to get a glimpse at how you went about that

Awesome! Yeah that edge glow helps draw my eye and reads more as the paper burning up or disintegrating into the portal. Looks good overall at all the angles too

@NateLane the mist was created with two particle emitters using a looping flipbook made from a fluid sim created in maya. For the particle systems there is one that is aligned flat with the ground to provide a misty base and then the other just flowing forward from the portal with depth fade to fade into the ground as it gets close. Nothing too crazy. I found the more particles/little things flying around that I added made the effect lose a little bit of focus, so I tried to keep the mist just sparse enough and not too insanely detailed. Once the effect is finished I might post a quick little breakdown in the final video if I have time!

Thanks again for the kind words and suggestions!