I have started a few days ago some tests on this new version of PopcornFX and it’s amazing! I use the v1 since 6 years and i was a little bit afraid with this new version, but i understand that this new version is more open. I write all my complex fx in scripts directly, and this version permit to do the same but with nodals, and it’s amazing for neo-users! And more, if you are coding like me you can share your fx with inexperienced user to open some datas for easy tweaking. The relationship between Artist and Tech-Art is more harmonious, for example, you can clearly recreates a simple master fx with all features of shuriken for the users of unity, and of course, to add a many features that doesn’t exist

For PopcornFX v1 users there are some new words to know but it’s very similar, the concept of parent passes throught “payload”, a great feature to share values between layers. Some others words are to know but useless if you are not a very advanced user. In this topic i’ll show you my tests, templates, features, and if you have any questions tell me

I created a master template, is like a simple effect at the begining, but you can consider it like a “lab” where you share all your custom nodes between your effects.

Here you can see my first templates, a standard spawner (you can activate some entry on it like color, velocity, etc…but all are tweakable in the attributes panel directly), a basic evolver (including physic and a turbulence sampling) and some “Lod” systems.
-Distance: Diminish the particles count by distance.
-OutsideTheScreen: Delete particles that spawn outside the screen (for specific system where you have a system that spawn particles around you).
-Column: Shrink the size and fade the particles when you watch by the top, 1/2 particles, 1/3, 1/4 or the value that you want.
-Anti-Flickering: Permit to avoid problems of flickering for very small or far particles.

If you are interested, tell me if you want that i show inside of a template.

Ok i try to remake my old Volcano In Pkfx V2 is very cool!

6 years in back, in V1 >>> https://www.youtube.com/watch?v=TPKOYXhvvlk 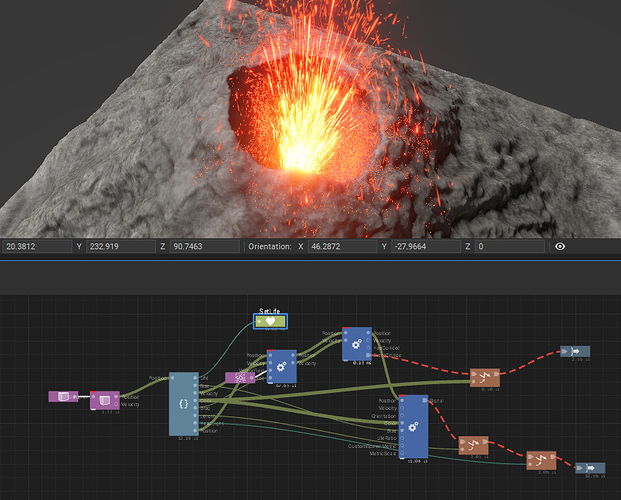 For the moment the look is very raw and a lot of layers not appears.

Some tests of Collisions & trails, the Payload is your friend in the chaining of layers!

Little update, always with the default texture for the moment. 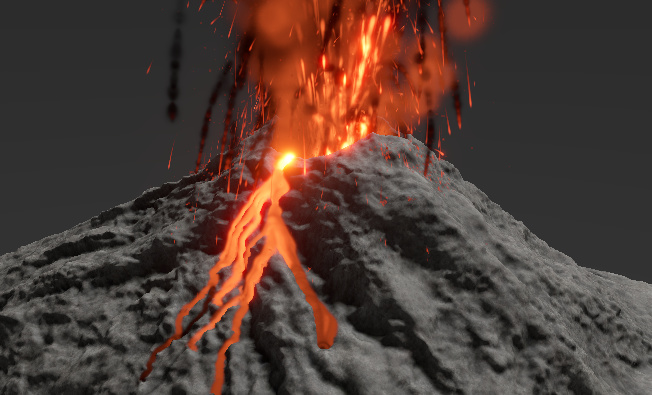 Test of the projection evolver for the rivers of lava.

My current state for the moment.

A new test about the possibilites of the v2, i have tried to remake the standard torchfire of the samples, in 1 layer! The old effect was made with 3 layers, here i have used just one script with all i needs to do the 3 states of the torchfire. It’s amazing to do some operations at the evolve or at the spawn in the same script! 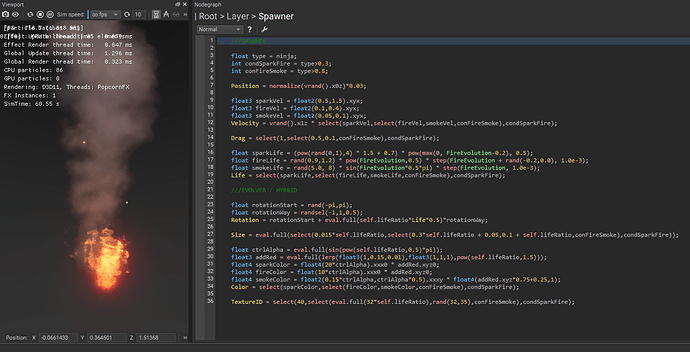 And the very simple node graph.

That volcano animation looks real cool, have you tried bringing it into unreal ?

you could most likely have cleaner graphs with less wires all over the place if you maybe split up those big spawn scripts? would be more readable.

Yes i’m going to put it in unreal, this can be great! 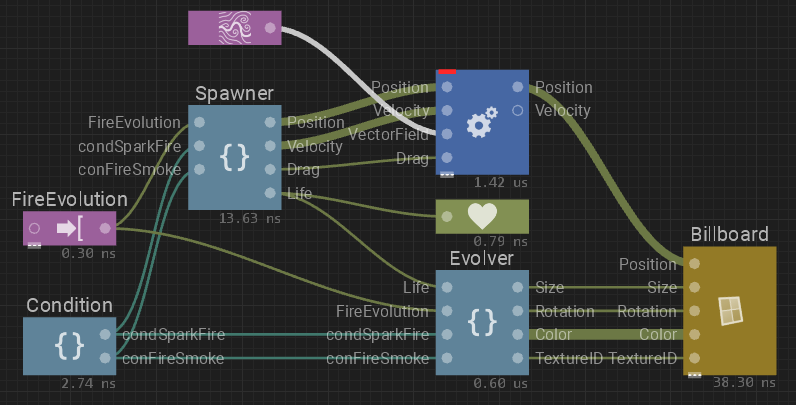 A little test with some procedural turbulence made with scripts. (and with 4 millions of GPU particles