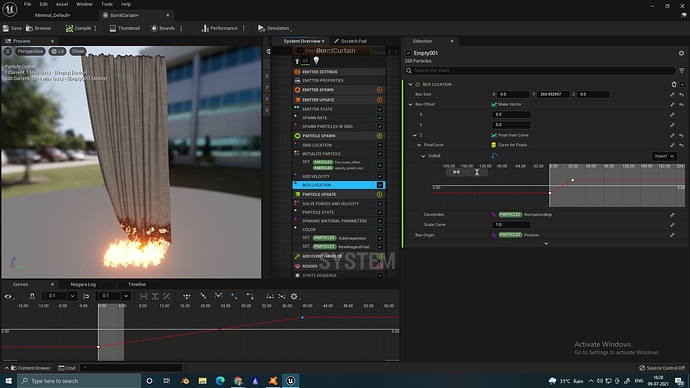 I added Box Location and then to animate the Box Offset for Z-Axis, I added a float from curve to the z-axis and added keyframes to the curve but it is not Animating. How to tackle this?

Because you need to put the box location in UPDATE, I think. (Spawn is once)
How did you make the curtain? If Houdini you could export particles as hbjson that follow the leading edge of the burn, and use them in Niagara to emit the fire particles.

How can I put the location in update?

(The model was modeled in Blender and textured in unreal)

Hum… I think there is also an issue with your curve. The curve index is Particle.NormalizedAge parameter value. This value is between 0 and 1 (0 being the particle being born, and 1 the moment it is killed) if I’m correct. Then your curve using a high value like 40 seems really out of range. Your curve should be between 0 and 1 on the x-axis to be from particle’s birth to particle’s end.

Also, if you moove this to the emitter update, be sure to replace the curve index with the Emitter.Age value and try to fit with it inside your curve (if your emitter loop is 10 seconds, then your curve should be from 0 to 10 on the x-axis)

Then use a Particle Reader to emit “Fire” particles from these. I am sure there is a more optimized way though…

Thanks, I wass trying system.LoopedAge but didn’t try Emitter.Looped Age

Sure it helped Thanks