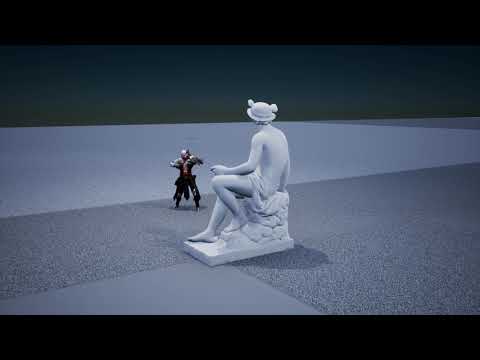 Hey, I wanna participate in this challenge. So basically my idea is some kind of an anciend Roman statue get destroyed by some character with an energy beam or fireball. I’ll do simulation in houdini, take an animated character or animate in by myself and do all other vfx in ue4. Hope I’ll do it in time, cus I’ve got other work to do.

How it looks in unreal. I took a free statue model from Turbosquid, character and animation from Mixamo.

Had a bit time to sketch this beam/energy thing idk. Aslo thought about change destruction sim a little.

So, I had not much time because of GameJam, but I improved destruction a little. Maybe in future I’ll finish this FX.

And yes, I wanna read some critique. I know it’s looking raw, but I wanna get some feedback (what I did wrong and what I need to add), thanks.

Wow, the final update is a great improvement. The Melting and Collapse are looking really cool!
Love those melty bits and how the head is bouncing to the ground.

Thanks, I’ll improve this by adding some displacement to broken pieces and some trails before beam.