This is my first time participating in a sketch. There’s so many incredible and inspiring effects I’ve seen made on sketches I really wanted to join as well, but never really had the time. So here I am with my first post ever, and honestly a bit nervous seeing the incredible vfx you guys make.

The idea is this:
An orb spell that generates strong winds in an area. Still not entirely sure about the spell gameplay purpose. Wanted to make it just a pure damage spell, but might go the druid, healing winds kind of vibe, and adjust the colors and shapes to make it read more positive and helpful.
I want to make the winds with swirling meshes and textures, perhaps some particle systems to add interest. I’ll try to focus on readability, making sure the limits of the area are well defined, but at the same time make sure that there are enough secondary elements that it doesn’t feel boring and non-impactful. 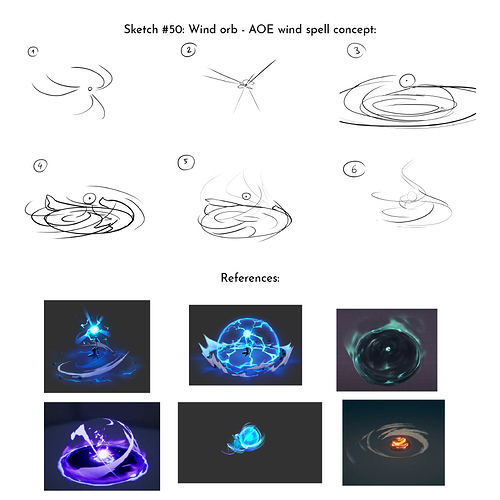 It’s honestly a bit embarrassing sharing the concept but okay. I’m thinking swirling mana collects into a small sphere, then explodes into the actual AOE spell. I want the spell to be smooth, so I don’t want to overdo it with the anticipation. Might even skip step two entirely.
I can visualize the effect and the timing in my head and it could be cool. Just hoping I can actually make this.

Why are you embarrassed? This is professional and you’re thinking through your creative process. Riot artists share their work all the time. This is cool. Are you planning on doing this in UE4/5 or Unity?

If you don’t mind, post as you go through the steps of the process, how you achieved something, videos watched and tutorials/articles you read and etc. Others (me) will learn a lot from it hehehehe.
By the way, I’m also working on an AoE spell too (I love it!). I also used some of those references

What do you mean by it? You mean you don’t want it to explode?

Thank you!
Just a bit embarrassed because I’ve never really shared my concepts or non-final parts of the process with anyone.
I’m making this in Unity.

Thanks!
Hah, alright, I’ll try to show as much of the process as possible.
Oh that’s cool, I’m also looking forward to seeing your work.
By skipping step two, I was mostly just thinking of cutting down a bit of the anticipation. I still want there to be an explosion, but I think it doesn’t have to be quite as impactful if I go with a healing/support kind of skill.

First progress update!
I’ve thunk it over a bit, and come to some decisions regarding my original idea.

Created the first part of the effect (first two steps from the concept, a bit modified).

The idea is that the orb hits the ground and explodes, which initiates the aoe winds. I like the timing so far, but the textures are still a work in progress.

I’ve also been playing around with the winds at the edge of the aoe.

Definitely need to work on those textures, but I feel like it’s a good direction.

Next up I want to add some element to the ground and create the transition from the explosion to the aoe. Also need to figure out how to make little wind swooshes during the aoe. (maybe even more soulercoaster type meshes?)

Okay, I’ll throw my artistic “hat” into the ring and do the VFX dance lol: 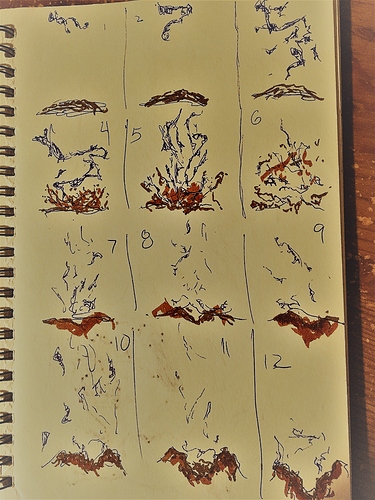 I also have another one since this one is really nice but now have a few others and this also for some reason looks like it was shot in cowboys era times lol. #SeppiaToned. Next step? Try making it in Unity? Any help?

If you’re working on the sketch challenge, I’d recommend creating a new topic in the event.
The concept looks interesting. The next step could perhaps be to create the lightning flipbook animation since that seems to be the primary element, then you can make the rest in Unity.

Progress update time! Been a while as I’ve had to move since the previous update.

I worked on the orb impact. Added a circular mesh with a scrolling texture. Also changed the timing a bit and modified the colors (more saturated and green so it feels more like healing).

I’m really happy with how this turned out. I like the timing and dissipation. Might still add some glow or lightrays to the orb during anticipation.

I’ve been sloooowly progressing on the aoe wind part of the effect. This is how it looks so far:

I think I’m making good progress at the moment. I feel like the current effect is way too noisy and hard to read so I need to work on that. Also, I need to do something about the transition from the explosion to the aoe.

Current vfx: (need to figure out how to make higher quality gifs

Really happy with how it’s looking, still a couple of things to fix but it’s getting there.

I really want to finish this vfx soon, so I’m setting myself a personal deadline to finish by tuesday - 22.3. (I got a job as a vfx artist and that’s my first day

I’d like to finish this effect up before I start)

really want to finish this vfx soon, so I’m setting myself a personal deadline to finish by tuesday - 22.3. (I got a job as a vfx artist and that’s my first day

I’d like to finish this effect up before I start)

Awww Man, that’s awesome!!! I Hope I can land a job soon too!

I really love the things going upwards in a spiral motion and the ground texture.

Did you think of making things more shiny/intense by raising the HDR in some areas? So it’s more readable

Thanks!
That’s a good suggestion to make it pop a bit more, I’ll do that, but I also don’t want to overdo it (too often I just make my vfx glow far too much with bloom).

Okay. I’m done.
Added some glow and light rays to the orb during anticipation, I think it felt empty before.
Worked on textures, changed the collecting ones, the ground, and outer winds.
Fixed the colors a bit and added a tiny bit more bloom.

Also just now realized there exists a package in Unity for recording this with constant frames instead of recording the screen on my old laptop as I’ve been doing so far.
So here’s the final vfx:

Here’s a version with characters:

looks great; and I know you’re all set.

Thanks so much for the tips, very appreciated!
I did have some issues hiding the seam on the floor ring, but in the end, I thought it looked good enough.
Is there a specific reason to set vertex color for feathering instead of adding a gradient to the texture?
I’ll make sure to make use of these in vfx from here on out, thank you

Is there a specific reason to set vertex color for feathering instead of adding a gradient to the texture?

incase of scrolling textures, wanting to scroll/mult them you get a ‘free’ ramp with geo feathering, i.e. wont need another texture lookup and memory. it’s not a huge savings but it is something in terms of optimizations to be mindful of.

a ramp might be smarter too, depends what hides facets best, sometimes if the geo is very limited a ramp will be best

feathering is typically the least overdraw and only a slight adjustment; as light on resources as possible - but for a sphere though that wouldn’t work.

and the main reason for geo feathering rather than a quad is going to be clipping / sorting issues when applicable.