Just creating a place where to put all my stuff together and see my progression as I work making realtime VFX.

A few days ago, I finish a little scene that I would like to use in my Portfolio. Before starting to work in my last job I planned to create my bathroom (just modelling), but because I changed to VFX and Technical stuff, I was motivated to finish this scene and add it some effects. I recorded a small sample and I would like you guys take a look and give me some feedback.

I hope you like it. Tell me what you think! 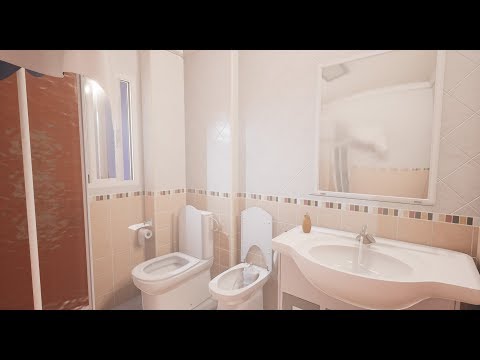 Those water effects look great! Realistic water is especially hard to do, good job. I especially love the shader you have on the water streams. The way it fades from whitewater into refraction is perfect.

There are a few bits above the drain on the sink that looks a little weird. I think they are supposed to be water droplets. It looks a bit too uniform, they form rows of droplets instead of a random pattern.

The flow direction on the smaller sink looks a bit off. It wouldn’t form a directional vortex like that unless the water was coming from only one side. It should flow around both sides uniformly.

The vortex flow on the toilet looks pretty good but i feel it should have a bit more chaotic noise in it. The frequency and pattern of refraction noise on the smaller sink (near the drain) would be perfect. Perhaps a little bit of frothing and bubbles at the bottom of the toilet.

The water spraying on the shower wall has no refraction to distort the tiles behind it. It could also use a bit more subtle high frequency refraction noise. Some beading water droplets flowing down would help with this. Water also tends to form these spiky leading edges as it flows down a vertical surface.

Other than that it looks really good! Keep it up!

Thank you very much, cEssex. I will take a look all the things you commented this weekend and see what I can do.

I am glad you like the effect in general!

I tried to get better some of the Shaders. I link a video and a picture with the new changes.

Things I tried to get better: 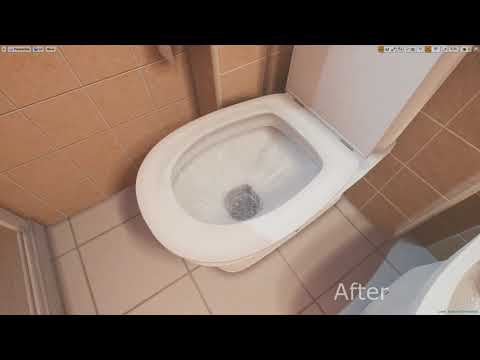 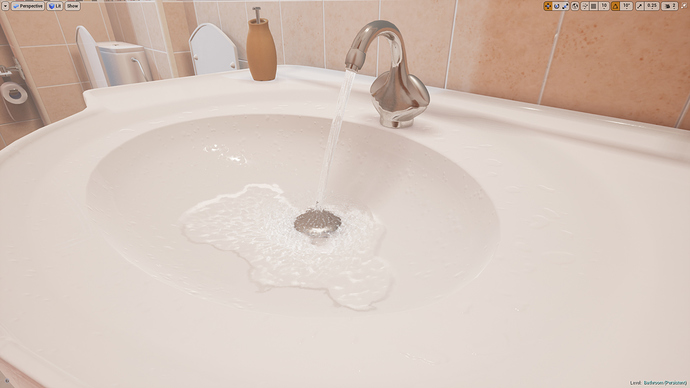 Amazing :o Great work ^^
What’s about performance? How did u did that smooth effect in the toilet? Thanks <3

Performance is good in general I think. I mean, it is a small scene, static lighting, water animations running in the Shaders (125/175 instructions in Base Pass). I think it is ok.

Memory could be better, though. I was toying with differente textures to try different combinations and now I just have to delete what I don’t need. Recently, I also learnt a couple of ways to reduce lightmap resolution without sacrificing quality. I would need to repeat the process for every mesh in the scene, but I would like to spend some time creating a tool to automate the process.

About the “smooth effect” in the toilet, I don’t know what part are you exactly talking about. For the water flowing down and the bottom I just toyed with panned textures and a little of warp.

Thank you very much for your words!

I thought I could show you something I learned some weeks ago by reading math books, so maybe someone can benefit from it. I am learning so much by reading this forum and I would like to share the few things I know. I hope this can be useful for someone.

What do we want?

We want the particles to move when they are close enough from a specific object. The movement should look like the particles are being pushed and creating a path to the object itself. This is a video reference: 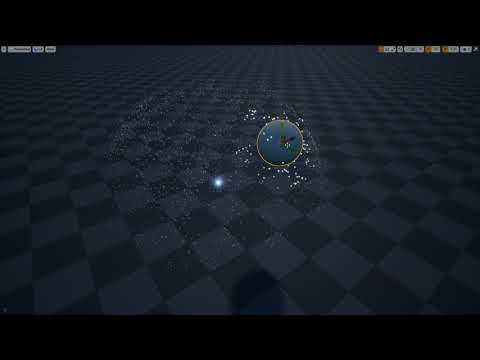 How do I move particles when the object is close enough?

We need to do two things:

That behaviour can be created in the Shader itself. I will show you the graph, but I would like to explain part of it. 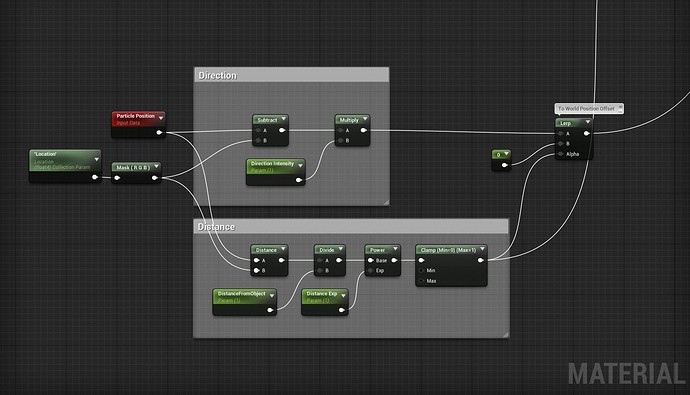 Note: (I didn’t find a way to move the particles inside Cascade in this way, but maybe it really exists and I din’t find it)

You can use the “Distance” node to calculate the distance between two points. Besides that, I added two more variables.

The reason I am using a Clamp node is because I don’t want exaggerated values in the Lerp Alpha and I don’t want to move the particles except if they are close enough from the object. 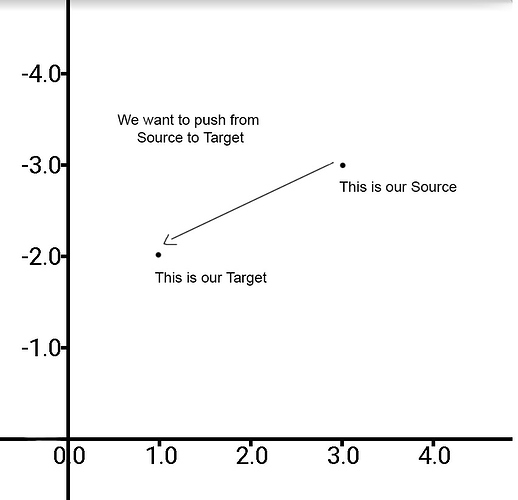 Note: This graph is in 2D, but same thing works for 3D.

We just need to do one more thing before trying this in the scene. We need to update the position of the object in real-time, so we will create a Blueprint Actor. Thanks to this, the particles will react as if they are creating a path for the object.

In this case, I created a variable (type = Static Mesh Actor) to get the location of the Sphere, but you can get the location from another object or Blueprint if you wish. You just need to change the type and select the specific object you want to use.

One idea to do the animation more interesting could be creating a timeline and a Timer in the Blueprint. For each time, the Timeline will start and create and impulse to displace the particles. You just need to update the Direction Intensity parameter we have in the graph.

I hope you like it and can be useful for someone. If you find this confusing let me know about it.

following the advices from Getting Started in Real Time VFX? Start Here! and looking to improve my Portfolio, I started creating a barrel with fire. Let me know what you think:

Looking good so far! Small bit of feedback would be to tone down the number of embers you have going, and to try and stagger their spawn rate. You can do this by making your emitter duration, spawn rate, and spawn rate scale all uniform, and then mess around with the numbers a bit. Also your distortion is pretty visible at the very top of the effect where your smoke fades out, but is hard to notice closer to the barrel. If you’re able, try and get the inverse of that situation, and have more visible distortion around the fire, and make it fade out quicker than the smoke. Colors and lighting all look great!

Thank you very much Travis!

I will work a little more in the effect to get a more unpredictable spawn for the embers and fix the distortion. Thank you for the feedback, I am glad you like it!

Another piece of work. This is about water. At the moment I keep working in the Shaders for the water and foam because I am not really happy with the current results, but I wanted to show what I have now and ask for a little of feedback to improve it. 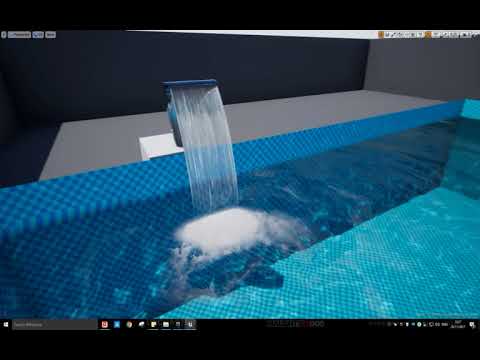 Any ideas? After a rest and watching it again with fresh eyes, I think I could keep working a little more in the Waterjet and try to get a more natural look of the water falling. I also could improve the opacity of the water in the pool when the camera change the angle. I am working with this reference as a main: 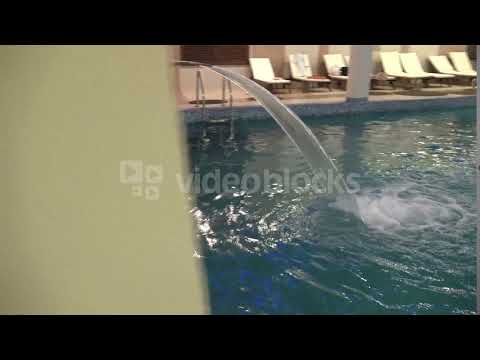 Let me know what you think about it!

PD: About the Burn barrel, I reduced the number of embers and fixed the distortion appearing above the smoke. It should be good now: 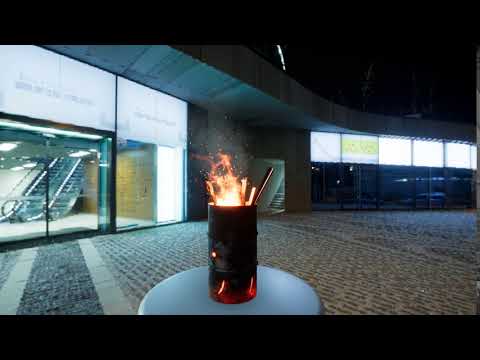 How did you do the water in the bathroom scene? It looks really good

What I am doing with the water is distorting the coordinates with a texture. I know a couple of resources from Luos and Thomas Harle where they are explaining how it works.

I hope you find it usefull too!

I see, I was thinking of the water in the sink, it looks like a deforming mesh but I’m not 100% sure