Anyone any advice on how to make a laser impact decal that starts hot and cools down over time? Basically I want it to start off red the fade to grey.
I set up the 2 colours with a lerp node with time and sine as the alpha but I don’t know how to stop it from looping back round to red.

You can just put a particle color node in your emission slot of your material. Then when you make your particle you can control the color and via cascade.
If you want to controle the alpha aswell you need to connect the alpha to you opacity aswell.

There’s a node you can add in your decal called “Decal Lifetime Opacity.” You can plug that into your alpha of the lerp. If you’re spawning your decals with a blueprint, you can set the decals lifetime and fade duration, which will drive that node in your material.

Here’s my setup for a bullet decal. The Decal opacity node controls the opacity, normal and the glow. I use a power node to make the glow fade faster than the opacity 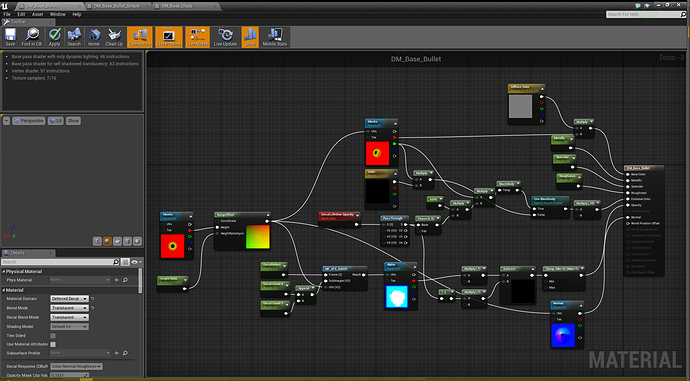 Thank you! I never knew that node even existed

I’m trying to do something similar to this. I’m trying to create a ‘scorch’ decal that lives forever, but is ‘hot’ for a few seconds at the beginning. I’m using blueprint to spawn the decal, then using ‘set fade out’ to set the duration. However the whole decal is fading out, even if I don’t even have a “Decal Lifetime Opacity” node in the decal material ?

I don’t have any experience with decals or blueprint, but when using a particle system, whenever I want to do an effect with a start that changes and then something that lasts forever, I simply make a particle for the start of the effect with a set lifetime and then another one that will live forever with a delay equal to the lifetime of the first one so that they fit perfectly.

You’d probably be better off making a float parameter in your material that controls the emissive brightness and controlling it with a blueprint and avoid using the the decal lifetime opacity. This way you can keep the decal for as long as you’d like and choose the duration for emissive parts.