Hello everyone,
After two years looking at your wonderful work I finally jump into it.
So my name is Christine Fioroni, a belgian vfx artist living in Québec city. I decided to become a vfx artist two years ago. Because I love shiny stuff, particles and sparkles.

I’m gonna post some vfx I’m currently woking on. I want feedback, critics etc to improve myself and begin a senpai like a lot of people here hahaha.

So my latest vfx I work on is a heal vfx. Yeah I could totaly join the challenge but I don’t have the balls.
What do you think?

Nice work !
but the animation is not right
i have a video how can i give to you?

Thanks ! I’m very curious about the animation

can’t you send it here? If not PM me, I’l love to see and improve myself

Here’s the update of my heal effect.

I changed the character and hide the background, then modify some timing in the shader animation, and made some other modification.

And this one is a bit different, I like both version so I keep both of them

And if you want to see both in the same video

As always don’t hesistate to give me feedback

So what do you think of the new effects?

Strong start to the heal!

Just a few notes on the effect. Of course you don’t have to listen to any of these, most are just opinion. It’s your piece so at the end of the day, it is ultimately your call. Here we go!

Keep it up! Looking forward to the next pass!

Hi, I like transition between green and red. But I don’t like color combination at this moment 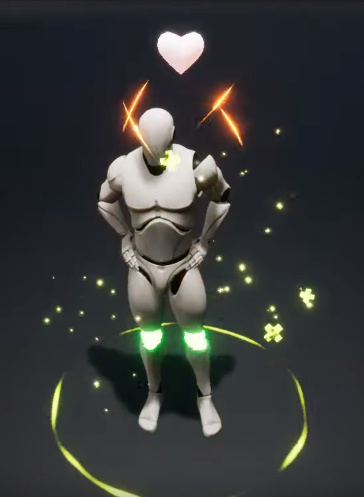 Ho waw thanks for your comment, I didn’t see your message before but I changed a lot of what you said. But i don’t change the intensity of the colors, it’s really difficult to do, do you have advice on this?
What do you say about the new one?

Thanks ! Yeah I changed the color because it was too much, what do you think of the new effect?

Now all is fine with colors. Nevertheless, you can make a color transition from this moment: 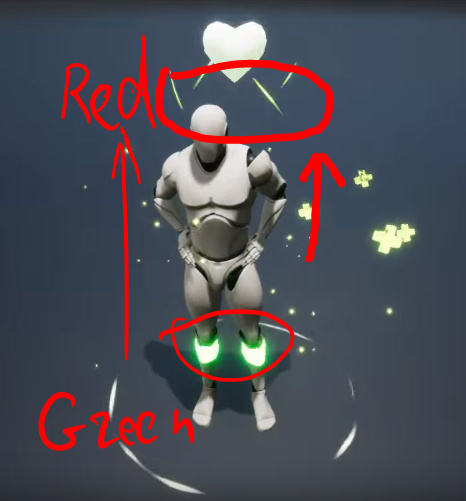 I don’t have any red color, if a make a transition from green to red it will be off no? 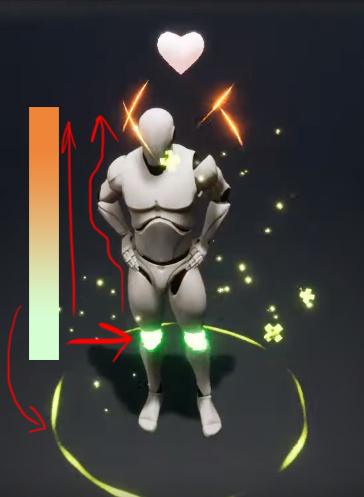 , but everything is in yellow and green so add some orange won’t make it weird?

I am so sorry… Sometimes I have difficulties to understand people. You are talking about the color transition for the new update wich is yellow and green or the old one who were with red? Because I tought you were talking about the new one. Sorry again >.<’

I talk about this one

it’s the old one. Sorry for the confusion, when I will melt those colors in another vfx I will remind me our conversation, thanks a lot for your advices

Definitely going in the right direction!

One quick additional note, I would try on positive effects to avoid having downward motion. Most of the time, heals and buffs have upward motion to them to feel positive and like energy is being gained, etc. So on the small burst from the heart, I wouldn’t have any of the particles coming down. Right now they also feel a bit like a firework which I would try and avoid.

Maybe try this, have the particles spawn outward with some velocity and have an acceleration upwards. Also have the particles rotating around a bit on an Orbit, and then slow the Orbit down over time so it has a nice motion to it. That might look cool. It also might not. Who knows!

Thanks ! I’ll try it asap

Looking forward to seeing the next pass!

Also to answer your intensity question, what are your emissive and color values set to? Also what do your textures look like?

My intensity are from 5 to 100 depends on the effect. About my textures, I’ll show you when I’ll open the project, it’s some circle, ring and dots. I used to make really shiny stuff, so shiny we are almost blind so I’m trying to be more reasonable but it’s difficult.