Hi great vfx artists!
I am not sure I can ask about this here or not.
If I could I would like to ask.

I’m making reel for improve myself and almost complete.
I wanted make attack effect move on the ground, but I don’t feel good with this effect.

I don’t know why though, I need your ideas or opinion for improve it!!

If I shouldn’t make this topic I will delete it, just let me know please!!

Moved it over to “WIP & Critique” section!

Looking like a really nice effect! I like the feel of it thus far. It has some nice burst to it; Seems like it would be a fun ability to use in a game. I like the stones popping up, it helps integrate the effect into the world well.

Thank you~
Ill improve it!

Very nice. I wish the finished state lasted longer. We just get to see the nice scar in the ground and rock debris and then it disappears.

Thank you so much for your feedback.
Yeah I would like to make scar in the ground and debris! Its textures problem, Don’t you think? Maybe I will develop crack by texture.

What you have looks great. If the end bit stayed around longer, I think it would be more effective.

I feel the pointy mesh effect needs to be smoothed or just replaced with some fire particles. A good reference point is the wildfire from Game of Thrones (https://www.youtube.com/watch?v=Un6ocmns-B4&feature=youtu.be&t=93). 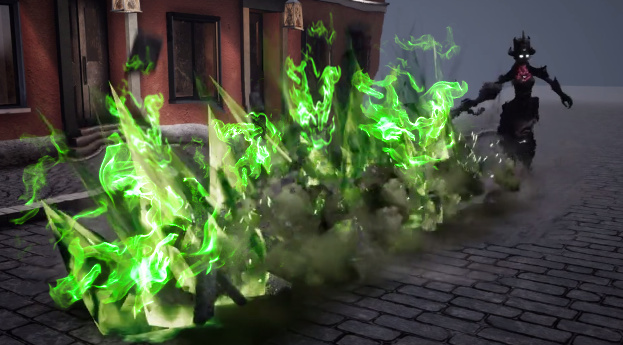 Thank you for your feedback sir and reference.
Maybe first sharp and at last make them like Aura…isn’t it??
I will TRY!
thank you again

I wanted to give you some feedback too. I agree with @FloydBishop and @Aran.Anderson. It would be nice if the outcome of the effect - the cracked ground - would be visible a little longer and if you could break up the shape of the green spikes.

Right now the crack feels kinda fake, because it just consists of a green lava-like texture and the bricks are lying on top of it without bothering and one can see that it’s perfectly plane. I would also suggest to add something like green steam or small bubbles coming out of the green crack to conceal the edge between the green lava and the bricks.

When the effect disappears it seems like the bricks disappear at the same exact moment. You could vary their lifetime and you could also add some scorch marks on the ground and let them last a few seconds longer than the actual effect.

Depending on what kind of game the effect is for you could maybe increase the anticipation. Right know it’s just the swing of the character’s arm which tells you that something is going to happen, so maybe you could add some sort of energy charge before the attack.

Just for presentation purposes you could add a slight camera movement (very slightly, like someone is holding it) and a little camera shake during the attack.

Have you thought about how the effect would work on different ground materials or about a case where the effect is not performed in a 90 degree angle to the tiles orientation?

I’m looking forward to see more of your work

thank you so much for your feedbacks!
im improving this fx currently, and i will try to make it better more than now with your feedback.

crack and bubbles!! sounds very interesting!!! i want to add this!

about character, i don’t really care about her actually i took it off already but yeah she should has some effects, after this i would like to put some fx on character like you said!
now i focus just that effect!

and other ground materials, i don’t worry about others! i just make other version maybe and control by BP on UE4.
yeah you know there is one big problem with bricks if i make this fx for another direction it will be very wierd!
so maybe i need to make Destruction
with general rocks without bricks,
and then i can make this effect on almost evey type of ground material.
(actually i just wanted to try to transfer Destruction sim from houdini)

i will fix camera after i finished fx!

maybe i can show you second take in a few days!
thank you so much i will keep post my other effects here!