I want to use this to affect particle systems as seen in the original post.
I dont know how these particle vector fields would work but i need help with it.
I’d like to see if you can make this with just a shader and not a script for it. No movement just particles avoiding the main source.

i dont know if this is possible with a shader or not but id like to try.

If possible id like for this to be possible without scripts. Though that might be impossiblee
Thanks a lot

You don’t need a script at all, you only need to somehow feed the position of the object that you wish to interact with into your shader somehow.

Thanks a lot, if i need to feed the position of the object i want to interact with. mhmm, im going to start thinking of a way to do it, do you think its possible with Amplify node shader tool??

Thanks a lot again
im truly inspired by what all of you make here, you have made me think of shaders and effects i could dream of creating without the inspiration from all of you

It should be possible, as long as Amplify gives you read access to whatever you decide to use.

I’m not familiar with Amplify though, so I can’t tell for sure.

what is read access? Im not familiar with these terms
Looked around but just saw masses of code no exact definition

ive been playing around in amplify and i can only come up with a way to grab the source objects position, not the stuff around it, any terminology thats used? Or any logic behind grabbing some elses position? If i know the logic behind it i can probably get it to work somehow

I remember using this, but only with shaderlab, I’ve not a clue wether Amplify can access global variables.

im able to make a Vector 4 world spaced is that viable? 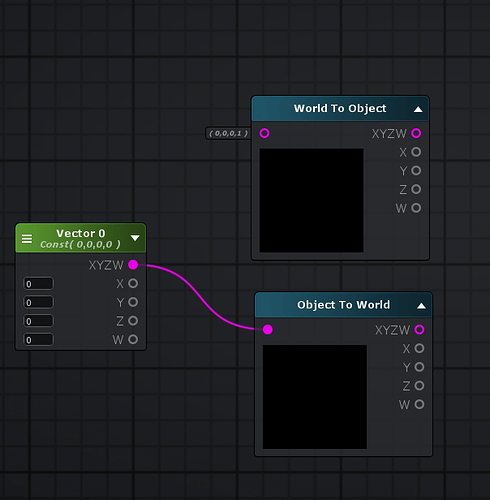 Right now the only solution is to define a global variable to grab the position from it, but the only way to do that is to use a script isnt it???

How would i do that with a shader only???