Hi there! I finally decided to participate in a monthly sketch instead of just watching the entries from afar!

Apparently I wasn’t the only one that was intrigued by the “Root” option of the sketch, and certainly not the first!

However, this theme gave me the opportunity to try a shader I wanted to implement for a while now, very much inspired by Gil Damoiseaux’s relevant work!

So I first started by creating the root shader with pretty promising results!
I’m now posting the proof of concept for the shader and, since I made the first post and probably won’t chicken out, I’ll keep updating on the effect and posting implementation approaches and breakdowns!

Let’s see how it goes!

Edit #1:
Found a nice reference for what I want to do, in Malfurion’s Entangling Roots spell from Heroes of the Storm. What I mostly like about this one is the way the effect spreads and how it conveys that the effect is happening in a particular area (so enemy players can possibly avoid it).

WIP 1
I have a first minor update on the effect, I added some humanoid players for size reference and changed the root mesh. A hasty put-together gif of the effect looks like this:

The process of modeling the roots is quite simple; it’s a cylinder generated from a bezier curve, which I modified to wrap around a cylinder (a potential target). It’s important to note that the UVs of the model should look like that, covering the whole UV space, since the root shader takes advantage of the Y coordinate. 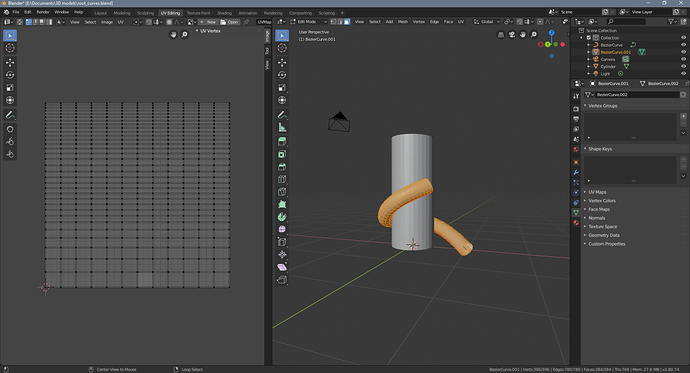 I had surprisingly less time for the sketch than I originally thought, so I’ll stick with this as the final version of the effect:

It was such an interesting theme and it was a good opportunity to work on the root shader! I’m open to any technical questions or suggestions/feedback on the effect (despite the contest being over). I’m also planning to share the root shader with a tutorial blog post at some point, but definitely don’t hesitate to ask anything about how it works!

Did you start with a sketch or you already know where you’re going ?

I usually figure stuff out as I go ^^" I’ll do more research on relevant effects later (and post the resources here) to draw some inspiration, but for now I don’t have any specific direction

ok thanks, good luck on this one

I will post implementation details along with the updates so you’ll get to see how the whole effect works! The basic idea however is that I just move a value from the shader that changes the appearance of the mesh. The trick is that the roots are curved cylinders (with the same thickness everywhere) and the shader just hides part of the mesh and shrinks a smaller part before the cutoff to a pointy end, so basically the mesh is actually there all the time, but I just hide it via shader.

Thank you! sir, I found your answer very helpful, as well as waiting to see your updates

UPDATE: I added more particle systems and a bit more context to the effect, turning it into an AOE effect, like the one in HOTS.

Made the super simple leaf/nature texture for the floor in Substance Designer like so:

The effect at its current state looks like that:

I’m still going to think of ways to juice it up and add more definition to it ^^
I’m open to suggestions, ideas, and feedback

Nice shader on the ground !

The leaves particles are too uniform for me, try to add some randomness in their scale, rotation and lifetime; also their timing is quite linear, maybe try to find a way to make them more like leaves, by making them falling down or something like that, or making them going faster at the beginning and limit their velocity really hardly because of their light weight (like when you try to throw with force a feather or a sheet of paper in the air)

Also, I was not directly looking at the roots, they are not enough visible imo, maybe try to scale them up a little bit and make them grow slower ?

Maybe there’s something to make with the green smoke too, we can clearly see the particles fading in (a bit too late I think)

The little green area at the bottom of the character is a cool detail, but maybe it feels too realistic for this kind of effect ? It does not really blend with the ultra-stylized leaves of your main area

And finally, I think you should try to add a complementary color, like a bit of purple in this effect, by adding some others elements like your leaves particles, this would be nice !

Anyway that’s a great start ! We got some Cenarius vibes here

Those are some really good points! Thanks a lot for the feedback! =]

recommend you break harsh edging between roots and the floor with a couple sprouting leaves/moss elements, subtle hints are all thats needed imo

Took @Spyro’s and @Torbach’s advice and I’m posting an updated version where I try to focus more on readability and enhance the visual result.

Still open to suggestions and feedback!