Got stuck early in VFX, need basic help or resources

Hi my Name is Nicolas,
I’m from germany and I started a Company about 2 Years ago we are working on a some would call it “Hearthstone Rip-Off” others would say CCG. :'D First of all I wanted to thank the amazing Jason Keyser for leading me here with his Videos.

Now to my problem:
As a digital CCG demands we need particles and animations for our player feedback. And I already did some, but I feel like I’m not getting any further. I think the reason is my lack of technical knowledge. For Example I can’t even imagine how Luke Mason did (Luke Mason's Sketchbook) something like the ice in his post.
And then there are things like Vector Boxes, or making something spawn in a shape (Hovl’s Sketchbook ice spikes) that isn’t given by Unreal, I can’t get a hold on.
So are there any general knowledge tutorials or mentor-ships that some one thinks are worth getting into?
It feels like in 2D and 3D right now, where at some point you just need to learn something fundamental, to get somewhere new. So you will be able to comprehend that what is needed.

Thanks to everyone who reads my post and thank you even more for the answers I might get!

Never been an example before, check that off my bucket list.
Good news is, you found the place. I am still a student and started making vfx just over a year ago, so I totally get the whole steep technical learning curve.

As you already mentioned, Jason Keyser’s videos are a great resource and where I personally started vfx. I don’t think you can get more fundamental than his series on the Artistic Principles of VFX

Every month this forum has contests, and often times people do breakdowns for techniques used. I’ve found myself just scrolling through the entries for pieces that particularly stand out and seeing if they explained their process. Events - Real Time VFX

I’ll do a full on breakdown of my ice effect when it’s finished, but its basically a spline moving a particle system, almost as if it was being pulled along a rail. The particle system spawns a bunch of meshes that point in the direction of the spline and I threw in some falling ice chunks for good measure.

I can’t speak for ErbGameArt, but this CGHow tutorial tackles a similar type of ice attack pulling up from the ground 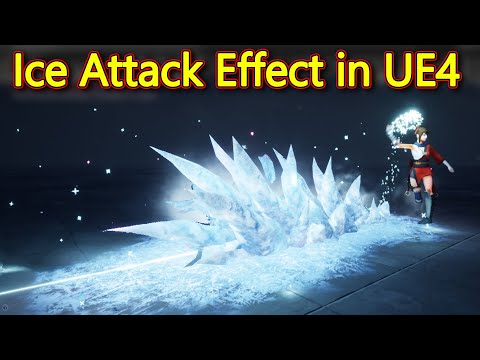 I’m certain more experienced people here also have some great places to look. Luckily, the vfx community is pretty open and any handful of google searches and forum posts should get you in some new, exciting direction.

ErbGameArt, but this CGHow tutorial tackles a similar type of ice attack pulling up fr

OMG, thank you alot. Pulling something along a Spline is so simple but I’m so dumb.

Pls link me your breakdown when you are done