I will try to get close to those handsomely handpainted fx by Alex Redfish:

Come on circle, we can do this!

Wow that looks really cool, love the style on it! Would love too see a breakdown how you did that later on.

Looking forward to see what you’ll do with it.

Edit: Or did my tired brain misunderstand and the gif is the the goal

Hey @Axelorio, I wish it was the progress ^^. Sorry if the initial post was misleading.
Gonna update asap with the first WIP, still a long way to go:

Good luck none the less!

Some wispy results while playing with noise inputs:

I love the cell shapes

Did you create them by subtracting?

yeah, well guessed. Some Simplex2D overkill subtracted from each other: 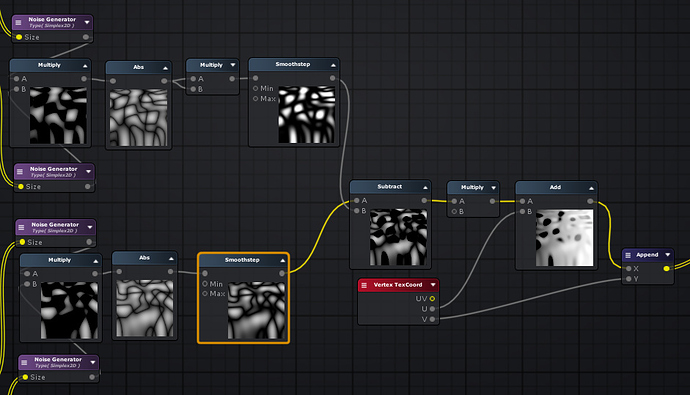 I’m a fan of the effect. I know that using the 3D noise node you can also pan in the z channel. might be interesting for flames.
I’m not directly trying to recommend noise because many people over here don’t like it but yeah

that panning in the Z channel part is very interesting. When I’m quite happy with the result, it might be cool to experiment with one of those framerate munchers!

here is the next iteration:

and with a bit more dynamic silhouette:

did some tweaking and cleanup, nearly happy with that:

Did some cleanup and a bit refinement too.

It is quite simple now, with two sine distorted simplex2D noises and the circle sampled two times:

added polarisation for a more cartoony look and made it work from all perspectives while still using only one plane to render on.

that’s very interesting! how do you let it appear so volumetric (especially from above) while using only 1 plane?

First I was lerping between two images for top and side view, but that gives that two semi-transparent things when the angle is inbetween. So fading UV distortions before the image input seems to prevent that.

Never used the same texture for top and side view, good to be allowed to use One Circle Texture only

how did you made these functions in material? thats awesome !!!

I think to let the fire pop a bit more, I would use a darker background and add some darker tones to the pedestal like if some coal would lay on it. Then, the fire should be way more visible.

Hey @Applaz_YB I tried to clean it up already, got stuck with a strange tiling problem when unifying the top and side UVs before the 2 noise functions.
So atm I have 2 seperate pairs of noise to distort the circle UVs.
Def got to cut these down. Then I’ll be happy to share the process!

Had the same bespoke tiling problems when fiddling with a voronoi flame in shadertoy, got rid of the weird tiling by reducing the texcoord inputs to the bare minimum:

Shouldn’t have gone that far astray for this contest though, at least the sidetracking gave me hope to wrangle the 3d flame into two noise functions again.

Thanks for your feeback @simonschreibt, will definitely apply that - your entry rocks hard btw!

It’s logical yet so genius… i have to learn a lot still… Great job!

wow.i am looking forward to your final result.