Looking for some critique and guidance if possible on my latest small project. I am looking to recreate some aura effects from the monks skill set in Diablo 3. I am looking to create an effect that reads “Healing”

This is what i have so far

I am happy with how it is going at the moment but i see a lot of room for improvement but i think what i want to achieve is outside of my skill set right now.

I remember watching the VFX talk done by Julian Love at at GDC and he spoke about colors of attractive auras and spells and also about the speed of them.

The speed being a great indicator of a spells intention, he used the question “is this slower or faster than the human heart beat?” The idea being that slower spells read as more attractive than faster ones. And that is kinda the idea i am going for here.

I like what i’ve done so far but i think im a bit close to it and would love some feed back! What would you guys like to see included?

Hey nexidian this is a good start so far,

The wave effect on the ground looks so on point tho, you nailed it ! but just thinking now, it could make more sense if the waves were going toward the player (like he’s absorbing it) not sure about it, but might be worth a try

woo! another Diablo fan!
I like it so far. The things I would change,
-the beams rising from the ground. I’m not a huge fan, It doesnt feel like a passive, the beams make it feel like a channeled charge up.

I would also make beams width over life time to 0 so it doesn’t disappear so suddenly. Also adding mask to fade out circle borders (waves) would make it blend with terrain better.

Other than that looks pretty good to me

Thank you i think adding the glow helped a lot! I’ve made some changes what do you think of these?

@pmiller I think you are right with the beams, i didn’t really like them either! I’ve taken them off now let me know what you think

looking great! I quite liked the beams, I think it looks great, without the beams I feel like its missing something around the character? maybe something to show it being absorbed? I liked the idea someone mentioned above about it going inwards but may try the beams but in a smaller size coning up and into the character?

Can I also show the effect of the same type? This is my first job. Made in Niagara. 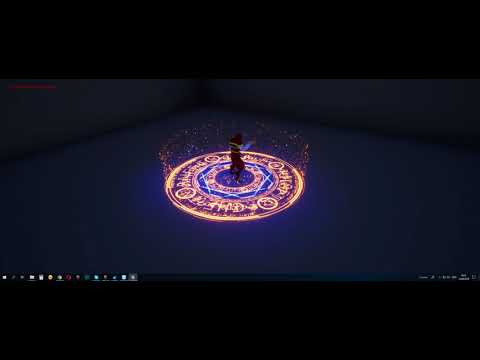 Thats awesome! It looks really nice for a quicker aura or the precursor to a spell effect good job man!

I really like the outer particles you have there