All of the stuff here is done in the Source Engine. Old, yes I know, but it’s still ticking in Garry’s Mod. Started particle editing in February 2015. Much progress has been achieved since then.
First thing I’m gonna showcase and ask for critiques on is a Daisy Cutter (BLU-82) bomb explosion effect. In the video I do a rundown of the main system, the alternate main system, and then its children systems. 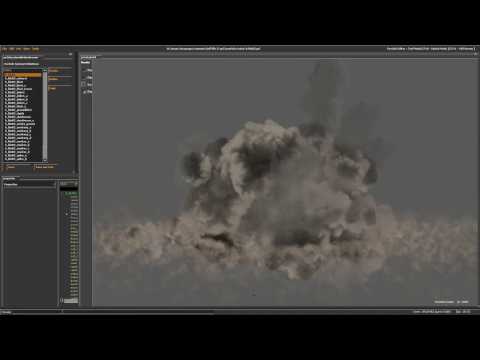 The sprites all have extremely directional shading. So when they initialize with the shadow facing upward or away from the blast, it reveals their nature. When that happens in a tight cluster, it’s less disruptive to your effect. If you don’t have normals for flat generic sprites, you might want to consider controlling their facing.

The shock ring looks like a graphic. It would be good to break up the texture.
I’m not sure what those half circle lens flare like things are suppsed to be…they almost work for lighting?

Your timing and velocity is nice, makes it feel massive. The slow rolling helps.

The main smoke texture isn’t the best I agree, but currently with what I have I think it does a good enough job for my uses. I could have them all face more similarly, but I think that takes a bit away from the ‘randomness’ feel you should get from an explosion. Alternatively I could just swap the texture, but at this current moment I’m quite constrained by time.
The shockwave ring looks white because in the editor, no map is loaded. It does warp the map around it ingame, but not in the editor (since no map is loaded there.) The sphere texture just adds a bit of coloring to the sky and ground as if dust was kicked up. It fills the gaps from the lingering blast wave, I’d say. I agree with your points.

I totally get the “deadline” thing. We’ve all had them.
My point is that there are places where it detracts more than it adds.
It would be good if there were more frames of it to choose from with slightly more ambiguous lighting.
If that’s not something you have time for, i would never suggest that you work until you’re dead, make a time machine, or sacrifice babies to a demon…as some of have done.

I’d say the biggest grief in that system is the sorting.

I’m not sure how shaders work in that engine, but have you tried using a sphere with fresnel and refraction for the shockwave instead of a ring? It might look a bit more like what you’re going for

The warping texture I’m using works just fine, it’s just a little to subtle I think. The regular sphere doesn’t aid the warp nor is it meant to substitute it, it’s just there to act like more dust. Thanks for the feedback!

New item(s) to critique on:
MOAB, Scifi thing, and Tsar Bomba (with some realism.)
MOAB: https://www.youtube.com/watch?v=EG_BADppkCE
Sci-fi: https://www.youtube.com/watch?v=MYVGPzXqdtE
Tsar Bomba: https://youtu.be/VLXJLbrL5-I?t=32
(Do note that the timescale in the Tsar Bomba initial explosion part is 1/100th normal game time to give you guys enough time to view what actually happens)
Take the scale of the explosions with a grain of salt, Source is very limited (But do grade it accurately to how it would fit if the scale were proper 1:1)

So obviously the whole smoke texture thing discussed earlier still plays into the MOAB and Tsar Bomba, but there are some different things happening too. First off, the thing I’m most proud of: the double flash on Tsar Bomba.