its here if anyone wants to try it out, materials work as well if i remember correctly 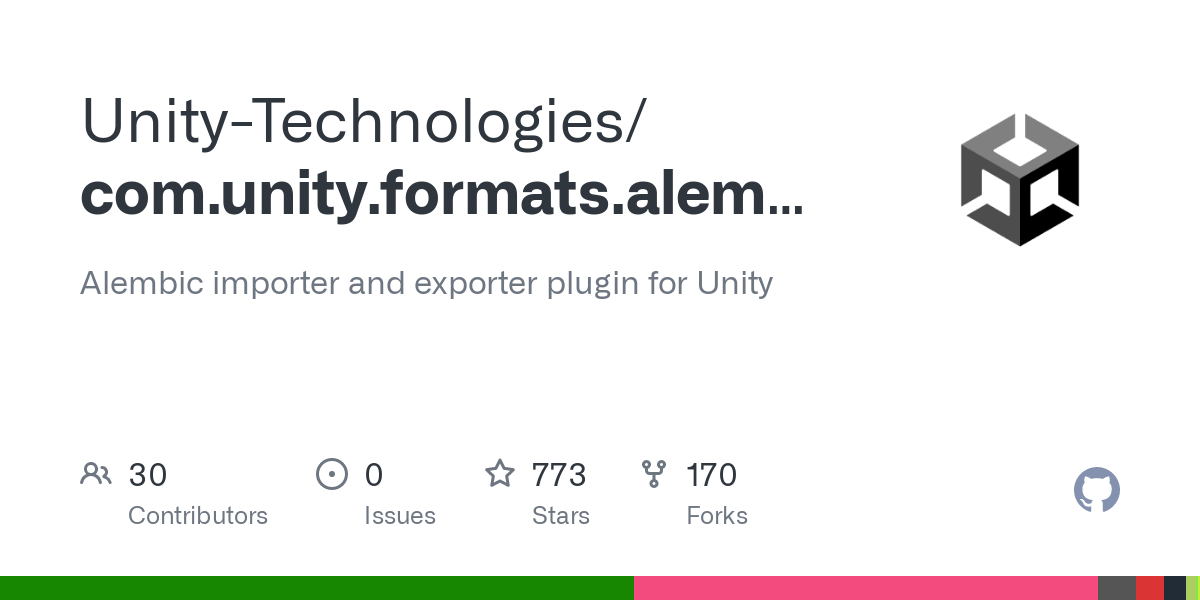 Alembic importer and exporter plugin for Unity. Contribute to Unity-Technologies/com.unity.formats.alembic development by creating an account on GitHub.

What is Allembic used for? Is it built into Maya or other 3D packages?

Alembic is an open computer graphics interchange framework. Alembic distills complex, animated scenes into a non-procedural, application-independent set of baked geometric results. This ‘distillation’ of scenes into baked geometry is exactly analogous to the distillation of lighting and rendering scenes into rendered image data.

Alembic is focused on efficiently storing the computed results of complex procedural geometric constructions. It is very specifically NOT concerned with storing the complex dependency graph of procedural tools used to create the computed results. For example, Alembic will efficiently store the animated vertex positions and animated transforms that result from an arbitrarily complex animation and simulation process which could involve enveloping, corrective shapes, volume-preserving simulations, cloth and flesh simulations, and so on. Alembic will not attempt to store a representation of the network of computations (rigs, basically) which are required to produce the final, animated vertex positions and animated transforms.

But functionally it is a way to transmit perframe information from one software package to another.

It is like FBX, but instead of a rig it is everything for that frame baked down into the final components. This means it is great for simulations with too many parts to let be skinned dynamically, and instead is just a list of every verts position at every step.

It is definitely more complicated than that, but you can think of it as very similar to a sequence of images, only instead of images it is the vertex data for each point, for each frame.

It compresses very very well. It is pretty cool, and it has been implemented into game engines in a variety of ways. Maya does export and import alembic files as do most content creation packages now.

Thanks for the explanation!

Does anybody know of any tutorials that would show practical examples of how to export alembic data and using it in a game engine like Unity? I’m still trying to wrap my head around how you’d take that data and how to reapply it for a realtime engine.

Edit: Duh, this plugin is for fluid. I’ll take a look!