I’m still finishing up the sketch I didn’t work on in time for a couple of months ago, but I couldn’t not attempt to put something else on my plate when I saw the theme is Cute Magic

For this sketch I want to make a cute little persistent effect that might go on a magical item of some kind. At the moment, I’m set on making a magical boombox that I imagine is pumping out encouraging J-pop anthems about love and friendship or whatever other sickeningly sweet things you can imagine.

Here’s a rough idea of what I think it will look like: 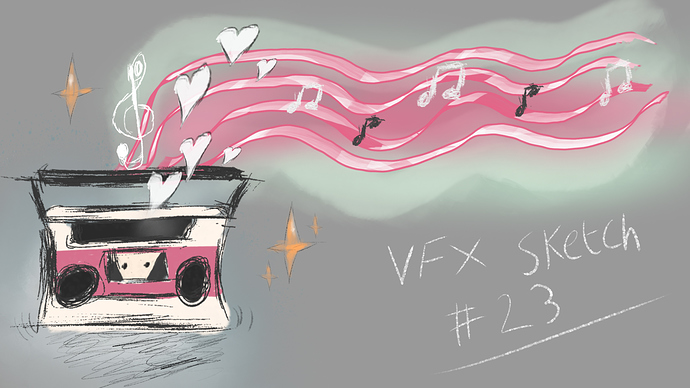 The alternative idea is a trio of instruments in a ring creating the persistent effect together.

I’m still deciding on what style the effects will take; part of me would like them to actually look a little on the sketchy hand-drawn side as if they were right out of a Peanuts comic strip. But if I’m not able to will that out of myself, then something more along the lines of the Bard spells from the mmo Final Fantasy XIV

In any case, my plan is to keep it as simple as I’d actually quite like to finish it in time this time, and really rely on the movement and colour to sell the cuteness.
My first step will be to make the 3 main sprites I plan to use: hearts, kira kira sparkles, music notes.

I’ve had a bit of time to think about/work on this sketch today, and started filling in various bits and bobs based on the concept.
One of my aims is to make it a lot less glowy, shiny, and busy than other effects I have done before, so all of the materials I’m using are currently unlit and using the emissive only.

Here is the work in progress so far!

The timings for a lot of it are all over the place as of now (possibly influenced by the music I’m listening to being different while working on different bits?!) and generally things aren’t quite meshing together yet.

Next time I work on it I plan to work on the timing, add some sparkles, and adjust the sheet music mesh to space out the lines a bit, and maybe then spawn the notes in between the lines, sequentially.
I’m also not happy with noise lines coming out of the speaker, as they spawn in a little bit of a chaotic configuration every time and could be a bit more uniform.
Also, tweaking the overall colours to be a bit more balanced.

Changes I made today:

I really like the way this is coming along

Today I ran into the realisation that the colours of the sheet music and effect overall were fine with a grey background, but as soon as I moved them into any other kind of environment, everything was washed out! Their transparent and pastel nature meant that the colours really just got lost on anything that wasn’t grey. Lesson learned…DO test the effect in various situations/lighting/environments.
I’ll definitely be more wary of this from now on.

Finding myself a bit low on time to find a nice solution, I just placed a low opacity, dark blue mesh directly behind the sheet music to help things stand out on the new pastel pink background, and also tweaked the colour values of everything a bit to keep it all as punchy as possible.

Beyond this, I only really managed to make some changes to the sheet music, added the pastel-y background, and other minor changes here and there.

Realistically I think I only have 1 more day before the deadline of the challenge to work on this, so I may have to leave this as it is. Ideally, I’d still quite like to animate the boombox dropping in with a little impact, and then turning on to reveal all the effects. I’d also still like to tweak the timing of pretty much everything to be more harmonious and in-sync. 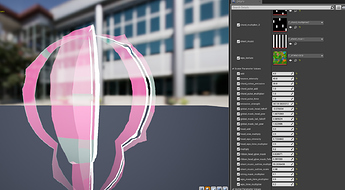 To that end, I will try to make time this week to make one more post that outlines my references and process a bit more comprehensively than I have done so far, for my own reference and peace of mind at the very least.