This is going to be my first time taking part in one of these sketches after admiring the previous work from afar. I’m a little out of practice with UE4, so I’m using this as an opportunity to re-learn bits and pieces and hopefully learn something new!

The idea I have so far is to create a kind of particle accelerator like effect that shoots a beam at a seed, which then explosively transforms into…(undecided, but probably a flower)

And here is a crudely put together 4 panel story board: 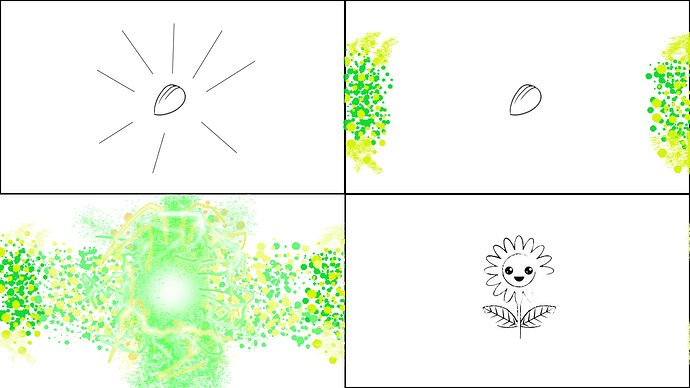 Hopefully I can manage to get something simple and clean finished by the end of the month!

Okay, so a significant amount of time has passed since I decided I wanted to work on this sketch, and since the deadline itself passed! It has been sitting in the back of my mind and I kept telling myself I would eventually make time for it, and I finally decided to set aside an afternoon to make some progress.

Before getting distracted by general life things I managed to make a start by setting up some of the textures I was going to use, and generally thinking about the individual elements.
This screenshot is as far as I got at that stage: 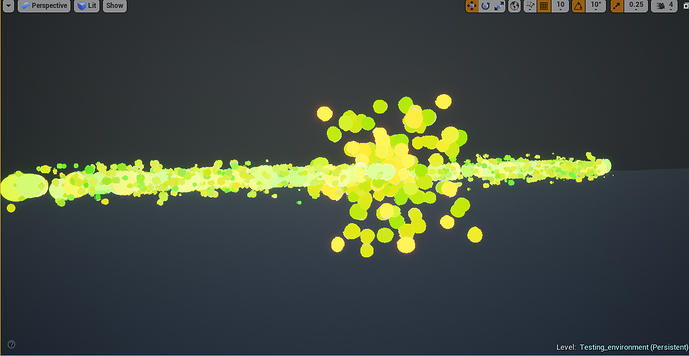 Immediate first thoughts was that it was going to be a bit of a challenge to balance the comicbook artstyle of the source inspiration against trying to sell the feeling of power with and energy/light with big bloomy emissives all over the place.
I toyed with the idea of maybe having some of the particles being unlit to keep the balance, but I think maybe I’ll just need to create some contrast with my colours to avoid blowing anything out and losing the detail of separate elements.

I spent this afternoon plotting out what the individual parts of the effect are, and how I might make them:

The Main Beam:
At present this is just a bunch of very large spheres emitting very closely together to give the impression of something more solid, but I’m planning on this being a cylinder with a bit of vertex animation and scrolling textures.
I’ll keep 1 emitter of smaller spheres around the outside of this, much like it’s set up in the above screenshot.

The main beam in my reference also has a really subtle glow around it that also has a faint half-tone like effect I’d like to add.

Where the beams meet, I currently have some spikey looking camera-facing sprites that are scaled by life. From my reference, this could actually look better and be less distracting if I have it’s orientation locked to one axis and give more room for the black dark matter-looking particles that I want on display in the middle, as at the moment it’s all a blended in mess and it’s hard to make out separate parts.

This is where I’m a bit stumped at the moment. I was hoping to have some orbiting invisible particles act as a target for ribbon trails to create some unstable looking swooshy lines around the convergence. I have since discovered ribbons don’t play nicely with orbiting particles, so I’ll need to find another way to do this. At present I’m using a blueprint spline to spawn a lot of small particles off, but maybe there’s a way I can also use this in conjunction with ribbons? (if you have any ideas I would love them)
The current issue with this is the blueprints are all more or less firing in sync, wit hthe only real variation being the path they’re taking via their respective splines. Is there a way I can offset their start times, with them all still using the same blueprint?

And this is where it’s at for now:

So I managed to do a little more work on this sketch this afternoon. The original cartoony essence of the effect has kind of gotten away from me with time, and turned into something else, but still taking ideas from the inspiration.
I had a go at creating the main laser beam with a mesh, but wasn’t happy with how it looked, and instead kept the original sphere like sprites for the bulk of the beam. I also softened them up a bit with a fresnel so they’ve lost some of the hard edge they used to have and look a bit more ethereal than solid.
The experiment with the beam mesh resulted in a beam-like aura around the sphere particles to give a all a bit of force.

For the most part, I spent today setting up the sequence and the various material parameter collections I wanted to be able to control in them. I haven’t used the sequencer for about a year (or unreal in general really) so it took a little while to readjust.

Next time I’m hoping to trim some of the business of it all, and generally polish up the colours, elements, and timings of everything, as well as add a final little explosion.