My name is Jo Lu, I just started into diving into vfx and am very new at it. I have a few samples of soem fx I made for a school project recently. I wanted to get some feedback on where to go and what improvements to make. Any feedback you may have would be greatly appreciated. Thanks =D

Pretty cool stuff. I don’t have much feedback for you since I’m still pretty new to this stuff myself. I’m curious about how the laser beam effect works though - did you draw that beam with a line renderer and animate its size or is it just a particle system?

I used Unity’s particle system,
I created 2 intersecting .fbx with the pivot on one side for the beam
In the particle system I set the starting scale to .2, .2, 6 so its stretched
In the size over time I have the x and y scale up dramatically in the beginning and drop while the Z scales exponentially to give the laser feel

image257×581 17.7 KB
I have to beam particles one for the center, concentrated beam with a higher value and the outer beam contains more color values and reduced values so it contrasted each other
The values is reduced over lifetime
there is a discharged effect that I used a cone that is stretched to the size of the laser and emits from volume, added slight noise for the movement
The rest are just glow particles at the start and the the ring
That is basically it. Hope that helps
1 Like
chipfunk May 7, 2018, 1:49am #4

Oh cool, makes a lot of sense. So if I’m understanding correctly, the mesh is basically just a cylinder, and you have two overlapping ones with the outer one slightly transparent to make it look like there’s a core and an outer glow. That’s a cool technique, I’ve mostly been doing my lasers with line renderers but haven’t thought about doing it with meshes.

Sorry, I wrote it wrong what I meant to say was 2 intersecting planes in a .fbx. Included image of what I meant: 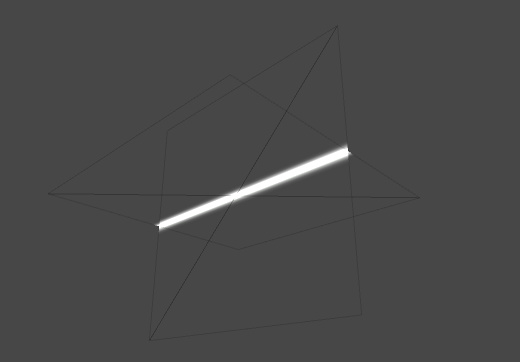 I discovered that it was less tris using planes vs cylinder

Everything else was right