I’m starting out in Unity and am having a problem with creating textures.
As an example, I’m trying to bring a crack texture into the effect that is simply applied to an already made shader. The problem is that if I import the image as a png without any background from Photoshop CS6, it simply shows up as a white plane. I tried the same thing using Krita and with that I at least am able to see the texture that I want and not just a white plane.
However, the drawing of the texture itself looks very weird and the lines are much thicker than they are in the drawing software.
I hope I explained this comprehensively. I can also only upload one picture in the post so if theres any other questions, please ask! 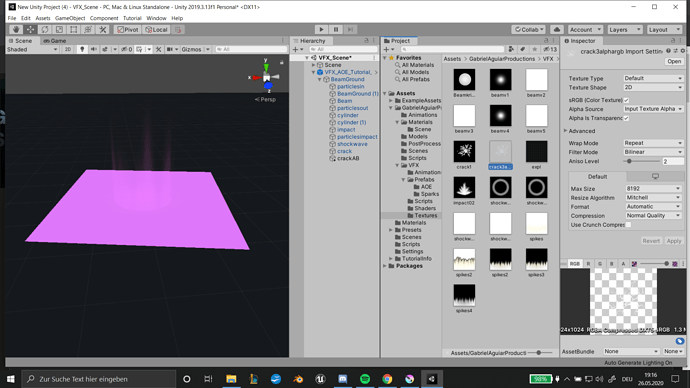 With just that one screenshot to go off, I’d guess it’s most likely an issue with the shader. Either the blend mode isn’t set to be transparent, or it’s not utilizing the alpha from the png. Is your crack texture solely in the alpha channel? Or do you have the cracks in your RBG channels as well? Hard to tell without any additional images showing what you’re using and how you’re using it.

the reason it shows up like that is because you have Alpha Is Transparency checked. unchecking that will show your texture on a black background, but to travis’ point your shader is not compiling correctly since it is displaying that pink color.

First of all thank you!
Here’s an image of the shader I use

Screenshot (50)1920×1080 219 KB
To answer Travis’ question, it’s in the Alpha aswell as the RGB-channel, from what I can tell in Krita. Do I turn the RGB off?
When I try to make textures in PS though, I have not yet found a way to see the separate channels in CS6. Is that because it’s an old version or is it just hidden?

If you’re just using an additive blend mode you don’t need an alpha channel. As far as authoring your textures with alpha channels, try saving as targa as 32 bit, just using a psd in unity, or using the superPNG plugin in order to be able to have more control over your alpha channel.

I am also pretty sure in cs6 you can see your different channels in the channel window. this is where you would be able to add an alpha.