I just start to study shaders, and AmplifyShader Editor, and don’t know some basics in both, so may be there are simple solution, but I don’t know where is some checkbox…

I have outline shader, which is works on common principle: offset texture up-down-lef-right, add to main texture - and it’s done. Shader works perfectly, it can coloring, thickness, all that you need.
It works with spriteRenderers.
But I use Unity SpriteAtlases in project, its created automatically (so it is not prepared texture sheet), sprites in atlas has different sizes etc. I can’t remove atlases by list of reasons, so…
When atlas is builded (in runtime), shader starts to work with all atlas texture instead of single sprite. And there is a list of problems.

First I tried to dig “how to render only part of all atlas texture”, but then I thought - SpriteRenderer already rendering part of texture. So I think in is not right direction. Though I can horribly mistake. (And I can get part of textture, I founded solution, and I will can develop this idea further if need).
Then I think about nodes in shader editor. I thought - may be I can manipulate offset of only part of texture? Such as: apply offset to some sample of texture (which looks like single sprite); cast this part somehow???
Or apply offset to UV, not texture; but in ASE offset node input takes only texture for offset. (Shader graph offset node, through, takes UV). 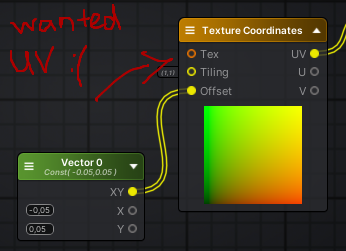 I’m stucked, and can’t understand basic principles; may be it is easy (though I think I would founded this in google, if it was simple…).
I need help with understanding in first place. Thank all who can clear this things

I continue great tradition to anser on my questions by myself (if someone will google it).
I make outline to work with unity atlases.
First, I discover error in shader. It offsets picture by picture’s size in percents, so if I had rectangle sprite (not square), outline thickness was different on width and height. And I founded calculations based on TexelSize; so input thickness (which is 1 digit) used for calculating outline widht separatly and height separatly.
SUDDENLY it fixed atlas problem. Sorry, my knowledge still sucks, so I can’t explait, why.

One problem still remained: atlas variants. We use MasterAtlas and AtlasVariants with 0.5 scale for weak devices. Outline was too thick with 0.5 scaled atlas. So I added property for calculating thickness; if atlas variant is loaded, script sends float=0.5 for this property. And thickness multiply on this scale. And all looks great.

So it causes material instances for sprites… But it is acceptable by now. I tries to use MaterialPropertyBlock, but it broked all - it is future problem =) 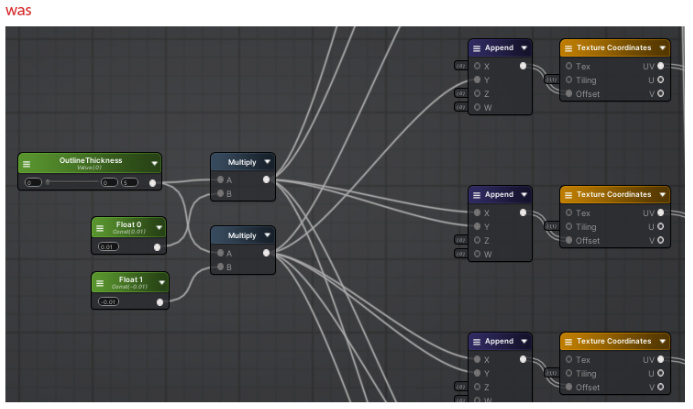 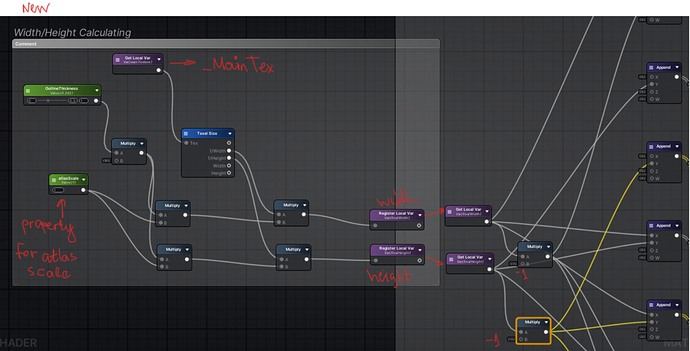