Hey guys!
I’m starting a bit late with this sketch, but it’s my first one, so I just wanted to give it a shot!

I’m planning to make a hologram that consists of little light cubes, which then gets cut into half by a light sword. The hologram is supposed to slowly dissolve from the slices area towards the outer vertices, but I didnt get to that point yet.

I’ve created a pic that should explain what Im trying to achieve. 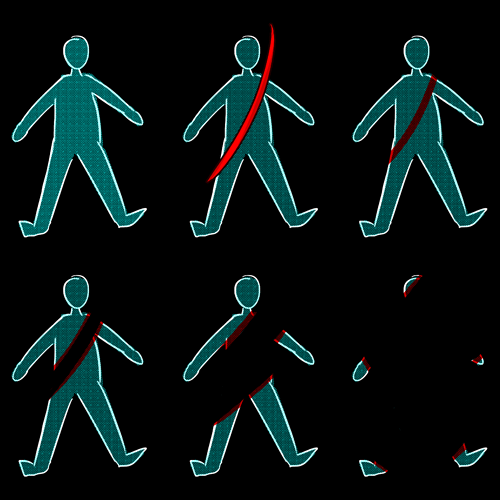 If anyone knows a way to create this effect of dissolving from a certain area, or something similar, I would be happy to hear about it! Thanks!

I haven’t done that type of dissolve myself but, if you’re using unreal, then my first thought is to experiment with the box mask.
here’s an example setup.

How to rotate output of Box Mask 3D Node?

I have a material with BoxMask-3D node setup like below to create a mask However, I cant figure out how to rotate the mask 😕. This is what I want to achieve How do I go about creating the above effect?

your light cube would need to be two sided and unlit. they would also need to have use a dynamic material instance so the mask effects each cube individually.

Awesome, I will definetely check that out later. I saw some shields that were made in a previous sketch that had an effect, where they resonated from the hit location of the object. I just dont know the correct teminology for that, so it’ll take some time finding that

Generally, shield impact vfx use a sphere mask(s) which spawn at the hit location and expand.

Since your project cuts a line through the mesh, a sphere mask may not look quite right. it could be worth trying though since the sphere mask is better documented so it would be easier to set up.

Oh i see! I’ve used the box mask to make object dissolve when going through a portal, i didnt even think about the possibility of using it for this. Since the masks even have feathering, i might be able to get different values to decide whether the next particle is red or vanished. Thanks alot cel!

This is what I came up with, still struggling with rotating it though. I’ll keep updating

Figured out how to rotate it over 3 axis, its getting somewhere!
Still trying to figure out how to make it more dynamic, so is dissolves from random slashes.

New Update! I added the sword, which will also be light particles later, and made it cut the character from random directions everytime. Also added another slash & fading red particles to make it look more dynamic!

Sword effects added, and changed the particle abit. The trail will be changed later on to something that fits into style.

I’ve added some new particles, such as the “generating” of the hologram and an actual trail that fits to the scene. Also I realized that I messed up something in the material for the masks, since the 2nd cut never never grew in size. It was always only the first slash that made the character dissolve into these faster moving, red cubes. I’ve changed the way the slashes happen, to prevent multiple attempts of weird slashes, where it puts two cuts on almost the same spot. Now its gonna always do 2 cuts from both sides, where the angles are chosen randomly from a certain range. I think I messed up the tesselation of the trail, I’ll look into that for the next update!
Here’s the current update:

Alright, I will call it off here, but I’m pretty happy with the result! I’ve fixed the trail, so now its smooth. Also I’ve added a new light & some meshes below, which I had lying around from a purchase on the marketplace. Let me know what you think! 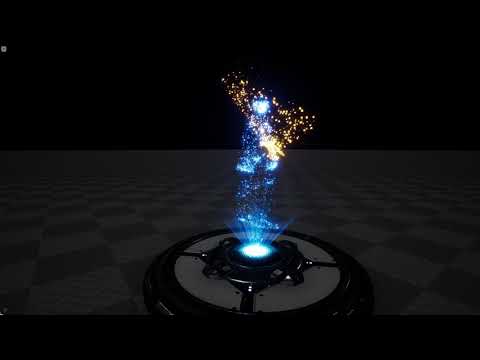