Thats a main stuff which im working on. Im not a math guy (im, probaby more like a meth guy

just joking), and unfortunately not a code guy, so the whole system are pretty rought approximation of 1st light bounce and, ofcourse, not physically correct, but im personally profess the point of view where “look nice or artistic > prysically correct”.
In some ideal cases the system gives really nice and pretty realistic results and illusion of light bounce.
Currently performance was measured in editor with a lot of stuff runned in the background like Photoshop and Google Chrome with a lot of bookmarks opened, and cost for 1 dynamic light are really not so big. But anyway, at the moment im not implement some features, so final performance cost will be different (and probably higher). But more or less, all implemented features will be have constant cost, cause whole system are scene complexity independent, which are good

Dynamic lighting with GI and any kind of simulation of GI comes to my mind after Alien: Isolation. The most perfect light in the video games in my opinion.
Basically i was start to learn UE4 after deside to make my own game in similar 80s retro-futuristic sci-fi style highly inspired by Alien:Isolation.
By many reasons i quickly realize what Lighmass system are look nice, yeah, but really not pleasure to work with beacause of a lot of unwrapping work, bakes, errors and artifacts, rebakes and so on many-many iterations!. Also lightmass are static as we know, and im clearly remember how nice and funny was light in Dead Space, as example, where you can shoot on them and turn them off! Bloody nice!
So, after trying of LPV (which are currently dead in UE4) and VXGI (also dead), i realize what i need something different, and by many reason RTX are not the answer.
After many trials and errors i think im, at least found the right direction to work and evolve, the system which i call - QIBL.
But that this abbreviation means?! Well, lets leave this to another post and updates

A little update. I just think what using some more well known assets and environments would be better to show off my work.

So, 1 spot light in the scene, marked with an arrow which used to generate bounce light. I think it look really nor bad. Lights are “playing”, bounce from the floor to underneath the coundertop in front of the window. And it looks nice

Cool! It’s hard to see the effect in the first video, but this one shows it off better. How does it work?

A little update:
Currently those indirect light have, lets say, a 100% “ambient light” characteristic. Which means where no specular component at all. Every objects with every materials from 0 to 1 roughness will be lighted as a fully rought material. It can looks normal, cause anyway those indirect light are important addendum to default or, lets say, “key” light, but its not a light itself.
But, metallic and any smooth surfaces should have some specular, even if they lighted with some highly diffused and soft light.
Cause overal system are relying on kind of trick rather than traditional IBLs, its impossible to implement classic stuff like linear interpolation trough multiple mip-map levels of cubemap and achieve changes in specular.
So, i add a stupid way to immitate mip-mapping sampling by scene roughness.
Well. It works. Not great, cause, well… its complitely not the way how it should be done ever! But its really-really cheap, no mip-maps, and add that missing “specularity” to every smooth surfaces like metals.
Bad part is what specular doesn’t mind view angle. But impleventing it more PBR way would needed more skills from me, and, im sure, will be more costly.

A little screenshot. Theres no default ue4 light. Only QIBL and materials on objects from 1 to 0 roughness, basecolor are 50% gray.
Specular are not quite right, yeah. Also there still no reflection cubemaps which will be implementing later. In those scpeenshots its more about dielectric materials. For metals, metallness scene texture will by taking in place and lerping basecolor with reflection cubemap. 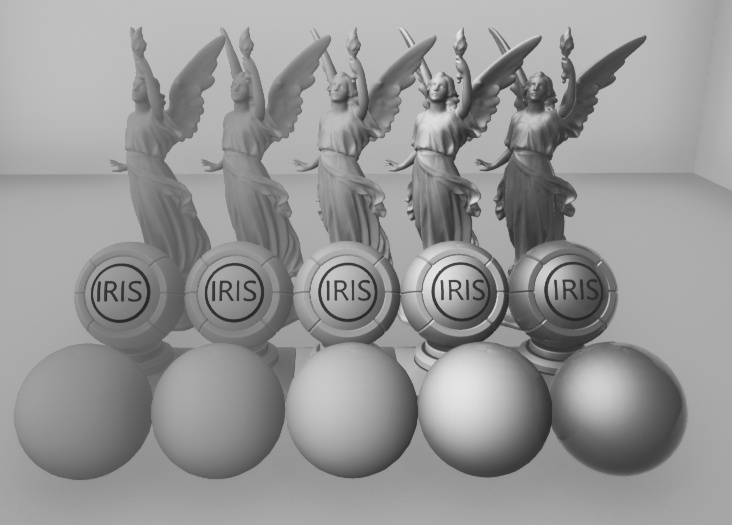 Its all are really-really stupid, non pbr corrected way of IBLs which mean - Image Based Lighting.
During to my low skill level and inability to modify UE4 sources, im kind of tricky/hacky impleven some IBL parts for ambient lighting.
I will probably explain how it works and why its call QIBL, not IBL, later, if people would be intherested on those things.
Currently i need to implement some other things and more important, make some performance test scene. If it will show some nice FPS i just build some demo and share.

Next plans:
Found solution for importance sampling (kind of…).
Test some really bad lighting scenarious which are not easy to work with with a system like IBL because of possible light bleeding, and light which are should affect scene only with indirect, but not direct light (imagine some light travelling trougth corridor 90deg corner turn, or some obstacles and so on).
Make some stress test with a bunch of QIBLs in dynamic mode.