Wanted to join the sketches for a while now, rainbow guns pushed me over the edge!

Started out with some quick rainbow sketches and made two concepts. 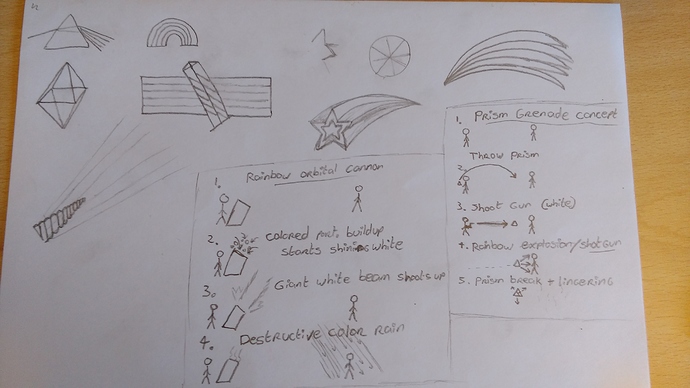 Rainbows make me think of colors, light and happiness. I’d like to find a way to bring out the dangerous ‘gun’ part, maybe by making the rainbow pointy or corrosive looking?

I’ll get something going in engine tonight after work, let me know what concept speaks to you!

I like the prism concept so I went for a quick first pass since I didn’t have much time tonight. Thinking about timing and how to tie everything together nicely.

Grabbed the free paragon characters Twinblast and Phase from the marketplace.

Made a prism mesh in houdini and did a fracture sim, this is what I want to throw and break. I’ll convert it to a vertex anim and control it with curves in cascade so I can still tweak the timing later.

Made a shader and colorful sparkle effect for the prism grenade!

I’m spawning it as a projectile in blueprints now, what do you guys consider the easiest way to ensure her light bullet projectile actually hits the prism? Add the light bullet as a second projectile with the prism as a homing target?

So the question is, how would you make the laser (hit) the prism as its falling?

I’m no blueprints expert, but I do kno that you could animate that, no problem in Cascade, and that’s how I’d do it. Just make sure to time it out, and spawn a mesh emitter, or a ribbon emitter.

Yeah, that’s what I’m asking. Thanks for the suggestion.

The reason I decided to it with BPs is so I can use spawn per unit for my sparkles, plus I might want to expand on the effect by being able to throw the prism where you want

Got most of the components working now! Decided on keeping it simple and doing everything in cascade, so I can focus on the looks of the effect. Too tempting to build interactivity

Also decided to go for mesh particles instead of a vertex anim for simplicity. I definitely still want to ramp to colors up!

I added a rainbow trail to the prism and did some timing, sizes and color tweaks!

When I tried to make the trails for the shotgun I ran into a problem. I couldn’t make them random solid colors. If I set them to a random initial color all the particles in one ribbon will have random colors, so the trail will be multicolored.

When I tried to do it with a texture the same issue occurred with a random scalar. How do I make data / color of all particles in one ribbon the same?

Nobody knows how to make randomly colored ribbons? Strange stuff, seems like a basic feature to me

In UE4 you can use some rainbow texture and randomly (dynamic parameter with unit scalar) pan it.

It will pan it per particle if I use a random scalar, so I’ll still end up with multiple colors in the ribbon

I think I tried doing this before and nothing worked. Maybe there’s a solution with random seeds, but I couldn’t quite figure it out. I ended up with multiple emitters.
If you duplicate and share and then use a dynamic param to drive the texture variation, it’s still relative easy to handle, you’ll at least have the same amount of materials and are only sacrificing some extra cost for the particle sim.

You could also use dynamic parameter but it would require 3 of 4 slots of it. Anyway you would set them to uniform between 0 and 1 - same for all 3 (think of them as R G B channels). In the material editor you just need to append them into vec3 and plug it into emissive or whatever you want. I don’t think it’s efficient way but at least it works.

Don’t forget to check Spawn Time Only checkbox or you will have them changing color each frame. 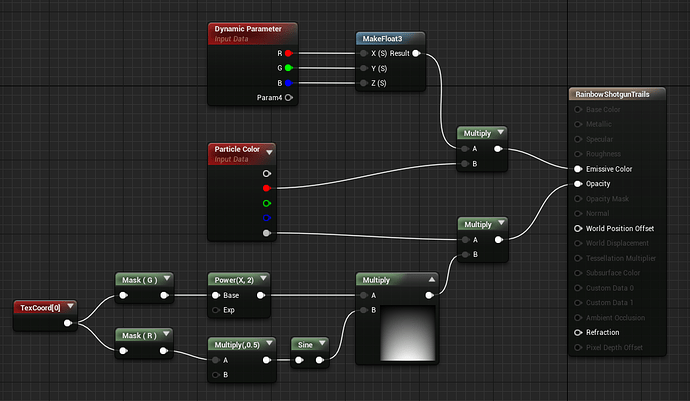 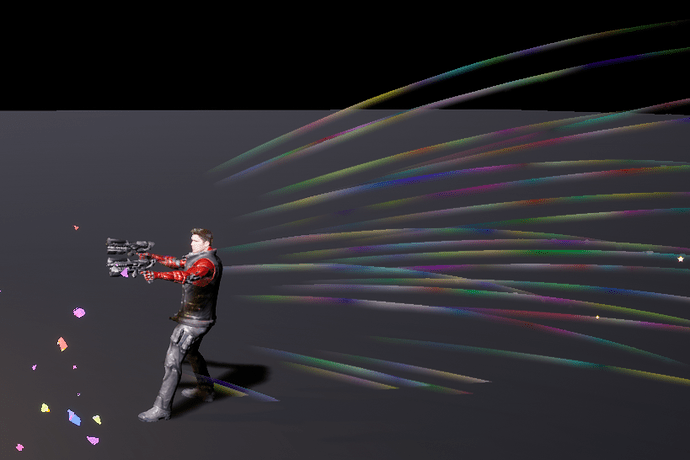 That’s one of the solutions I tried at some point. It keeps the colors consistent but you’ll end up with overlapping trails, unless there’s a way to make each target particle unique across different emitters? 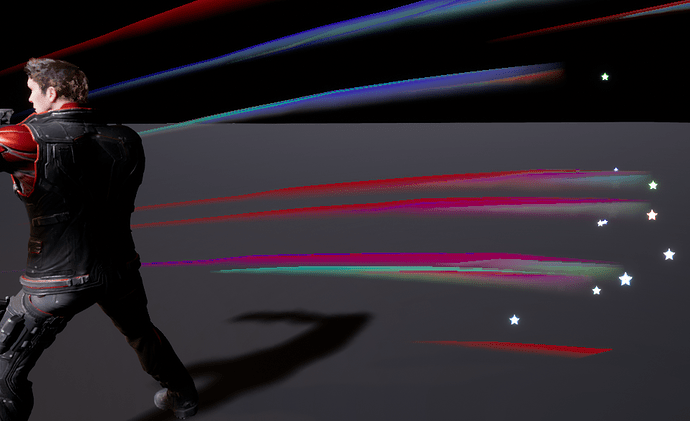 Thanks for the replies guys! This one’s been bugging me for a bit now

@Pumpking
Yep, you will need to duplicate your source emitters as well.

@Gimil
The issue with uniform params inside ribbons is that the randomization occurs for each particle inside each ribbon instead of a per ribbon basis. Your ribbons most likely consist of more than one particle, so you’ll end up with randomization all across your ribbon.

Yeah I didn’t really checked it with ribbons but with single sprite. My bad :P. Then I can’t think of any other way than the one you mentioned.

Ahhh yeah, I didn’t realize I should duplicate my source emitters too then. Thanks man, I’ll make a gif to send this one off tonight

Duplicating the source emitters got me where I wanted, thanks for the advice. Since I’m already overdue and busy with different things, I’m calling this one done like this