It’s been a while since my last sketch! But I’m throwing my name in the ring? Is that how that goes?

Anyways I’m gonna be taking this sketch to improve my slash effects since I wasn’t happy with how my last one came out a while back!

I started out by making some really rough and quick ideas for slashes that I might want to do! 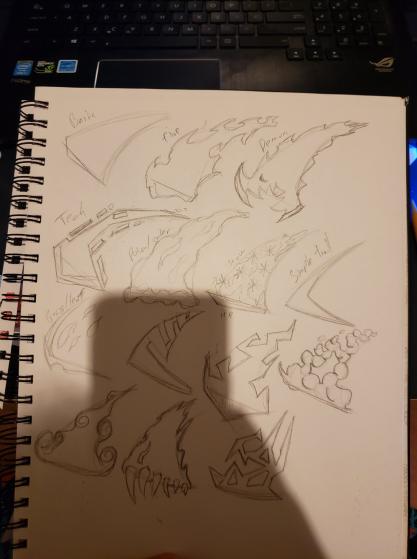 starting a basic set up so I can start implementing slashes quickly. Which included a simple sword with an animation and some mesh shells to apply shaders on and a trail:

And of course where would we be if I didn’t show some of the things that didn’t go to my liking, or just forgetting how uvs work out right!

My current goal is to make a flame slash to start out with. I feel once I have the proper shader to do so I’ll be in a good spot to take that and make some dope tweaks with different noise and timings.

My most ambitious goal right now is to make a prototype slash effect inspired by Orphea in Heroes of the storm. As her effect aesthetic is one of my favorites 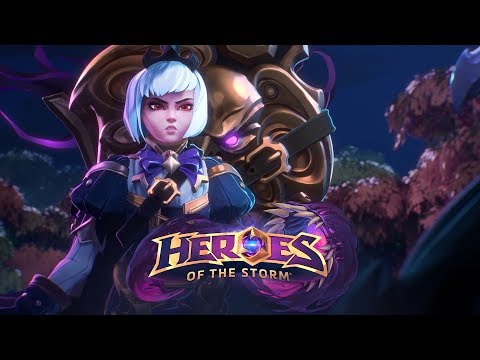 I really like the feeling of that slash, it doens’t look like a perfect circle, it feels organic.

My most ambitious goal right now is to make a prototype slash effect inspired by Orphea in Heroes of the storm.

Are you going to create a hand drawn effect? Would be cool!

Those concepts look great, I like the second one in the bottom row.

Thanks so much! I’ve been really pushing myself to learn Amplify since I can’t use shader forge past unity 2017.

That bottom second one is actually the orphea inspired effect. As her kit is like this living miasma / venom kinda feel. I’m not sure how I want to approach it there are a few angles I can go about it but I haven’t settled one yet. I’m still trying to meet the baseline right now!

So I went ahead and tried to make a cleaner texture for the trail. Oddly enough it also works as the enchant mesh texture as well!

Oh right I didn’t mention that yet!
So I actually have two meshes that are kinda scabbard like that cover my sword. I’m using it to give the sword an enchanted feel. So if the enchant is fire I can place a flame like texture on it to go with the trail. 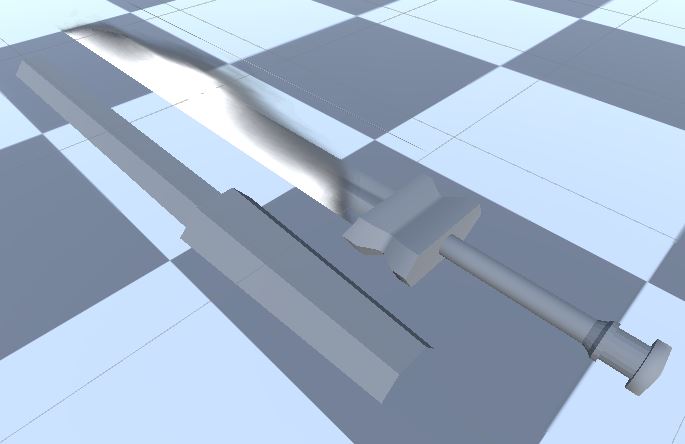 I also made a much smaller mesh that stays by the hilt which acts like a kind of muzzle. I haven’t implemented that part yet, but the idea is:

I’ll try to have that up by my next post.

I’m interested in seeing how you’ll tackle the more interesting breakup shapes from your sketchbook no these trails.

ALRIGHT! It has been a few days since my last update! I’m in a much better place to start hammering out more effects. I also changed the animation to better incorporate the timing I had in mind for these effects.

So as a default:
#Basic Slash

And the more Experimental
#Flame Slash

I do believe I have to update the model for my sword effect shell. Which I actually did for the basic slash (which was the second created funny enough)

I did however notice a misalignment with my trail that I’m still working on fixing but progress is progress.

And of course, because I forgot how animations and animators work. I broke things before I got them working appropriately. As such I present you. . . . The goofs:

I’m interested in figuring it out too haha! I’m really trying to push beyond my current knowledge using the tools I have now and experimentation. And I have some ideas of things that I can do.

Hmmmmm today seems to be a struggle bus but that’s ok! I’m working on what i’m calling my “Vector slash” Which is row 3 slash 2 of my sketchbook but I can’t seem to get the trail right which is the main focus of that one.

I’ve been tinkering with different methods and I’ll be tinkering with it some more. still got 4 more slashes to work on so I won’t take too much time on it.

Another in progress shot! Always working on making that dope Ice Shader!

I’ve made one before while back but one can always do better. I found a good reference and I’m really taking the time to dissect and understand what’s going on so I can learn.

The mesh being used is my general shell for the sword swipe but I plan on making one specific for this.

Awww dang. I’m finding myself frustrated, I ran out of time to finish this months project like I wanted. But I still have few more gifs to show at least.

So I found that the swing didn’t work for a some of effects I was going for. SO I switched it up with a sword thrust which is still a slash in a sense.

Then I dove into my more tech|stylzied thrust, though I found that the trails were being extra wonky when it came to the first iteration.

And then I reeled that back into a less noisy one.

Finally I was trying to breakdown how I wanted to do the slash in the style of Orphea’s aesthetic and got stuck down the shader rabbit hole.
https://imgur.com/HfpxpgR

So I was able to get that gross slimey feel by updating the ice shader I had worked on prior and with that I got started on the last effect. But this is as far as I got unfortunately.

Overall I got better in different aspects and learned a bunch, however I wasn’t able to complete the challenge in time, so that’s quite the bummer.