here’s my first pass at my TGT Competition entry:

Basic logic is blocked in, just need to work on the actual fx now and then the timing and polish.

What?! Haha man this is extremely fancy. Awesome idea. I’m following this one =]

update with some effects - reasonably happy with it but might spend another day polishing later.

I’m actually interested to hear how you went about this! It feels really seamless. Aesthetically it would be cool to see a bit more variation with the colors your using, it feels a bit desaturated. Looking forward to more!

It’s 3 blueprints - one for the panels (using different meshes), one for the electric sphere effect and one for the overall object. Each one contains the logic it needs to do the things that it does, mostly though timelines and then they trigger functions off in each other to communicate.

I’ll upload the project files when i’m finished with it so you can have a look if you like.

Hopefully i can find another day next week to add a few more bits and have another look at the colours.

ok, so not really happy with where things were going this so going to start over with some similar themes and techniques.

heres a quick concept sketch but i really cant draw 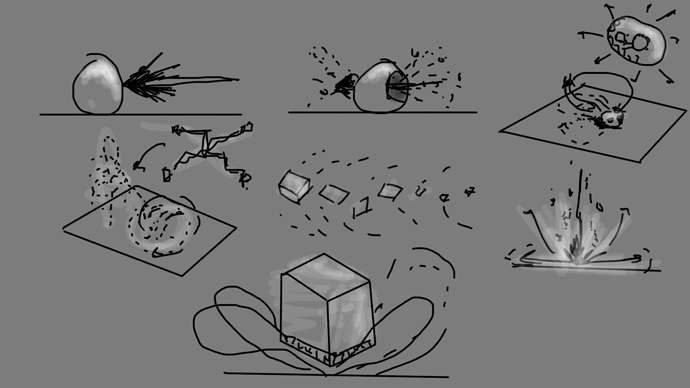 so finally had some time to quickly block out my scene - the projectiles are going to knock pieces off the sphere and then explode it and draw the pieces up into a whirlwind and then a big explosion/implosion to bring them back into a cube at the end, or at least thats the theory anyway - we’ll see where things end up!

Nice man, looking forward to seeing more of your progress! Just presentation-wise it’s hard to see what’s going on. Might be a good idea to pull that camera in or do a 3/4 view so you can capture it all at a closer range. I know this is a blockout, but a couple things to keep in mind as you move forward are color, value and shape variation. It’s very easy to settle on sparks for the majority of your effect, but adding a bit more variation can go a long way in spicing things up

. Looking forward to the update! Woo!

cheers for the feedback man - yeah the sparks are just super placeholder for now, really just wanted something visual that i could move around to get the timing started.

todays update with some mesh animation work done - hopefully tomorrow i might actually get to some effects!

I love how the particle trail directs the motion of the scattered pieces, really cool idea so far!

Nice! This one feels more like a weapon than a lot of others. Probably because the disintegration part feels a lot like a destruction of the original object

FX Pass udpate on my TGT Entry - going to leave it for a bit now to settle, but might have some time for a bit of polish next month!

This is rad! Great job on everything.

Wow, I love this one! Great motion overall!

Awww…it made a little house for itself!