I am currently trying to solve a certain technical art challenge I am facing. Not sure, if this is the correct place to ask since most of the posts seem very artsy and less tech art related. Are there other forums/discords you could recommend for people wanting to learn the tech art side of things regarding VFX?

Now, to my main question:
My goal is to create a shader (and script, if necessary) to fill any mesh with a gradient. The challenging part of it is that I want the gradient to always be level to the ground. In other words, the gradient should always be top to bottom while my mesh may rotate.

The first thing I tried was using world space or various approaches to triplanar projection, but I always end up with the same problem: I want the gradient to “scale” with the mesh. So, imagine having a gradient going from full white (1 - top) to full black (0 - bottom). Now, I want this gradient to fill my mesh from top to bottom. However, when I rotate my mesh, I want the gradient to adjust itself to the “new height” of the mesh so that it still goes from full white at the “new top vertex” to full black to the “new bottom vertex”.

Ideally my gradient would also scale up, if I scale up my mesh inside Unity, but it’s not a high priority. My main concern is that I want to be able to give a mesh a gradient that’s always level to the ground.

Any pointers would be really welcome!

Many of the things people post here are technically challenging, not just “artsy”. What you need is to get the absolute world position, transform it to local space and divide it to the local bound size of the object (get the minimum and maximum height of the object in local space), then just mask the height axis and you would have a height gradient. That is the way we do it in Unreal. 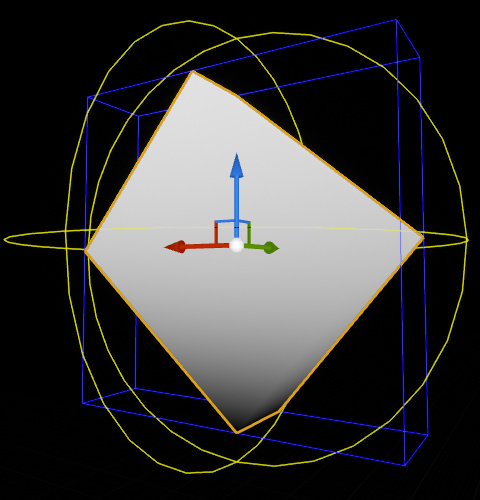 See the blue lines? That’s the object’s bounding box. You’d need to access that in order to create a gradient. Here’s how to do it in UE4:

I am not that familiar with unity but you can solve this by just using basic linear algebra. you could just use the local space location and the rotation matrix of your mesh to just perform object to world transformation without the visual scale. then use the resulting height value to make the gradient. if you don’t have access to the unscaled transform you could make this a material parameter.

Thanks a lot for all the answers, I really appreciate you sharing your knowledge! I’ve also asked this question in a Discord and someone helped me and basically came up with this solution in Amplify. It works perfectly, but I don’t feel comfortable with the math behind it and would like to demystify every step to fully understand what’s happening. I think that fully understanding the math behind what’s happening here could be super beneficial for me with future shaders/vfx.

Maybe someone could explain this like I’m 5 years old. I will try my best to start to give you an idea about how much of it is clear to me right now:

Question: While I understand the basic principle behind it, I’m a little confused about the spaces and the math behind it. What exactly does the “World Position” node contain? Is it the position of each vertex in the world space and the “Object to World” Node is a single position so that each vertex is moved by the same amount?

Question: I guess this is the part where the gradient is “stretched” to the size of the bounding box? Can someone give a simple example how that stretching works? I have trouble visualizing this step. At this point we only have the translated position for the gradient, but what exactly is getting divided now and what for?

Question: If it’s just to offset the gradient, why did you not move it up by 0.5? Judging from the way you came to your result, there’s probably a logical step, which could help me understand things a bit better, which in the ASE version was just cut down to save a node.

Question: Why do I need to saturate the result in the ASE version? Why wouldn’t be the values be between 0 and 1? Didn’t we stretch and offset the gradient perfectly already? And for Bruno’s UE version: why are you using the Frac node?

Would be cool, if someone could shine some light on my questions and please correct me, if my understandings are incorrect somewhere.

Alright, so let’s break this down a bit further:

1 - The WorldPosition node returns the absolute world position of each vertex (or pixel, if it runs in the pixel shader). So that means the position is centered around world 0,0,0. By subtracting the object position, you’re basically re-centering those coordinates around the object’s position instead of world 0,0,0.
In your example, you’re transforming 0,0,0 from object to world space, so it basically returns the object’s position in the world. It’ll return the same value for all vertices/pixels.

2 - In Unreal, the ObjectBounds node returns the xyz size of the bounding box. Dividing your position above by that will bring your values to -1, 1 range, relative to the size of the box.

4 - The saturate node just clamps all the values to the 0, 1 range. It’s good practice to saturate things for safety, it has no perfomance cost. If you plug a value outside of the 0, 1 range to a Lerp node, it’ll extrapolate the values and can give you really weird results. Frac does what you describe, but between 0 and 1, looping back to 0 once it reaches 1 (Fmod wraps around an arbitrary value instead of 1, for future reference). I plugged a Frac just to visualize things, since it makes it more visually evident if your values shoot past the range.

5 - If you plug the result from mine into a Lerp you’ll get the same results!

I’ve tried working with this, but there’s a bug and I just can’t seem to find the cause for this. My shader works for quads, boxes, sphere and capsules, but it will start go get buggy if the shape is a bit more irregular.

Here’s my result in scene view, the green box is the bounding box I calculated via script: 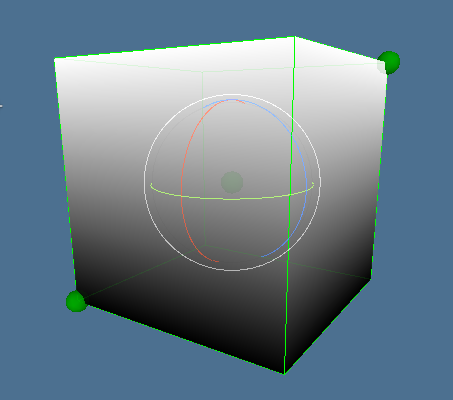 The offset in my version is required because Unity works differently than Unreal? Here’s the whole thing without offset: 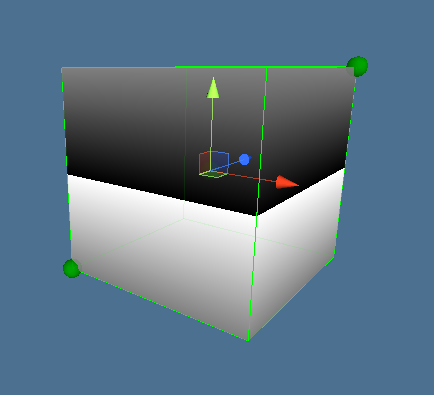 And here’s a more irregular shape, which shows my problem with the shader:
https://imgur.com/a/ydKW3mD

Hope someone can help me out with this.

Maybe the problem is related with the difference between the bounding box center and the object center, in more complex shapes.

Then, rewrite all positions based on this bottom-y position. Something like,

or, in your Amplify Shader replace the Object To World node with a variable with the y_bottom_box info (you are only interested in the y-component of all things)

I think, this “y_normalize” is exactly the gradient you are looking for.

This works beautifully, thank you! You will have a special place in my heart from now on, because you saved me from going insane

I’m trying to create a similar effect with ASE. Would you mind sharing your final graph?