I’ve been working on this stormy cloud and I’m struggling with some technical difficulties.

I recieved some feedback to add an anticipation to the thunder (https://imgur.com/a/1qhCipT), but I can’t make it spawn in the same location as the thunder. (You can see it dancing around in the sample video).

I managed to group a bunch of effects to spawn in the same location using the EventReceiver Spawn, but I can’t seem to delay the spawning, so I can’t use that for the anticipation emitter. Does anyone know of a good workaround for this? If you have any other unrelated feedback that’s also very welcome.

As a bonus question, if there’s a way to avoid the plane clipping with the screen flash that would also be great. I’d like to have the whole screen turn bright.

Is the thunder a particle system that you spawn from a blueprint? If that’s the case you can just spawn the anticipation at the start of the emitter and set the rest of the thunder to spawn at Time=0.3 for example. 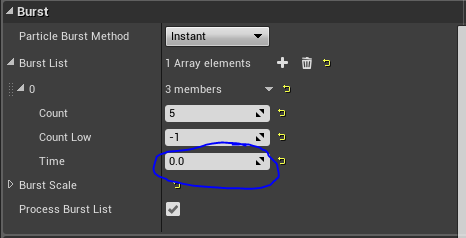 I’m not sure if that works for you as I don’t really understand how are you going about spawning the effects, it sounds like you’re doing all the work in the blueprint?

Hey! Thanks for the reply!

I’m not using blueprint for this. I’m using an Event Generator and an EventReceiver Spawn (both in blue). You can toggle an option to spawn the Receivers at the same location as the Generator, but there doesn’t seem to be an option to delay the spawn. 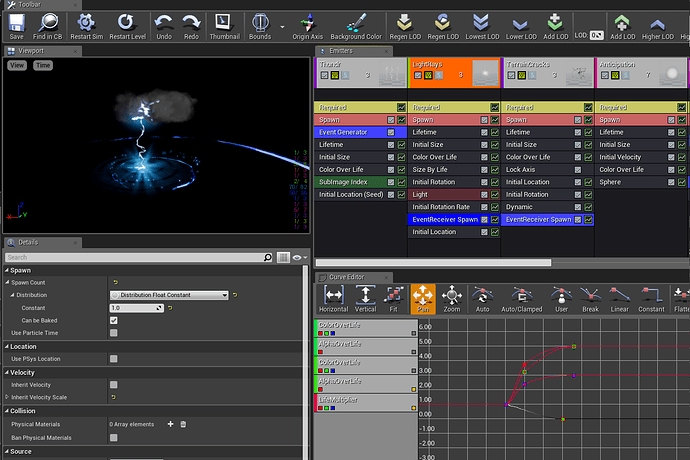 I’d like to avoid blueprint if possible, but if that’s the only option I guess I’ll have to start learning it. At least to use in the “Anticipation” emitter.

Maybe you can work around it by spawning the emitter with transparency and make it opaque after a couple frames with the Color over life. I’ve never used eventReceivers though, I usually go for blueprints with these things.