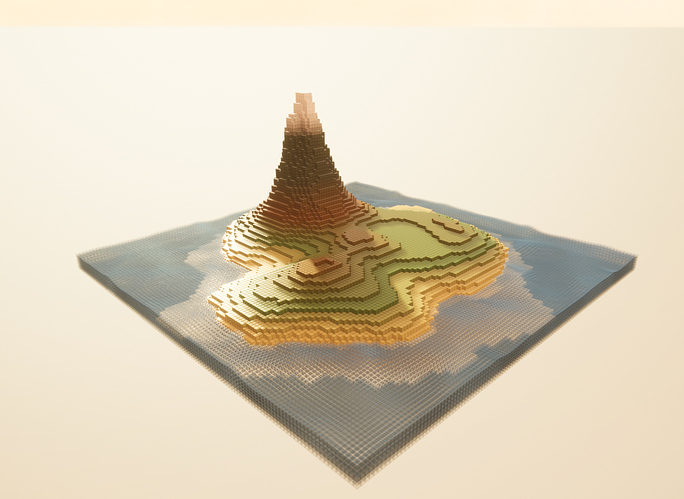 The idea is to generate a voxel island and create a cataclysm that destroys the whole place. For now, I want to spawn a black hole attracting each cube. I already have the generated voxel island with niagara (it samples a heightmap). At first I’ll improve the generation and create a water level system. It’s really rough for now. 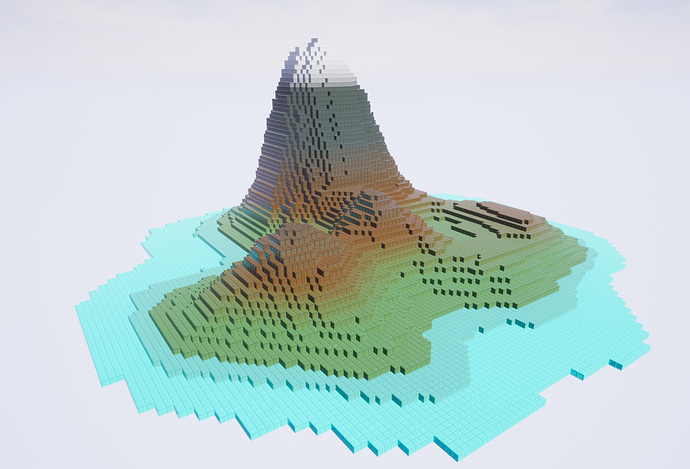 I’ve made a water level system. I’ve reused the island generation system to create water only in places where a island cube was not generated. I’ve also made generated particles on edges of the surface, the water is not filled, it was essential to not have a weird rendering with water cubes transparency (also it’s way better for performances).

I’ve made a lot of tests with physics. I wanted to make a black hole attracting particles but explosions are way funnier x)

For now it’s just a collision box retaining particles inside with some increased drag when particles fall into water. I wanted to make particles collide each other with simulation stages but I think it’s not really interesting to go that far (and it will be really expensive). Next step, I’m gonna make thos particles collide with the island, I can do this sampling the island heightmap and substracting the hole area calculating collisions into a the explosion sphere.

Lastly I’m gonna make a falling nuclear bomb into the center of the island.

Here’s my progression for today. I’ve made a bomb particle system that fall on the island and triggers a huge nuclear explosion.

I’ve tried to make the explosion the most impactful as possible adding an anticipation frame when the bomb collides with the ground.

For now, explosion is a glowing cube, a WIP nuclear mushroom + some screen shakes and post processing effets. Everything is animated in a blueprint (with timelines).

The bomb is also made with cube particles.

I made a module to spawn particles on a line (between 2 points) and used the normalized execution index to set the color and the scale.

I’ve made a lot of improvements

Now I have an entire nuclear mushroom !

I also added some collisions on the island and the crater. Instead of calculating collisions between each cubes (what would be expensive), I sample my height map and subtract the explosion crater with a sphere collision calculation to make my particles collide with the final island shape. It’s not 100% accurate but it works pretty well without destroying performances.

Also to improve anticipation and stylize it a bit more, I’ve added those camera plane relative flares on my rocket reactor, on the implosion and at the very beginning of the final blast.

This is lovely! The spawn effect really ties the whole thing together