Hello! My name is Maggie and I am a newer VFX artist in my senior year, looking for some help and critique on a portfolio piece I am working on. I am aiming to make a solid magic effect in Unity’s HDRP. Any help and critique is greatly appreciated, especially when it comes to working with shaders, as it is something I haven’t had a ton of experience with quite yet. Here is the concept image I made for the effect: 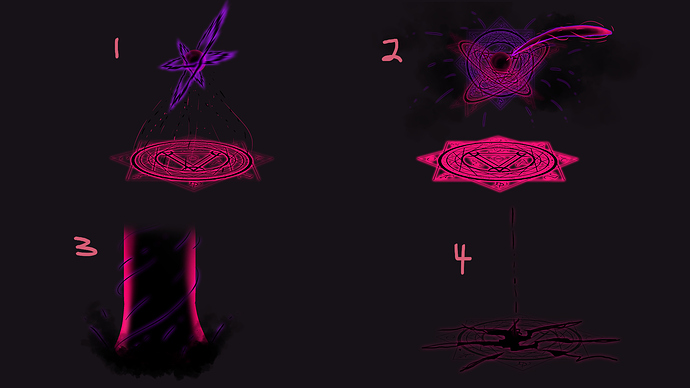 and here is a video with my current progress on the effect:
https://youtu.be/gbT1IvXnJ3A

Thank you in advance for taking the time to look at my effect, and for any help offered!

Hey Maggie!
I think the concept is cool! It’s showing off some more aggression in the effect than your actual effect does though, which is really cool! I think your effect would benefit a lot from looking more like it.

Right now your elements are working a little against each other. Like you have this symbol that comes into play and covers the swirling particles (at 4 seconds in), but it doesn’t react to the swirl exploding and turning into a projectile (around 16-17 seconds in). The same goes for the big symbol that slowly grows in. It doesn’t react to, or support the projectile at all. Both of these elements should be supporting the build up of the projectile one way or another.

You could for example have the first symbol that covers the swirl shrink over a very short period of time just before the projectile shoots off and the swirl explodes into particles. This could be the que for the other symbol to quickly grow out and slowly fade out. But please do experiment on how they can support the projectile.

The particles that shoot out when the projectile is shaped (at 16-17 seconds in) and shoots off really need to have more speed in the beginning and then slow down. Use the “Limit Velocity over Lifetime” module in shuriken to make this happen. (They should be moving like 5x faster in the beginning but slow down quite fast)

The same goes for the impact, those particles are moving too linear as well. Start fast and then slow down, just like you animate the big mesh pillar that comes in. I like how the pillar looks a bit like a tornado in your concept, having particles swirling up. Try experimenting with the “Velocity over Lifetime” module. There’s a settings in there for orbital movement that could make this happen.

When the beam mesh hits the ground (at 17-18 seconds in), your smoke particles are too transparent and come in to play too late. I think it’s because it’s spawning from within the beam. You can have them spawn further out by increasing the radius of the “Shape” module and changing the Radius Thickness to a value close to 0. This will make the smoke spawn closer to the edge of the radius. You can use a Hemisphere as a Shape for the particles shooting out when the beam impacts the ground too.

Overall I think the concept and the idea is really nice. If you get the effect looking like your concept then I think you’re well on your way of making a really cool dark magic effect! Keep at it and don’t forget to post your work in progress if you’re interested in getting more feedback.

Thank you so much for the feedback! I did have a question, so most of the systems you see in my effect at current are made in the VFX Graph (with the exception of the sphere an thin beam at the end), and was wondering if you know of a good way to make particles in VFX graph “orbit” around the beam like you see in my concept. I have tried digging around to see if anyone had a solution, but have so far come up short.

I haven’t used the VFX Graph myself yet so I’m afraid I can’t answer any questions about it. =/

Hope you will find a solution one way or another.

That’s alright, I found something that might work, fingers crossed! I should have a new iteration of the effect up sometime next week, and hope to continue to update this thread through the end of the project, since I can always use more feedback

Sorry for the late update! I got swamped with some other projects. At this point I am trying to focus a lot on creating shaders for the project. The timing is also still in need of tweaking, and I am still struggling to find a way to limit velocity over life in vfx graph. Any critique/ tips are greatly appreciated

It’s progressing! I really like when the dark ball forms and the lightning around it starts, that’s a nice effect!

The projectile feels a bit underwhelming, compared to both the build up and the final beam effect that spawns. You could use the same lightning element from the buildup to spawn them as a trail from the projectile along with some of the particles that you have flowing up from the ground in the beginning, which would not only add detail but also tie them together.

On the beam effect, try taking what you have now and shorten it to 1.5-2 seconds. There’s not much happening so unless you have plans on adding a lot of cool stuff during those 5 seconds I think shortening it is the best course of action. It’ll save you time and it will make the effect more interesting. And the contact area where the beam hits the ground really needs to have something happening. Some purple burning energy, lightning and dark smoke perhaps?