Hey all, I’ve decided to try entering the Riot Art Contest after seeing so many inspirational entries so far, I posted the WIPs so far on Polycount but I’d like to post them here too to get more critique, and maybe also inspire some others to enter the contest also!

For the contest I’m making a channeled laser attack that becomes more powerful over time. Here’s a few WIPs:

First WIP:
The first WIP started as more of an aura rather than an impact, it felt weak without any ‘oomf’. At this point in time, I was hoping for the effect to look rough, and intentionally unrefined with the sandy looking textures, but the first thing people pointed out when I sent this out for critique, was how the sandy materials looked terrible and were just too overkill.

Second WIP:
In the second WIP, I added a placeholder beam to show the point of impact that the impact originates from. I also modified the material a bit to be cleaner and less rough, though arguably not enough. I also have black highlights happening here in the effect. With those, I was hoping to bring the effect into an ‘evil’ side, but frankly with how I’m using really bright and energetic colours, the black just looked out of plack.

Third WIP:
In this WIP, I ended up further modifying the material, now I’m using an extremely smooth circular texture, which whilst looking a lot less chaotic, ends up looking far cleaner and more energetic. I also added an initial burst of particles at the start of the effect which I will be building up more in the future to act as thresholds for the beam.

Fourth WIP, split in two due to file size:
In these WIPs, I made quite a few changes. I’ve made the sizes of the circles more randomized but still keeping to the shape of the ball, I added sparks to the point of impact as well as a few extra layers overall.

And for an aerial shot, more akin to the League of Legends camera angle.
I personally like the way it looks from this angle, it looks as if the laser is actively burning the target and causing arcane flame to shoot out from behind the point of impact, perhaps as though the target were to be blocking it with a magical shield.

The next step here that I’d like to do is to bring this effect into stages. I want the laser attack to build up over a period of 6-8 seconds, with thresholds at 2,4,6 and 8 seconds perhaps. This way the laser would begin quite weak but grow more visually powerful over time. From this point I may add a ‘final’ explosion at the end of it all, but will have to see depending on how long the effect ends up being and whether any additional content to it at the end would make it just look badly overcluttered.

I’d be happy to hear any critique or thoughts anyone has so I can improve this or for moving forward!

Added the threshold points for the 1/4, 2/4, 3/4 sections. At the different thresholds, currently the only difference is that the number of particles spawned increases, but I want to try experimenting with starting the effect off having mostly blue with some red colours and the intensity of the colours increasing at the different thresholds. Hopefully that will make the build-up and final stage seem even more powerful.
I also want to try adding some smoke and maybe some refraction behind the sphere to give it more oomf.

Another progress WIP. This time I added colour changes to the different stages of the impact, to progressively show it getting stronger. 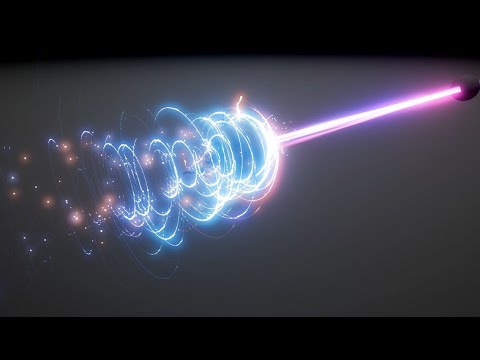 Made some more changes to the impact. Added some smoke, some sparks and a few other tweaks. I think it may be time to move on to start moving on the beam and caster! 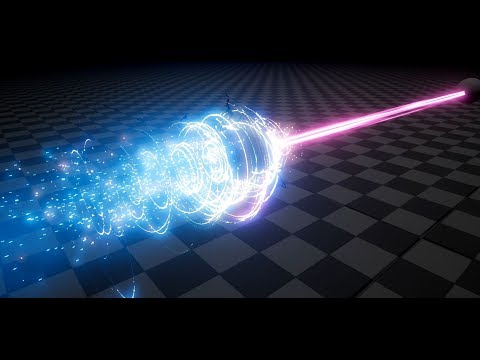 Another WIP of today’s fixes and issues. Added arcing ground smoke, changed the sparks as well as adding threshold points to them, also gave them an increased lifespan and bounce. Made a few other changes here and there too.

I wonder what people think about the increased brightness for the embers at the back. Is it too bright? Is the WIP 2 version of embers being a more dim colour more interesting/more powerful? 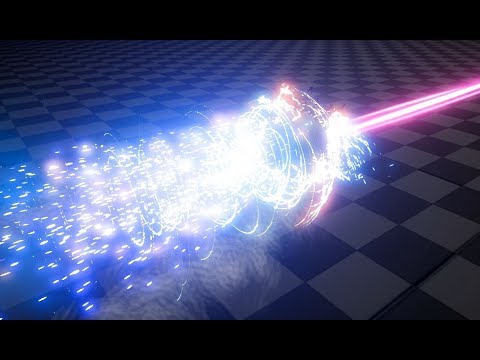 Calling it done on the impact for the time being unless I need to re-adjust the timing more to fit with the laser/cast. Beam at the moment is still early stages, will be looking to overhaul the material a bit as well as add more oomf to it… somehow

Still thinking I may need to tune down the overall brightness of the whole thing, I suppose in the further away zoom it’s not too bad, but close-up shots are kinda bright. 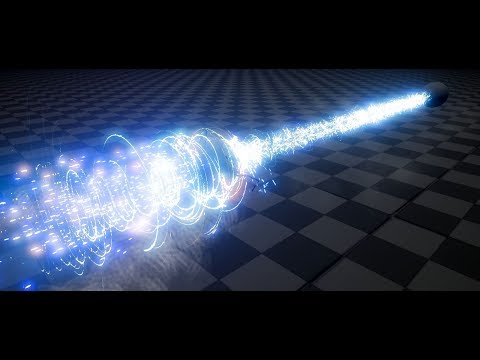 Another end-of-the-day update. Been making further progress on the Beam. Spent more than half of today fixing bugs with the engine itself, so tired… 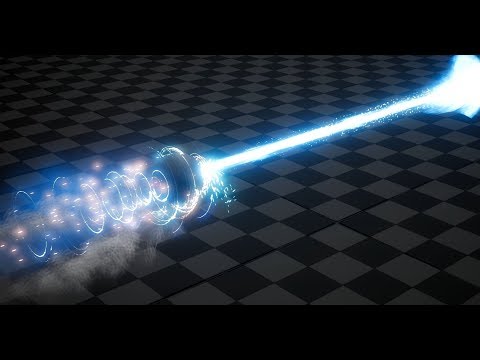 Making further additions and changes to the beam. Spent last few hours on getting the timing to look right. Hard to do this when Time Dilation at low speeds ends up breaking the particle

Will also look at reworking the right-side of the effect, maybe change the sticking out parts into something more like a dome or oval shape, like a kamehameha.

You have improved it quite a bit since I last saw it. Keep up the good work!

Another big update for the effect. I overhauled quite a few systems, colours and timings. With this I -really- hope it looks super powerful and impactful. Though I still don’t know what to do with the bit around the right side sphere. Maybe once I have an actual cast effect it’ll blend better or something 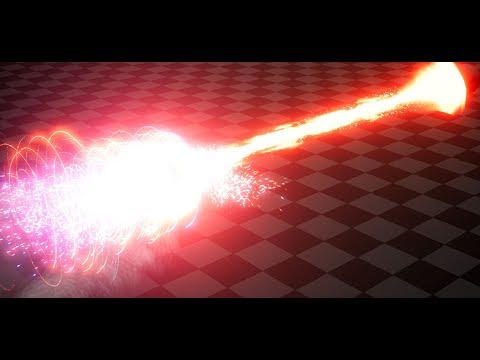 So… I’ve changed the beam at the beginning to be weaker and more transparent, which hopefully accentuates the power boost in stage 2 onwards a bit. I also added a lightning texture to fly across the beam and give it a bit more noise and shape as well as to give Stage 2 the explanation for why the impact starts spawning red circles.
Also toned down stage 4 impact to be less overwhelming, reduced particle count there by 1/4th which makes stage 4 a bit more visually clear whilst (I think?) still looking powerful.

Today’s progress: Changed the beam a bunch more, added some sparkly bits here and there to better accentuate the shift in colour and power. Hopefully now it feels a bit more powerful again. Also modified Stages 1 and 4 of the impact to have less particles being spawned. This is to better display the difference in power between stage 1 and 4, as well as because Stage 4 had too much going on and was visually overwhelming, hopefully at the moment it’s a bit better.

Also started working on the casting effect. Currently early wip but it sorta shows the idea I’m trying to aim for with a gradually increasing ‘portal’ of sorts from where the beam comes out from.
Need to fix that laser clipping in the portal area :’) 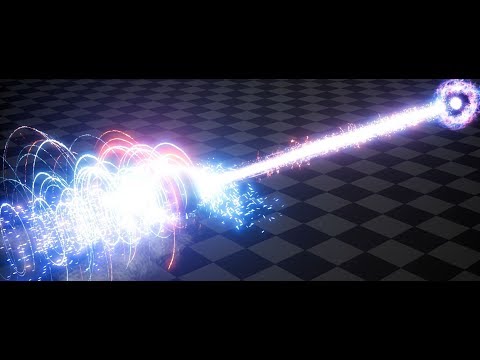 Bit more work, fiddled a bit more with some timings. Also changed the collapsing end a bit to have a more varied lifespan as well as a less uniform collapse. Removed the black ring in the casters ball, at least for the time being as it was clipping against the beam’s mesh during bursts.
Do you lot think it looks better with the black ring inside and I should try to make it work? My idea atm is that I’ll have energy sparks constantly gathering towards the center of the cast orb, it’ll get bigger and brighter with time and then at the 2, 4, 6 thresholds BAM > refraction > release burst of power on beam > caster orb becomes a bit smaller but bigger than at the beginning of stage 1. Rinse and repeat for each threshold, with the last thresholds’ caster orb being quite large and wild to represent the power of the beam more accuracetely. (maybe :P)

Also added a fire/burn type effect at the end of it all as I -think- that was required by the rules, but I’m not too happy with it at the moment. I’m thinking something more like a _/ cone shape ground burn decal behind the left sphere might look better at the end, with some smoke coming off the ground.

Quite a few changes here again, the right side is pretty heavily changed and modified, played a bit more with timings of the overall effect to fit in a few extra sections like the lightning per each threshold.

Reaching a point where I’m semi-happy with the effect and almost ready to call it done maybe after a few more tweaks. But if anyone has critique, please shoot it my way! 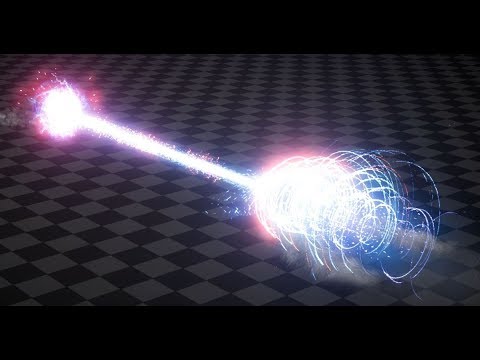 Visually it looks awesome, but I got a few issues when watching it at first - I didn’t get who was shooting who for some reason, after the initial burst, it looks like any one could be the one actually doing the shooting. The beam itself is really slow, I’d imagine a really fast laser, with a lot of force. Now it’s like gently massaging the other one

But the actual assets are really good, so I hope you manage to tweak it in time

Hey Anton,
I see what you mean, the impact does feel less impressive, especially in the early thresholds now with the cast being in.
I only have a little bit of time left on this though due to client work, but I will try and make the impact feel more powerful and see if I can figure out why the laser feels weak and slow and fix it in time.

Thanks for the critique!

Finally finished with the channeled laser. It’s been great fun stepping out of my comfort zone of fantasy explosions and doing a full effect like this. I learnt a great deal and am super glad that I ended up taking part in the competition. It’s been very inspiring seeing what other contestants are doing for their entries and the feedback we all were giving each other has helped us push our pieces even further.

Unfortunately I didn’t get to implement the changes for AntonDessov in time, in my opinion the laser still feels like it’s lacking real impact as the power of the impact no longer matches the power of the laser. But it’s something I’ll be keeping in mind when I work on my next effect and will do my best to make it better! 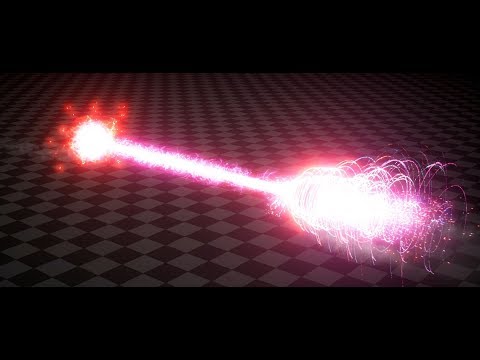