Hi I’m new here and a beginner on visual effects and as I said in the Title I would like to recreate in my way the spear attack VFX made in Genshin Impact as shown in this video :

I’ve already tried to make a texture that is similar to a spear attack (maybe this is not the best) and make a plane in 3ds to make it looks like it’s in 3d.

And for the moment I have this kind of effect :

wich is good but it seems like this is a little flat while in the video there is a motion on the effect that makes it more realistic, I think that maybe they are playing with the offset of the UV/Texture to make it feels like it moves, but I don’t know how to do it and if it’s the answer to my question because maybe it also a spritesheet that make it looks like it moves idk actually.

I would like to hear your thoughts on it to show if I’m wrong or if I am on the right track for the answer.

I suggest you try frame-by-framing through the video, and you’ll see a little more. Use , and . on the keyboard to step back/forward.

Here’s a screencap of the spear effect in the video: 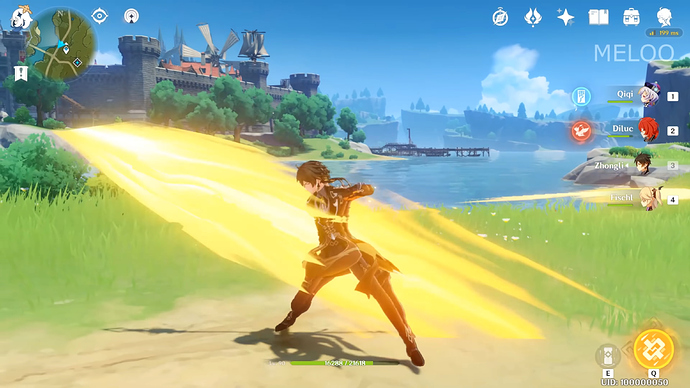 As you can see, it’s very exaggerated, but this size lasts only 2-3 frames or so to get that intense feeling. Then they change the shape a little. They are also layering the effect with mutliple particles. The key to a strong effect is often using more than 1 element to get what you are looking for.