started blocking out some rough sequence, i’ll see where it goes

inspired by this bow teleport ability thingy in shadow of mordor 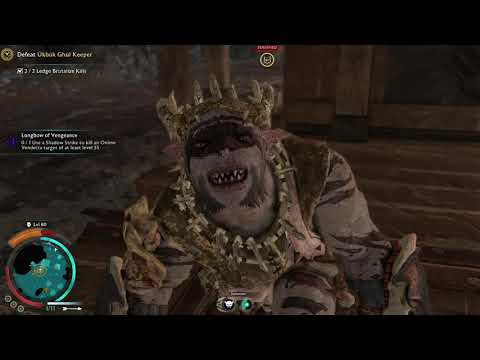 progress, i’ll make the ghost fade away with some smoke sim or something

WOW! this is incredible. Very fluid and dramatic I love this!

looks really cool and a very nice idea. love how the character is sucked into he arrow

alright, I think I’m going to call this one done, enjoy!

Nice work! The exit in particular has a really nice flow to it, the animation combined with the FX really reads as the character leaping out of a small portal.

This looks awesome! Could you do a breakdown on how you made the character turn into arrow and how the ghost is still there and fades down as a smoke?

Here’s a bit of a breakdown on that: 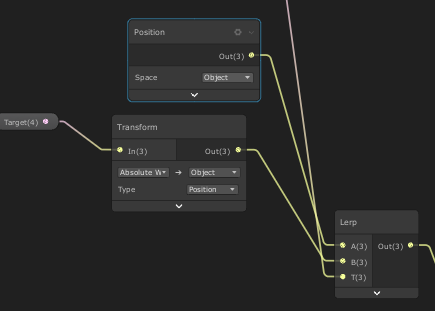 I send a Blend parameter in my lerp operation, to which I add a panning noise texture, which gives this back and forth motion on the vertices, to convey some sort of resistance to the attraction, and add some extra flavour to the motion.

I created a basic script which sets the value of this Vector3 parameter to the world position of the gameobject it’s attached on. (in this case, the tip of the arrow)

I then just animate my Blend parameter in my timeline, as well as spawn some trails moving in the same direction to get a better read on the motion.

I have 2 character Gameobjects, the default one, and the ghost. I simply fade in the ghost during the absorption of the default character, and make him vanish afterwards.

For the vanish, there are three elements contributing to the effect, the ghost shader, a smoke simulation, and a particle system.

The ghost shader has some vertex displacement, this time pointing downwards (with a panning noise texture again to avoid uniformity), which I slowly increase over time (as well as the opacity fade).

I used Embergen for the smoke sim, using the mesh as the emitter shape.

Finally a third layer with a VFX Graph particle system, I just baked a point cache of my character pose using the Point cache bake tool of unity (https://docs.unity3d.com/Packages/com.unity.visualeffectgraph@7.1/manual/PointCacheBakeTool.html), and sample my particles from that.

That’s pretty much it, the rest is mostly some camera and particle system work.
Hope that makes sense, hit me up if you have any other questions!

Amazing thanks for sharing !

Hello everyone!
I did some sound effects for patayas teleport arrow. I thought maybe it’s interesting to see how the effect might sound for others, too

Came out really nice! Even more satisfying to watch

Really nice work and Thanks for the sharing !