Hi, Im creating my entry for the challenge.

For me, nostalgia will always bring up this game, so im going to (try to) recreate the grenade effect from metal slug

Not sure about how I´m going to do it yet, but I had in mind creating a volumetric explosion for a while, so I´ll take the opportunity to do it with this one; probably with meshes and and displacement shader.

Really looking forward to this! I’d love to see it - when I think of vfx classics this one comes to mind for sure.

Well…this is way harder than I actually expected. After many failures trying to use some crazy shader or blend shapes techniques, I manage to create something that I can work on.
Thanks to a Steven Craeynest post Easy volumetric explosion in Unity3D | Steven Craeynest I got the path on how to do this kind of thing; however, tweaking the shader he creates there didnt get me the results I wanted so I created something based on that from scratch on amplify. 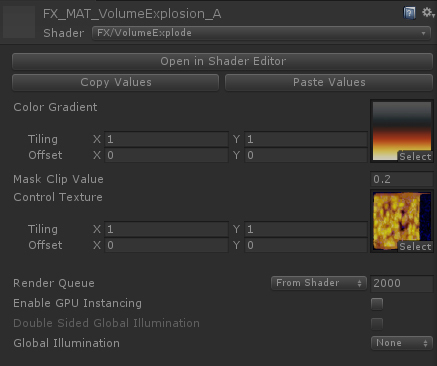 Im using a high division sphere mesh, and the shader, using a control texture, where the red chanel serves as displacement for vertex , green for clipping mask, and blue adss and extra layer to the clipping mask with that granular dissolve. The red channel its also used for color replacement, using a color gradient texture.
Then, to control everything, I use data from the vertex colors, so I can create the transitions from the particle system component; Alpha VC is used for displacement intensity and color replacement gradient offset, and blue VC controls the opacity mask.
I´m not entirely happy about how close to the reference this would allow me to get, but from now It´s the best I´ve achieved.
Next steps are tweaking the colors to get closer to reference and create the correct explosion behaviour, I also think I could use some emission on the shader so I would try adding it.

Well, I was not really happy with what I was getting as I didnt see much of a resemblance between my effect and the reference, and my objective from the beginning was creating a 3D rework of that effect.
So… I went to my original idea of using a mix of shader and blend shapes …and with this new shader technique I actually made it work.
It´s unpolished as it is still a draft, but I´m close to getting the result I wanted.

Well, this is my final result. tried so many things, in the end I took the most easy and simple setup, my first shader with just displacement and cutout. I didnt achieve the result I wanted , and run out of time for a proper polishing and extre effects, but I learnt so many things with this process that made it worth it, I would try harder next time.
Cheers!

If someone has any ideas on how it could be done I would appreciate any input as I ´m going to keep trying recreating this.
Thanks!