Last minute here, been thinking about this since I saw the sketch thread some weeks ago, but haven’t taken the time until tonight. I wanted to join in since low res pixel art on limited hardware is something I really enjoy making. Finding inspiration from a certain SNES game, this is where I’m at:

3x size
I cheated a bit and implemented the rocket and explosion into my last Ludum Dare game jam game, in Unity, since I tried to achieve a lowres pixel look during that jam, so I thought this would be a nice opportunity to test it further. I had scripted a bullet class that already moved in a direction and collided with obstacles. So I altered it a bit, added the graphics and an acceleration to the projectile:

However, notice they are snapping to the closest pixel, which I am forcing them to do in a script that probably scales horribly from a performance point of view. The simple smoke trail also sticks to pixels.
All objects are particle effects, even the rocket.
Here’s the sprite sheet: 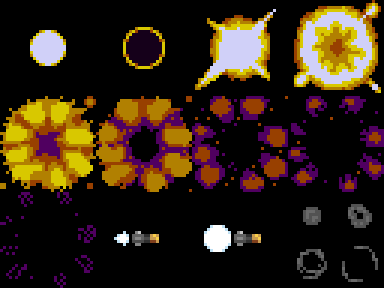 Would probably work well as a boss-death-explosion, too