Alright, it’s the end of the month… and here’s the sketch! 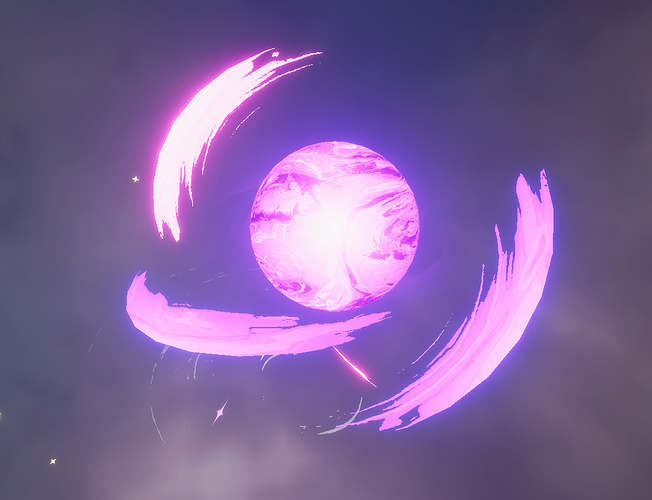 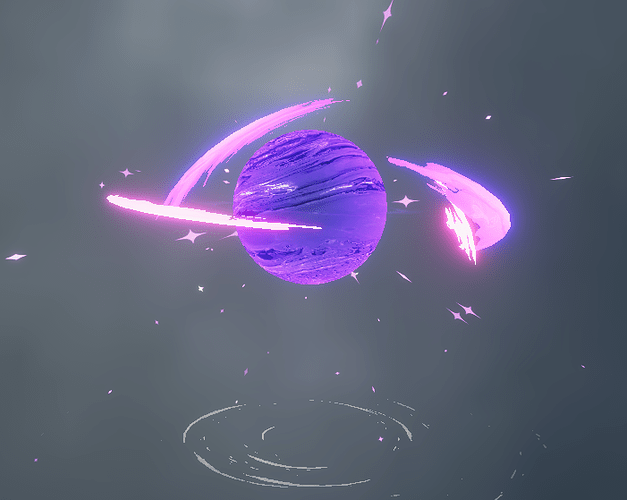 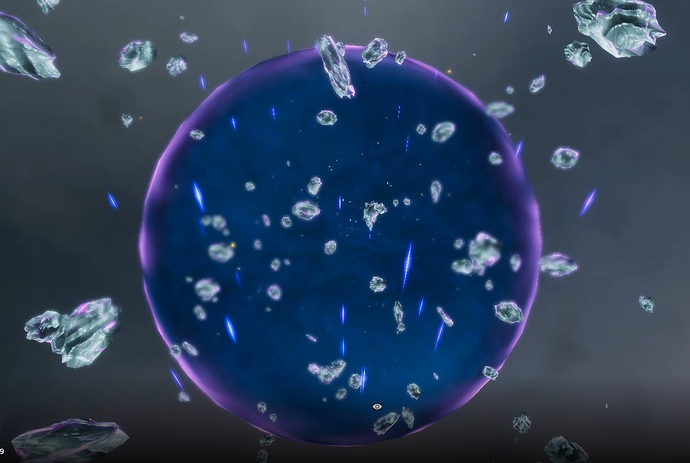 and some beauty shots

I deviated from my thumbnails but ended up having a blast!

It can only do 4, and there is a workaround to do more than 4. It involves having multiple mesh outputs and toggling them on/off with a random number generator and a comparison node, or something along those lines. Here is a method I found:

A different gradient circle where you can control it more.

–
This is my first time participating in a sketch challenge! I’m marking a spot for myself for now.

So, I made my sketch. I decided to go with this gravity AoE idea, loosely related to Zarya’s ultimate from overwatch. Not based on it though, but the ideas are similar. I wanted an effect that I can try to push the timing on (anticipation/climax/resolution), so this effect is all about the anticipation.

This is my first time making a complex effect without the help of a tutorial, so I’m definitely feeling scared! I’m going to look at my sketch here and make the meshes I need for the effect. I need a slashing mesh, a flat shockwave mesh, and a sphere. Then, I want to make a flipbook for the explosion texture. The others I can do with noise, I think.

I didn’t know Zarya’s ultimate, it looks really cool!
Keep posting as you go through the process of making it, it really helps beginners - me included hehehe.

Plus I wanna see what is gonna come out of it

Okay so I’m going a little slow, but I started out with trying to see how I wanted the orb liftoff to feel. I added a Fresnel effect for the glow, as well as increasing the size of the orb over time to show it collecting mass from around itself. Right before it blows up, it condenses/crumples in a way to show that its READY TO BLOW!!

Some problems I’m currently trying to problem solve are focused on scrolling a texture down a mesh. I’m having a hard time because the shader works, but when I use that same shader on a VFX graph in unity on a particle, it seems to not want to do time-based shader computations. I’m a little stumped but I think I am going to try to simplify my strategy and use quad particles for that effect.

update 1 My goals for today were to create a satisfying sucking particle effect and to introduce some slashes as well for a dynamic effect. I ran into a bunch of problems today.
Problems:

Okay so I’m going a little slow, but I started out with trying to see how I wanted the orb liftoff to feel. I added a Fresnel effect for the glow, as well as increasing the size of the orb over time to show it collecting mass from around itself. Right before it blows up, it condenses/crumples in a way to show that its READY TO BLOW!!

thanks for the awesome information.

Update 2!
I’ve been working on this on and off for the last couple of days, and I must say I’ve been learning a lot of helpful information. I have been saving snips of helpful shader shortcuts that I think would be very helpful for beginners, I will post the most useful ones to this thread when I’m done! Also, I’m including my shader nodes and such but please remember I’m very new to this, so take caution if you’re trying to copy me.

So, what did I change from the last iteration to this one?

Anyways, this is all for now, I hope to update soon with an even better effect! I hope to include a heat-distortion effect, update the slashes to come from a sphere mesh, and to work on the explosion.

Plus, it came to me that this might have interesting stuff to add on your effect: 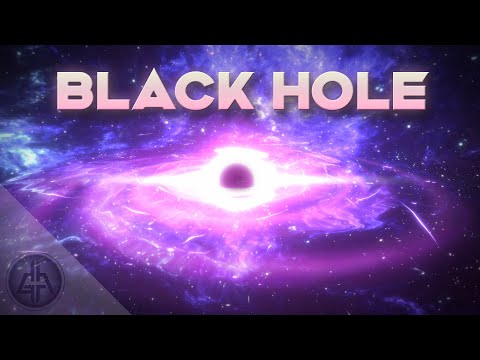 Did a lot of random stuff that didn’t work out today, so a lot of work lost. But, I learned a lot too, and overall I’m a lot happier with the artistic direction of the effect.
Biggest changes:

I am definitely losing steam/having creative challenges become harder and harder to overcome. Will report on morale with my next update

It’s hard to figure out how to animate attributes over the time of the vfx system, rather than the age of the particle. I’m still trying to figure that out, so if anyone knows how, please tell me!

options are limited. only the top ‘start X’ allows you to adjust how things will behave over the duration of a system such as start size, sped, rotation, particle life or color…

when you need a system to behave vastly different over time you usually need to split this into multiple systems, sub emitters and animator components,

I realized I can’t change the size of the sparks uniformly over time of the effect, so I just added a second sparks spawn that makes them bigger. This is a quick solution I want to try to fine-tune later.

i might be making assumptions but In shuriken you can do this. the duration of the system has ‘start size’ and it can be a graph

however we cannot animate the shape module circle inside the system it unfortunately requires keyframes with an animator component.

options are limited. only the top ‘start X’ allows you to adjust how things will behave over the duration of a system such as start size, sped, rotation, particle life or color…

Hmmm then we set it through a curve? I tried setting Start Speed using a curve but it didn’t change at all

You are coming to my rescue with this knowledge

I haven’t used shuriken yet, is it still used over VFX graph for certain effects?

I misunderstood, sorry; shuriken stuff is my experience - i can’t comment on VFXgraph directly - I do know that AFAIK it’s not ready for wide mobile adoption due to hardware; in that regard Shuriken is still used for URP devs

Okay, I’m super happy with this one. The shader I made was nuts, it’s definitely not the most ideal shader because it uses 2 parallax occlusion nodes, but it is worth it for the way it looks! Definitely dropping a link to Harry Alisavakis’ article I saw mentioned earlier on the site that heavily inspired me: https://halisavakis.com/write-up-magical-marbles/

Now I have to do the anticipation to the whole effect! And then polish for as long as I can muster

Have ever tried using Gyazo? I think it provides better quality image than what you’re using at the moment.

Regarding the dissipation, I would start by making the rocks quickly increase it’s size then quickly shrink down until it’s invisible.
As for the main sphere, I confess I’m also a bit dry at the moment >.<
Though I’ve been in love with what you can get by gradually deleting chunks of the object by setting different values for Alpha Clip over Lifetime aka Dissolve Effect (I think)

This is also from Halisavakis.com, here is the link on how he did this explosion and a tornado:
https://halisavakis.com/write-up-tornado-explosion/

This videos teaches how to achieve it: 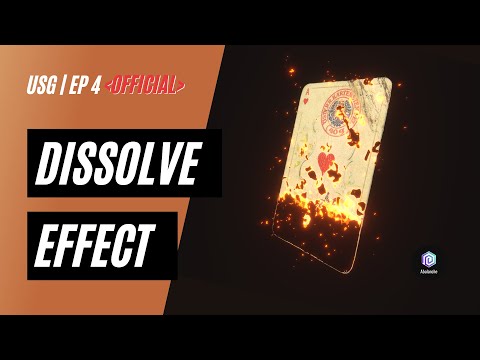 Kinda long but you will have the effect set in the 10 minute mark, more or less.

For sure! Thanks for bringing that up, I definitely am a little dry on ideas at the moment because I deviated from my thumbnails, but I love a nice dissipation. Maybe I can bookend similar themes with how I start the whole shebang and how I wrap it up. If you have any suggestions, let me know! Maybe I can do a distortion effect similar to the tutorial you posted earlier?

PS: I was about to edit my previous message adding a ‘PS’ recommending Gyazo, but got carried away and typed a whole new message, but didn’t realize I was editing my original message lol

Hello Noska!
a little feedback from my point of view, because for me two things are really missing.

All in all, your parts are looking better with every update. Looking forward to the see how it looks at the end of the month

Thank you for the Gyazo suggestion - I’ve been getting so annoyed with my current gif making method! Here is my effect looking swanky with its much higher res

Also, I love the dissolve content you’ve provided, it looks so cool - I definitely want to dedicate some time to creating a dissolve that looks like that. For my effect I thought the “dissolve” would be it getting slurped back into the wormhole. I feel like the effect makes the most sense as like, a “leaky spacetime” sort of thing so I thought it coming back from whence it came made more sense than it dissolving. I hope that comes across in my effect here, but let me know if you have any thoughts!

I’ve been really appreciating everyone’s feedback, tips, and other helpful info. It’s been making this process a lot easier on me. <3

edit: gyazo peed its pants when I asked it to make a gif, so I’m not sure what the deal is, but I will say it has a nice capture and the video is good. If anyone has any advice as to why the gifs have a low framerate, let me know!

Okay, we are nearing the finish line soon! I am worried about being able to polish my stuff enough. Here’s an update gif and also a link to a video because I don’t trust gifs anymore.

Okay update, this is my most recent progress:
Added a camera shake to explosion
Tweaked textures on slashes
Tweaked Smoke
Multiple mesh output for rocks

I’m actually not sure if I like this more than my previous one, if anyone has any final tweaks to suggest, I’m all ears! Something I kinda just gave up on was the orb lifting up off the ground, because it was too complicated with the timing of everything to add that to the original orb particle. And I’m not sure how to do it with a separate VFX graph. Suggestions welcome!

Hmmm what about using Fresnel to feather the edges of the sphere?