Need some help with strange lines

Hiya, pretty new to VFX. I’m experiencing some strange lines up the sides of the cylinder mesh. Do i need to have more sides on the cylinder?

This is an artifact of mip mapping.

GPUs calculate the mip level based on how much the texture UV changes from one screen pixel to the ones directly next to it. If the distance max change in UV in any direction is less than the width of a texel, it uses the largest mip (aka, the original texture). If it’s more than a texel width distance it calculates the appropriate mip level such that the mip map’s resolution will be roughly 1 texel between screen pixels.

When surfaces approach being parallel to the view direction, the change between one pixel and the next can reach over the entire UV. This it true even on triangles that only show a small part of the overall texture, because the GPU is extrapolating the UV for the “next pixel” even if the triangle isn’t visible in more than one. So the mip level starts going to infinity and the mip drops to the smallest 1x1 mipmap regardless of the texture size.

There are a few fixes to this.

Thank you so(!) much for the detailed answer! Really helped me understand the issue

I will try and start with solution 3, as i already thought about that

Again thank you so much.

@bgolus has a great answer. There is one more possible fix. In the texture’s advanced import settings there is also an option to “Border Mip Maps” that copies the border pixels into the borders of each mip level. It isn’t clear to me which pixel(s) gets copied, though.

@bgolus really good response. thanks for contributing to our education!

Whether or not Border Mip Maps fixes this depends on the content of the image. If the texture you’re using has color all the way to the edges, as it should for a horizontally repeating texture like this example, the 1x1 will end up very similar to the mip map w/o the Border Mip Maps enabled. So in this case it will not fix the problem.

For example, here’s a similar noisy glow texture like what’s being used above, and the 1x1 mip map with and without the Border Mip Maps enabled. 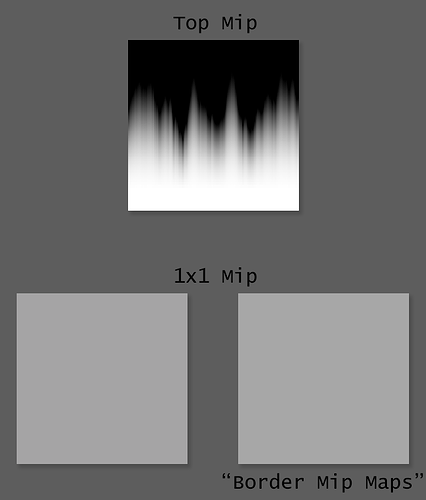 image640×750 22.3 KB
They look almost identical, and in this case the one with it enabled is slightly brighter!

But if you add a 1 pixel border around the entire image it will make the 1x1 mip disappear. 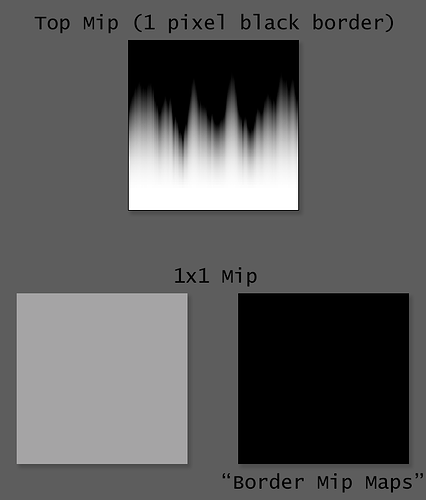 image640×750 24.9 KB
But this just adds a new issue, which is there’s an obvious black seam when the texture repeats, and it’s a line that “grows” with the mip map as it’s always 2 texels wide.

That’s why I didn’t mention it as a fix for this case. It works for more punctual fx textures, but not for any texture that needs to wrap.