I want to recreate the shader from Diablo 3 in Shaderforge

Hey guys, this video is old but i’ve always kept it really close. I’m sure most of you have seen this video before, the very specific part i’m looking for help on is at 27:40

First off, I’m not great with shaders, but I really want to learn them. I created this so far, and it works! But the only part i’m having problems with is that Julian states that each particle has a random UV offset and scrolling speed. I’m not sure how to get the shader to choose a random offset for each spawned particle. I’ll spawn like 5 particles (random size, speed, life) but they all have the same parts of the texture scrolling at the exact same time. 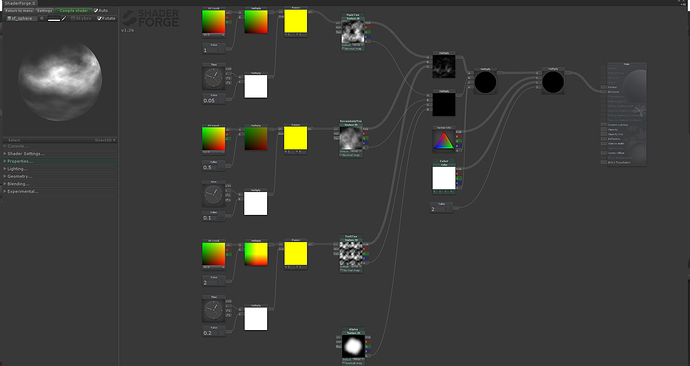 If anyone could help out, that’d be soooooo great

hey so what you might want to do is instead of running it into a panner node you can expose your u and v speed like here: http://acegikmo.com/shaderforge/wiki/index.php?title=UV_Rotation_%26_Panning (where it says “Custom(Manually created) Panner w/ properties to control UV speed”)

not sure its the best way but thats how i do it!

If you are using 5.4 you have to sacrifice!

Use a color channel or the alpha channel if you aren’t using it.
Set shuriken to have a random initial color.
Use the vertex color channel of your choice, to add to the offset. Bam. Random offset for all particles.

hmm, let me know if i’m wrong, but if i append 2 values and multiply it with time, won’t it just use 1 of the 2 values instead of a random numbers in between 2 values?

Wait, what am i sacrificing!

That’s only for random colors though right? I’m trying to get a random offset of the UVs so that each particle looks different (texture wise).

Here’s 2 particles from 1 emitter, but their textures are panning at the exact same speed so they’ll always be identical.

It’s multiplying each value against time but exposing it so you can control it in the unity inspector where you will have separate control of both your u and v speed. In your scene tab under effects you can turn on animated materials to see it update in editor too. This won’t have a random effect per particle though. I may have misunderstood what you were going for initially. This is how I had it set up prior to the current version of unity.

ohh yeah haha it won’t be random per particle, BUT i actually didn’t know about that animated materials in editor. Thank you

, it’ll make it much easier to work haha

Hmm, I think the diablo material multiplys two noises together. Multiplys them by two then multiplys in the next texture. They then multiply that end result by two. Then plug your particle colour and vertex colour in after that. Otherwise they are also getting multiplied by two. Resulting in you having to half whatever number you type into the colour channel.

oh actually , i misunderstood what you were saying, but i think i got it now

omg, i think it’s working. i didn’t think about using the random color values as part of this! genius.

Glad you got it working dude : D

Can you share an image of the completed shader?

I don’t think you necessarily need to sacrifice vertex colors.
If you set a very low second color for the random color, but multiply the vertex color channel you use for the offset by a very large number, then you get a big enough offset per-particle and keep the colors you want.

The only tedious part would be doing that for a gradient (make sure that each color of the gradient is slightly different than the original).
Or am I missing something?

Sure that would work. But most of the time, sacrificing a channel is enough and a lot simpler. It also doesn’t require that you author your textures differently.

I see! I generally use monochrome textures and control particle colors exclusively through the Particle System so that’s why I mentioned that

Can you post an image of the complete shader? I am trying to recreate it as well and I am very new to shaders

Yeah sure here you go. Keep in mind i’m pretty new to shaders also so it may be pretty sloppy in terms of efficiency? =x 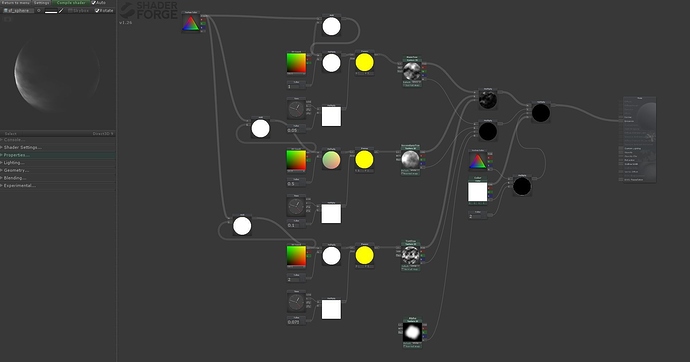 @Faybao Hey, did you ever find out how to randomly off-set UV’s in ShaderForge (while panning)? That’s something I’m trying to figure out.

For example, I can’t plug my multiply node into the UV Panner slot. It only accepts UV Coordinates. It looks like distance is only controlling the panning speed, but what’s controlling the offset?