Hello guys, this is my sketchbook. Critiques are always welcome, I’m looking forward to learn from you guys.
I will keep each effect on a seperated post.

The trail curve made of simple math formular and a perlin noise texture.
The impact is a quad, taking this texture for alpha erosion 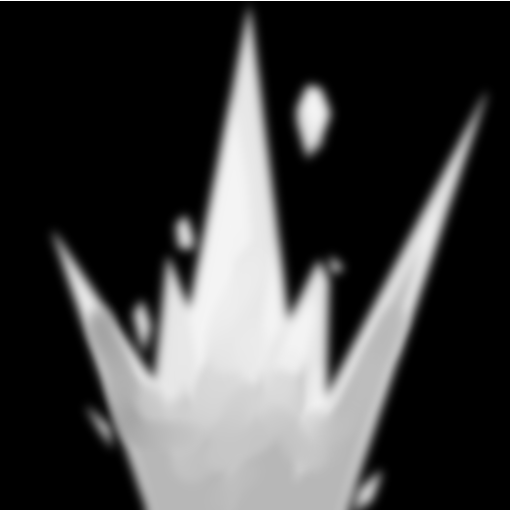 This is my attempt on recreate an effect in dota 2, Ember Spirit’s flame guard
How the original looks like

My progress so far

Some of my problems:

As for the fire, I draw a blurred circle shape using UV input. Then panning 2 perlin noise for animation.
Different UV shaping function result in different style of fire. I made 3 styles here, the blue “core”, the red flowy fire, and the black smoke.

The ember flying around in a circular motion. It could be done using a flow field in UE4 I guess, but I’m trying to find an alternative.

You could try using the Orbit module in Cascade!

About the fire under his feet, ask yourself why the results are different. Is it because of the colors? Maybe a different blending mode? I think having a deep dark blue background color as you do might affect the overall look of it! Try using a neutral 50% gray for the background.

Hi, I did use the orbit module, what setting should I do to achieve the motion in the game?

I would recommend you to stretch the sprites a bit more so they resemble embers, spawn them in a circle and make them go up by giving them a constant acceleration between 4800 and 9600 in positive Z, so they form that hemisphere shape.

Make some of them brighter than the others and you should end up with something pretty similar to your reference!

I tried tinkering the orbit module for a while, this is the best I can came up with.
I think orbit is not possible to create that kind of motion.

Then, still stick to @Lush 's solution. I create a line attractor across z axis, and this is the result.

Applied into the glowing ball, I’m pretty satisfied with this

A sword thrust, very simple technically. I started with a complex texture for the “blew out debris”, hoped it to feel more random. I even had a fancy deformation for the main thrust ray, but eventually discarded all that.

Just a question: Have you made the character animation ? If not, is there a database of animated character somewhere ?

No I didnt, Mixamo is a good start if you looking for free animation. And Epic gave away a lot of Paragon assets in case you didnt know.

You can change the offset of the orbit module over the life of the particle if you check the “on update” box.

A simple claw attack, sphere-like mesh + texture erosion. I wanted a blood splash but haven’t found a good implementation yet.

Thanks for commenting. “on update” option won’t help here I think. I get your idea that we increase the offset over time so the embers looks like they are expanding. Well, they expand in their local space and thus moving uniformly in this motion

But what I want is that, embers moving around a fixed point (world space).

Then the initial location should be zero, rather than a cylinder. And give the “Rotation” section a uniform distribution.

Thanks Mike, it’s works! Silly me.