How to create Point Clouds Morphing with Unreal Engine 4

I have wrote an article with detailed explanation of my Point Clouds Morphing FX for Unreal Engine 4.

Hope you like it, sorry for my not ideal english knowledge )

What is the Point Clouds Morphing?

It’s smooth transformation FX between two 3d models represented as particles in a 3 dimensional space. I have made PCM effect about two years ago: 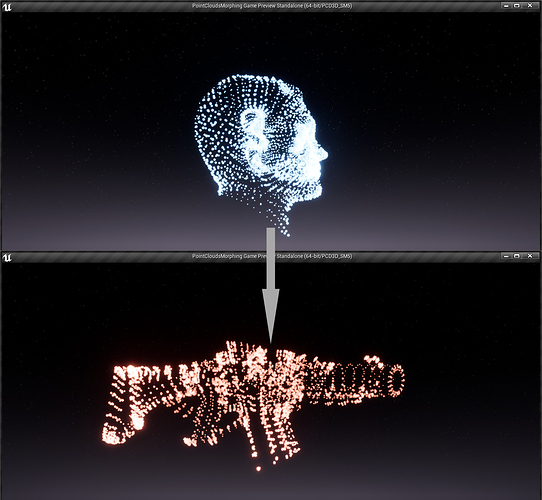 Before starting work on VFX i have define technical requirements for final VFX version:

So, we have two 3d models and we want to deal with transformation from first model to second.
As we know, 3d model contains information about vertices. Based on the vertex information, GPU knows how and where to draw triangles.

But we need only vertex world coordinates that describe X, Y and Z float values: 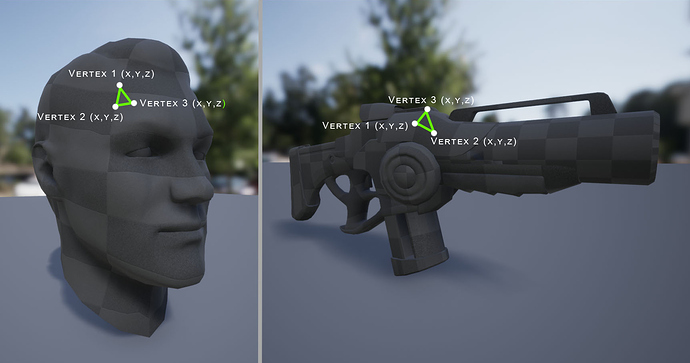 Obviously that providing calculation for the vertices on CPU is not really an effective way, so we will do a job on GPU.

After some research and brainstorming time - the easy and clear way to store data and pass to GPU render - bake vertices coordinates in to the texture. As result we have Point Cloud texture with packed data in a special manner.

Next question is: how to bake vertices coordinates in to the texture only using UE4 BluePrints?

I have used RenderTarget and drawing directly into canvas. In fact we draw in an texture: 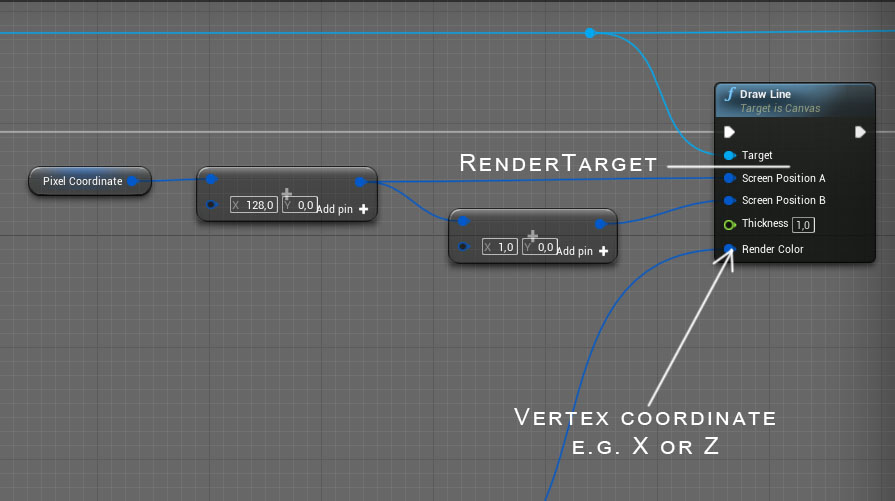 We get all vertices from a 3d model (that is possible only with Enable CPU access flag in UE4) and pack values into the texture. As result:

As we know vertices are stored in float format. One float is equal to 4 bytes or 32 bits.
Accordingly for storing info about 3 components (XYZ) for one vertex we need 12 bytes.
That’s too much and will require bigger texture size for storing data.

And now for storing one vertex data (X, Y or Z coordinate) we need only 16 bits of 2 bytes or bytes per one vertex.

16 bit is used as a sign + or -, other 15 bits are used for setup a natural value
For packing all three components of vertex coordinate need 6 bytes instead 12.

Of course is possible to pack real float value in to the data, but VFX is locally used and unlikely
need to store real and precision float values.

Also must keep in mind about GPU depacker complexity and shader instruction count for decoding Cloud Texture for assembling in to the value.

16 bit value consists of two bytes - Hi Byte and Low Byte of rounded integer value.
For example if coordinate value = 345,783 then algorithm round value to 346
We don’t not need a fractional part because it is not polygons, just setting up for a particle center coordinates closer to original vertices coordinates form 3d model.

Then our two bytes converted into linear color for the pixel.

Third component of linear color is used as a visibility flag:

In the video above we draw pixel color to RenderTarget texture:

Point Clouds Morphing always provides a rendering defined count of particles. But different models contain different vertices count. If the amount of model vertices is less than defined particles count then i have marks nonexistent particles as invisible. 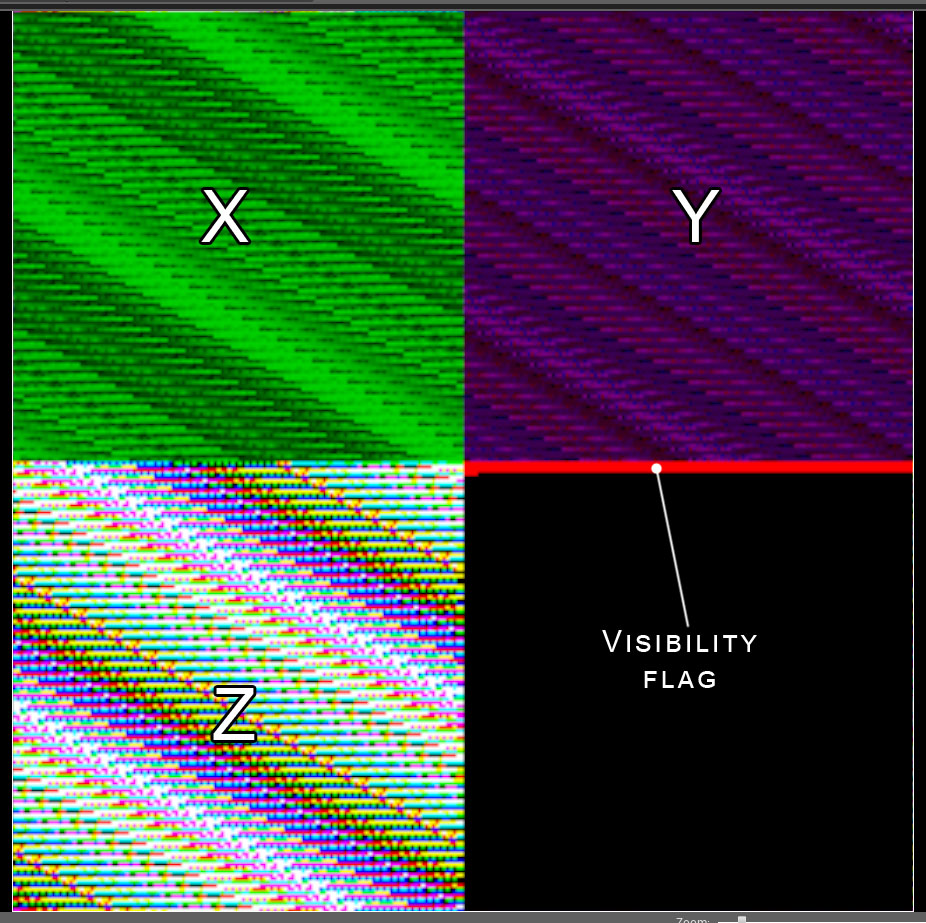 All geometric and pixel calculations happen inside of material. Material has parameters:

As result: the material includes 216 instructions and using 5 texture samplers: 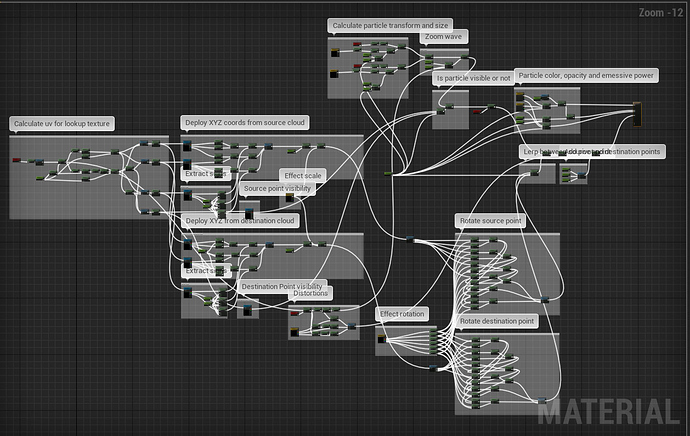 What we do inside:

Because particle coordinates are duplicated, we have visual effect that particles are spawned at the existing locations.

And in other cases if target Cloud has a lower amount of particles then we have visual fidelity that particles fly to exist point.

Some hack I have made for detecting particle index in the Point Cloud texture.

Offset difference (World Position of component) is used as Cloud texture index. The particle is a simple quad mesh of two triangles and always facing the camera view.

Result of geometric calculation is connected to the WPO input of UE4 material domain.

Point Cloud texture is 256x256 RGB, not require much space.

FX has been tested on the PC (SM5), PS4 and Nintendo Switch.

Thanks for the detailed breakdown! Super cool! <3