This is my first time posting and doing concept for VFX stuff and i would love some feedback on how i could improve for next time! (i don’t know how to use this website

this is a healing spell i had in mind, i apologise if its hard to understand.

First frame:
God rays come down slightly above the player

Second frame:
Then a pentagram scales while spinning getting slower as it scales, from players position also the god ray fades at this point. grass and flowers slowly blooms out as the pentagram reach’s it scale point. also a green aura fades in and up from the player.

third frame:
this is where the aura jumps down back into the player and jumps back out as healing crossing and kind of just floats out a bit. and the pentagram also scales out again and then fading away, kind of goes for the flowers and grass they react to this like strong wind.

fourth frame:
I forgot to draw it but butterfly’s come out from the scaled pentagram and fly’s away, and the cross also fades. 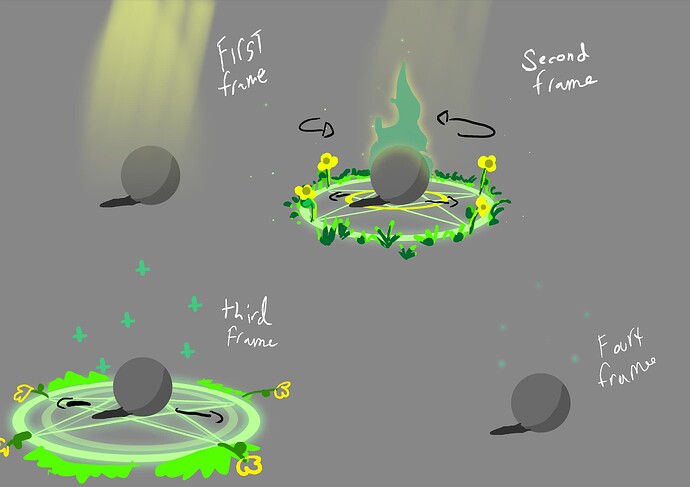 Hello Ryukai!
welcome to the community

as you explicitly asked for feedback, here it comes.
First off:
The pentagram has very specific meaning in different cultures (mostly negative, which doesn’t fit to the positive healing effect). I suggest to refrain from using it, unless it is absolutely fitting the context. Just go with a ornamental summoning circle that fits better.

There is a lot going on here.

I suggest, creating another step, to make the order of execution clearer.

Of course, this is all subjective.
I think the effect is too loaded with different themes: holy/godly, nature/flowers, demon (pentagram), flame (aura), wind.
Mixing themes in itself isn’t bad, but I would say, pick two and have them established to work together.

It would also be great if you provide a rough timeframe in which this all should happen. (in about 2 seconds? ~10 seconds? ~30 seconds?) With that, it is easier to fathom the overall speed of each motion.

Overall this already looks better than the first few concepts I have made. Putting your work out there and asking for feedback is a great way to get better, even if the things aren’t “good enough”. So keep at it and I am looking forward to see the next concepts

I hope my pointers help!

Thank you for the feedback! I realised soon after that I put a lot of different components to it, this really helps and I’ll be making another concept for it with less!

Here’s my second attempt! please tell me if this looks better or if I’m still using to many elements!
(Im not to sure if i wanna stick with the god rays)