Hello everyone. This is my first post on here and I am seeking Critique on my Spike Attack. As of now I need guidance as to making the timing for the spikes and the emissive ground cracks flow in and out better, for the effect. Also any other tips on how I can push it further and really make it good. I’m making this in UE4 and I’m still fairly new to using the Cascade system, so any advice as to use the system would be helpful as. I will provide any information that is needed for a critique. Thank you!

Hey I’m relatively new myself but maybe I can give you some feedback regardless.
First of all I love your spike meshes and ground textures. It really looks like cracking ground!
I think pushing the timing a lot, like you already mentioned, is a good starting point. I would do everything much faster, can you see how the effect in the example is completed in 1-2 sec and yours is taking 5?
I think having the effects follow each other quickly would make the effect look more fluid. For example start with your ground effect and add the larger cracks together with the small spikes and let the big one follow shortly after.
Right now it is also not clear what the effect is meant to communicate to the player. For example when you using it in a Game the player doesn’t know if this effect is an ongoing aoe effect or a single damage spike.
To give you some further ideas: you could let the ground flash up right before the big spike is spawning or you could add some particles that fly in the air when the spikes are breaking through, like debris is kicked up.
I think you are on a good way tho, just a few tweaks and it will look super cool. Keep up the good work!

@Hank95 Thanks for the critique. I making this as an AOE attack.

see how the effect in the example is completed in 1-2 sec and yours is taking 5?
I think having the effects follow each other quickly would make the effect look more fluid. For example start with your ground effect and add the larger cracks together with the small spikes and let the big one follow shortly after.

This is a good point, it does take too long to complete.

let the ground flash up right before the big spike is spawning or you could add some particles that fly in the air when the spikes are breaking through, like debris is kicked up.

And I’ll try to apply this as well. Thanks again for the critique.

I hope my feedback is useful. I found an article that explains really nicely what your train of thoughts should be when you creating an effect.

Stefan Jevremović did an overview of the way you can approach beautiful stylized visual effects. Learn how you can do stuff similar to League of Legends.

I’ve done a similar effect to this some time ago and I know what you are going thought.

My main problem was Overdraw because I was trying to use particle effects for everything.
I would suggest to use mashes with the blend-shape rather than particle systems for spikes. That way you would be able to tell exactly where you want spike to show and how. Also It would be one drawcall since they will all be the same mesh. You can do the same thing for the “Spikes glow” with the offset in animation of them going out first (and making them double quad so they are visible from any direction).
Style:
I have a bit of trouble figuring out style of the effect: Some elements feel and look stylized and others are a bit more realistic. I would first define the style before going into the animation.
Textures on the ground do not connect well to the rest of the effect.
Animation:
Some of the elements appear in the same time and I would offset them a bit. I guess before Spikes going out you would first see the groundcracks, then ground breaking and piling where the spikes are going to get out, and then you see Spike Glow from the ground and then Spikes. Also I would do it a bit more like a wave from the center of the effect towards the edges (this transition could be couple of frames so but it would still add to the feel).
Spikes they feel a bit more stylized than the look of the effect (i think this is because u are using Scale UP → Scale Down for the Climax and Dissipation) - If you are going towards realistic approach than you should make this part more “Snappy”. Also I wouldnt scale them but move them from/to the ground.

What I would suggest is making all the elements first like a 3D concept art and then animate each element how you think effect should happen. Like I did for this effect 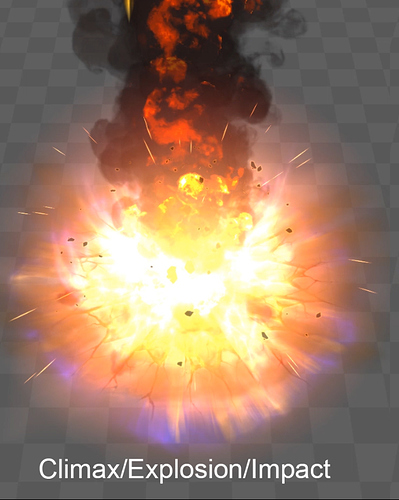 Hope this helps, keep up the good work!