Alrighty folks, looks like I need to step it up some more. I plan on doing a handful (6 or 7) for the entire reel. I’m gonna push it as hard as I can. I’ve seen some cool FX elements in WoW I could use as inspiration for other ideas.

I’ve added an environment, orbiting camera and idling model. I plan on having the camera orbit different directions (L>R, R>L) to add some variation. I can probably add the Reaper this time around.

I made an infest spell inspired by the swarms of Warcraft’s Silithus. I’m considering adding little buggers orbiting, but it seems like it might be additional noise.

Textures, animation, and (basic) environment need work. Should the stones be bigger or smaller?

I tried to keep the “magical parts” of the dummy as simple as possible. Nothing noisy that will compete with the FX. I figured swirly orbs would do the trick.

I’m using Camtasia right now, and Fraps doesn’t work well. Does anyone know of a good recording software that has a high FPS?

You could give OBS Studio a shot. Much smaller file sizes than fraps, although fraps may have a better quality image because of this. I usually use that when fraps is proving troublesome. Plus it is free!

I second @Sam: OBS is my go-to recording software at work, though I find it isn’t always easy to correctly set it up.

If you have an Nvidia, you can use ShadowPlay, which comes with GeForce Experience. This is what I use the most for my personal projects.

As for the FX, good choice to keep it simple to fit the rest of the design, but I’d like to see the bugs a bit more. At least the swarm part. Maybe just make it a bit bigger? Also, when I hear “infest”, I always think of some brownish smoke or goo, as if it really was infested and as if it’d smell from miles around. Maybe you could try adding just a bit of smoke around the model?

Sure, I’ll make the swarm bigger. Yea, I was thinking bug infestation. I saw that they used a yellow/brown > purple pallete like the Zerg from Starcraft. I could make that cloud bigger as well. Smoke sounds cool too, I’ll add that.

Does anyone know how to create chain lightning? My solution is to create a plane w/ vertex offset creating a wobbly chord (like the swarm mesh). Problem is, it’d be paper thin and won’t face the camera like a Billboard would. I’d prefer a simple script that I can just plug my shader into.

The idea behind this one (setting up multiple ones at once) is that it’s a static orb that comes flying in, slows down suddenly, then detonates- creating chain lightning. If I could get the chain lightning out of the way the rest is fairly simple. I chose one color to denote the primary target. Gotta add that shower of sparks! haha 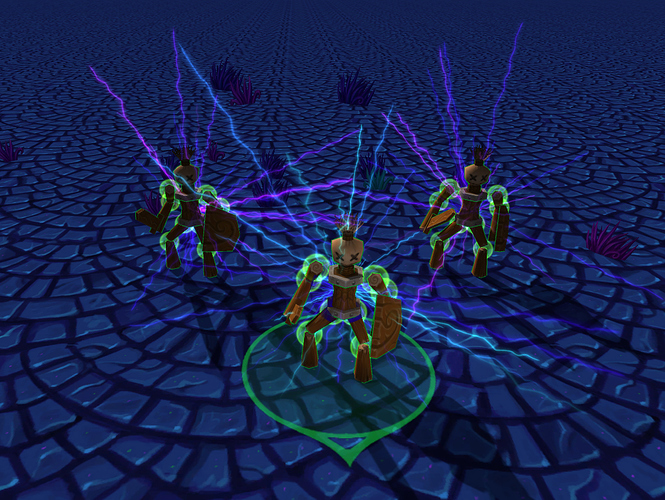 I also recommend OBS. You can turn off the compression completely for best quality but the file size gets ridiculous.

Well, I tried using OBS and it’s slower than Camtasia. I have a hard time opening the files it creates (buffers/ screen goes black).

Unity’s game window lags a little, but appears to lag more when recorded. It’s pretty irritating and it might just be my computer. I’ve got 16GB of RAM w/ 3.3 GHz CPU.

Laying in another effect (WIP) (3/6). Gotta get the fins looking right then I’ll be able to animate some fishies. It’s supposed to be a bubble shield that has some minor healing. Lol, it’d be neat to have a little crab on top snapping at people, but it’s not necessary. I feel things are where they need to be.

I notice that the refraction creates this strange shadow/tracing when it refracts. The stranger part is that it doesn’t happen outside of game mode. It’s some kind of rendering issue.

I still need to find a script for lightning that will either work with ShaderForge or with animated flipbook textures. Can anyone reccomend such a script? Thanks.

I still need to find a script for lightning that will either work with ShaderForge or with animated flipbook textures. Can anyone reccomend such a script? Thanks.

Unity 5.5 has a light component in the particle system. Just attach the light and make sure ratio is 1.

I would have made the bubble behave all juicy and subtle moving if possible. Make sure those fishes are spawned inside the bubble aswell! Make sure to make the bubble have a great entrance and a good exit, that will really sell the effect.

Ah, yea I haven’t updated yet. I’m afraid it may mess up some things based on the comments I’ve read so far. It looks like it still needs more work. If anyone’s using Unity (Version 5.5) without any issues in Shuriken/Shader Forge that’d be nice to hear. If there are any performance enhancements as well that’d be great (laggy game editor atm).

Are you recommending some vertex offset? That’d add a little wobble to the bubble haha. I wanted the fish to be “magical” and be inside/outside the bubble. I’ll make it inside only. Yep, I’ll come up with something cool for the start/end! I’ll add a “pop” dissolve effect at the end with some puddles of water on the ground.

Yeah, I am currently making the shaders in 5.4 and importing them into 5.5. I feel like its worth it atm

I currently haven’t used that much custom shaders.

I guess you could do a vertex offset shader, you can just animate its scale on the sphere or have it rigged and animate it, up to you!

But the fishes do get less visible if you put them inside the bubble. This is a tricky decision!