Hey there, dear RTVFX Community. After finishing several courses and I would like to start composing my demo reel. I would really appreciate If you shared your thoughts on this little fireball I did the other day.

Hope to get your feedback soon!

Hey, nice effect, i recently also created a fireball for my portfolio. i posted it on here, so check it out if you want

and id also appreciate feedback. Your fire looks good, I think the shape of it looks better than mine. Im not sure if its the gifs compression, but your embers are barely visable, I would probably make them larger and brighter, embers should be as bright as your fire at the start. With my embers, i also had them flicker in brightness using a curve. I think if you added an impact effect it would make a great piece for your portfolio

Hello, nice effect! Love the transition of the sprite from fire to smoke.

Embers could be more emphasized more too, maybe you can see it better closer, but maybe your mipmap is making the texture disappear when you get too far.

Also it would be pretty if you added hit effect as well? Maybe this is still WIP so Im sorry if thats the case.

Thank you for your amazing feedback. I was really happy to receive it today in the morning. As soon as I received it I already made some adjustments to the feel and look of the effect. It is still WIP so there’s no impact yet. But I will definitely add it as well as build-up. Here’s the result:

P.S. I will drop you a message on your effect as well!

Hey there! Thank you for a nice feedback. Your advice was a lot of help when I revised the effect today. I adjusted the smoke as you suggested and as well embers. It is still WIP therefore I am going to add casting and impact as well.

I appreciate your help.

You are getting there!

If it is for a game then you want the tip to be at focus and strongest contrast
So it is easy to see where the impact point is. 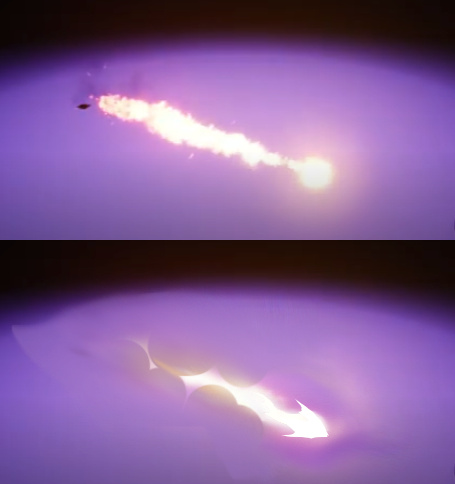 I hope it helps!

Oskar, your feedback is extremely valuable because I would completely forgot to assign values to color and shape of the effect without you. I was targeting more “realistic” type of fireball so I aligned some values overall. Would like to hear back from you!

Good start, but needs some polish. Think about this: someone viewing the effect shouldn’t know it’s constructed with particles. You want it to feel like a continuous stream of gases, not a sequence of sprites. It’s tricky, but possible!

Some suggestions: Your fireballs are popping on with very distinct edges. Maybe try fading them in, or ramping up the size? The opacity of your sprite should fall off on the edges. You build up visibility by layering particles.

Similarly, when the particles fade out, they are very clearly particles. Try ramping up the size and ramping down the opacity very quickly. That can hide the outlines of the particles.

Hey nice speedy updated! its looking nice. Valuable feedback from @FRGFX there. To add on to this, I would say, I think we are seeing the sprites because its slowed down, I would be interested seeing the new update at full speed. Also, the fire is spawning BEHIND the head here, In reality, the fire would come from the front of the head, the bright glow would be surrounded by fire particles. I hope that makes sense. The embers are looking much better!

Hey there! It would be really nice to know your name

I’ve been iterating the effect for the last two days and here what I came up with. Your help was incredibly significant into making it look A LOT nicer. I am really hoping to get your feedback on this one.

Ashley, I’ve made several iterations on the effect lately, I am attaching two versions of the effect this time around. Have a look:

P.S. Thank you a lot with your help over the course of my work with this effect.

Haha I signed up from my work account, so… ooops!

Yeah, it’s coming along! Nice! The particles don’t have as much of a gap now.

Maybe try increasing the emission rate a little to make the edges even smoother. Also, maybe give the particles a little forward velocity? Or maybe backward velocity? Might have a nice effect.

Since this is for your demo reel, I would personally go expensive on the particles.

If it were an in-game effect and you had a particular budget then I think this would probably be ok.

So here’s my critique for what it’s worth.

The first thing I do when I start to do an effect that I either haven’t done before… or I want to see what others have done for a good start is to go on youtube, here, or just do an image search.

If it were me, my fireball head would look something like this:

Now this is obviously from a fluid sim, but it has structure… an inside, and outside… dark, light.

My main head would probably be a sphere with a material. The sphere shouldn’t be “perfect” so give it some deformation, but that would be my head.

From that head (sphere) I would emit my trails.

I would use that as a basis for my trail.

That will give you some movement with a flipbook texture that you currently don’t have. It would also eliminate the “sharp” edges that are occurring right now.

I would do the same with the smoke… have a fluid sim flip book of smoke and run that as your smoke.

Your trail also looks a little thin behind the head. Basically your head and your trail look a little separate.

But using a sphere might help that gap. The sphere can also be elongated to help the gap… just have to play around with it.

Also… have WAY more embers. This thing is firey and should be dangerous. Look up a video with just a simple camp fire and you’ll see more embers than you have here.

My philosophy on FX is go friggin crazy on your first attempt. You can always scale back… but if you start smaller it’s harder to get that initial image out of your head.

Also add a light to your fireball… and if you’re going to have it hit the sphere you’re going to need a nice firey explosion to go along with it… with hot debris… black debris… part of the sphere could break and fall to the ground. etc.

Oh also… might play with the thickness of the smoke. One of the cool things about fireballs is there’s no “right” way to do it. So you can have a heavy black smoke trail that might be a nice contrast to the fire… and also have the trail maybe start earlier so you have fire and smoke mingled together… just play with it.

Jamie, your advice was a great way for me to start thinking a little bit more about the simulation in general. Already signed up for a course on Houdini

Will use your advice to enhance the fireball even more. Will send the result soon enough. Have a great day!

Since this is for your demo reel, I would personally go expensive on the particles.

If it were an in-game effect and you had a particular budget then I think this would probably be ok.

Sure, but… well… that could go either way, really. Yeah, you could get away with putting something impractical on your reel; but what happens when someone asks you about it?

And ultimately, you should be able to make an effect work regardless of the constraints. That’s the whole point.

In my career, I’ve generally been interviewed by folks who were pretty sharp. (or conversely, if they’re not sharp enough to understand what’s on my reel, they’re not people I want as co-workers)

Dunno… suppose there are many career strategies.

Jamie, your advice was a great way for me to start thinking a little bit more about the simulation in general. Already signed up for a course on Houdini

Will use your advice to enhance the fireball even more. Will send the result soon enough. Have a great day!

Yup, rendering a sim into a flipbook is a great technique. I use that for lots of stuff.

Yeah, Houdini is great for things like this. Be forewarned, though, it has a very steep learning curve. Gotta keep with it and learn a little bit at a time.

I don’t really want to derail this thread since the OP was looking for artistic feedback.

But, as far as being “impractical” the really depends on the system the effect is designed for (PC, Xbox, PS5, mobile etc.)

So the “constraints” are more to due with platform, what’s in the current level… how many enemies are being spawned… how much AI is being run… what the current frame rate MIGHT be depending on all of those factors and I could go on and on.

Because this is a demo reel (as he stated) he isn’t under such constraints. So he can literally do whatever he wants.

Looking at this effect I’m going to assume he isn’t applying for a senior VFX role. That’s not meant to be a criticism, it’s just my impression.

So if he’s a junior artist (which is what I assume) then I would be far more concerned with artistic eye and whether or not the person knows what a good effect looks like.

As far as efficiency he or she can be taught how to do an LOD or MULTIPLE LODs depending on how far you want to go with it.

I wouldn’t really care if a junior artist isn’t familiar with the concept because it’s easy to teach.

BUT what would get him / her in the door to even speak with me would be whether or not their demo actually impresses me.

I’m not looking for framerate on a demo reel.

As far as “If they’re not sharp enough to understand what’s on my reel” uhh I’d probably reserve that statement and keep it to myself. You have no idea who is interviewing you or what they’re looking for so perhaps they either

So… yeah there are many “career strategies” one of them is to never assume you know what someone is looking for or know what their background might be.

As far as “If they’re not sharp enough to understand what’s on my reel” uhh I’d probably reserve that statement and keep it to myself. You have no idea who is interviewing you or what they’re looking for so perhaps they either

I mean, either of those things would be a deal-breaker for me. The “not sharp enough…” thing isn’t a brag or comment on myself (though I can see how it could be read that way, my bad) – it’s a comment on making sure the person you’re speaking with is actually on the level. Not everyone is honest. I’ve had a few jobs were the role and/or company was seriously misrepresented. If people don’t ask intelligent, relevant questions, that’s a red flag. And working for companies like that is no fun at all. Ugh.

Same goes for your second point. If someone’s going to play some weird mind game with me… no thanks! I’ll keep looking.

But as far as the topic goes… I think it’s a balance. Yes, an artist needs a good eye; but they also need to understand optimization and constraints. Maybe that’s something you learn on the job? Dunno. But if I were hiring someone, I’d look for a balance between eye and at least the aptitude to understand the technical aspects of the job.