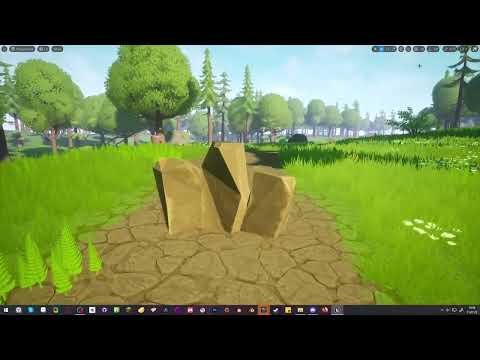 (Will probably polish this in the future, I really like the idea and want to make destruction for the end)

My effect is inspired by earth bending. Simple as that.
UE5 crashed about 3 times today. Maybe it’s the heat.

I was really unhappy with the stonewall.
So… I grabbed “a few” stones from sketchfab (70 stylized rocks - Download Free 3D model by ondrasaur [bf00515] - Sketchfab), gave them a tint to fit the ground of my environment and tried to make them work in niagara.

The heat is getting to me.
But I am happier with the result, it will be a lot more dynamic.

Good choice on switching the mesh. It looks way more appealing already.
Some nitpicks (but it is possible the gif just plays tricks): I like that each piece has a slight offset. I think this can slightly more noticeable. furthermore, the little overshoot is a bit to short for my taste. It looks like it should convey the weight of the rocks, but the momentum feels off.

Happy to see where this is going, as I like your interpretation of this months prompt

Thank you! :3
Yea, I am still struggling with my effects often being too timid and slow. I’ll keep your feedback in mind!

I’ll formulate my feedback on the motion more precise:

If you pick up a hand sized rock hand gently throw it straight up with your palm. It should look like it stays at the apex for a bit and then “speeds up” on the way down. In the current animation this step looks very immediate. I propose to increase the hang time of the rocks a bit to add to the weight of the rocks. Furthermore, (even if it does sound a bit contrary to my first point) it might be nice if all rocks come down from the apex at the same time (this part could actually be made snappy). It should add a satisfying end to the animation and better convey the sense of stability, as the loose rocks settle as one.
To get a bit ahead of the effect: when adding secondary/tertiary elements, you can have a first wave (when the rocks pop out of the ground) and a second wave (when the rocks forcefully settle). Even better if you manage to let the second wave interact with the first. (example: first wave creates dust that lingers in the air, second wave pushes the dust away from the rocks, creating an emphasize on the force/weight of the wall and help to clean up the effect.) BUT this should not be to extreme, as it may imply that the build up is also an attack, unless that is part of it of course.

Hope this paints a clearer picture of my feedback.

Keep in mind, Feedback is subjective. Especially in this format. Use it as inspiration or to help you outline what you want the effect to be.

Inspired by the feedback <3 I tried to convey some more heavyness and improve the overall timing, also added some debris.
I wanted to add some dust but the heat is frying my brain. Maybe in the next few days.

Sadly couldn’t find any time to work on this earlier.
I experimented with different styles of smoke but settled for a slightly cartoonish version since it seemed the most fitting. Gonna tweak color and timing tomorrow

Adjusted dust color and timing. I also increased the bounce of the rocks as I felt it was too weak.

This will probably end up as my final version since time is running out. Would have been cool to add destruction to the rocks at the end of their life time but my plans for getting into houdini didn’t work out.
Well, there’s still time in the future!