Hey fellow VFX artists,
I’m trying to improve some particle effects/VFX in my game, right now working on the explosion, here’s a video of it

In general, I would recommend finding a real explosion video on YouTube or something and downloading it. Then, I would go through it frame by frame (Use VLC, pause the video, then press ‘e’.) and take notes of the timings (taking into account framerate) for each of the main elements you see. Some elements I commonly use are: a flash, a shockwave, embers (some with smoke trail), debris (some with trail, again), fireball, lingering smoke, and when it seems like the object disappears visually. Pay attention to the speeds of things, too, e.g. Does the shockwave go faster than the smoke and the debris, or is it one expanding wave? Is it a singular explosion, or does it seem like there are multiple stages? How much of the screen is taken up by each element, and how does that scale to my game?

For yours specifically, here are some easy targets in my opinion. I’d make the flash much brighter and visually mostly cover the vehicle. Make the shockwave expand much more during the same duration. The smoke shouldn’t outpace the shockwave. I’d switch to your destroyed mesh right when the flash is the brightest, not right away.

I’d make the smoke last much longer, at minimum like 5 seconds, but much higher if this isn’t a mobile game. (Where fillrate can quickly get to be an issue.)

The sparks look like a circular particle that is stretched, because that’s probably what it is. (Default Unity particle?) Make a spark texture that is already stretched and then add a shaped glow around it. Then you can squish it back down into being a square texture. Now the glow looks more uniform when it’s stretched out.

You seem to be afraid of particle count. Don’t be, even if this is on mobile. You will usually be fillrate limited before particle count limited.

A small screen shake could help too, bonus points if the shake is delayed with distance that feels like the speed of the shockwave. Adding a bloom postprocessing effect generally is an easy visual improvement. As a cheap hack you can have a short script spike the strength of the bloom when there’s an explosion. If you can afford a point light, add a bright point light that fades out with the flash.

Hopefully this is helpful.

Thanks a bunch! I appreciate it. I changed it a bit according to some things you said

It’s kind of a “style” thing I guess. Are you going for a “realistic” explosion, or a “stylized” explosion?

In either case, the first thing I usually start with is the fireball. All explosions start this way. Even concussion explosions like flash bangs etc.

You need some type of “center” which is your fuel or exploding thing. Right now you have three hot spots that sort of glide upward.

Go with a single fireball in the middle with no gliding upward, and have that fireball turn black over time or vanish depending.

The sparks are a little “floaty” as well. Give them more gravity, or lower the lifetime to give it more punch.

I think this feels nice so far. The main points I’d try to hit are

If you want some inspiration, the explosions in the Just Cause series have an excellent sense of motion to them. 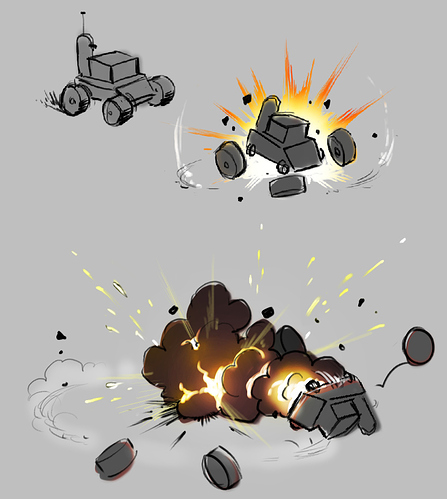 And @ryangatts that image looks awesome!! Thank you so much

I made some changes based off what was said

Much better man… make the flash go away faster though… hangs out too long.