I`m working on some moba-like effects, and my plan is to create a complete set of elemental effects, adn then post my progress on this thread.

I would really like feedbacks regarding the timing, color and feel of those effects.

First I did a lightning spell. it still need a connection between the sphere and the capsule, to specify where the spell is coming from.

Then there is an Energy Concentration effect:

So, any critique os very welcome!

By the way, those dirt wind effects were inspired by this @NateLane 's breakdown:

But I created the texture shape using a noise texture and UV gradients with smoothsped. The shader is the same for the Fire Trails on the second gif.

I`m working on the lightning now. Trying to replace that boring static texture with some animated flipbooks. Here is the main lightning animation I did:

I`ll still create other lightning flipbooks for the smaller particles.

looking good - i’d maybe suggest trying to have things fade out a little less uniformly - currently the whole beam fades out at the same time which looks a little static and fake - having a frame or two right at the end with only a few very small pieces would be cool - depends if you can afford the frames in the flipbook though.

there’s quite a big jump from the initial flash to the one that fades too - maybe keep a little bit more of the main body or add another frame during the jumping before it start to fade, if that makes sense. be great to see a frame by frame flipbook as well as the gif when you’re asking for feedback.

looking back at the first two effects - id say the lightning flashes on the first effect are a little too uniform in timing - they seem to spawn in a few waves of bursts - lightning should be as random as possible so maybe break that up a little if you can. i really like the swirl that happens with the lightning bolt, that looks great.

the energy concentration effect is also pretty nice - maybe have a bit more concentration and less burst but it’s sort of in that anime style so i can see where you’re going with it - obviously gameplay would be more of a driving force for this sort of thing. i would say that the initial ring that draws in cuts through the ground and maybe looks a little flat because of that - either back it up with a z-aligned sprite or use a mesh sphere instead? a few more little dots during the charge could be cool too.

i love the motion you have on the little dots in the burst - they work really nicely.

Hey, thanks for the feedback!

I’ll look into the other effects later. For now, I did some adjustments on the lightning effect. By the way, the idea is to replace the lightning on the thunder spell, but I don’t have the project where I am right now, so I`m working on a separated project.

Anyway, here is the new version: 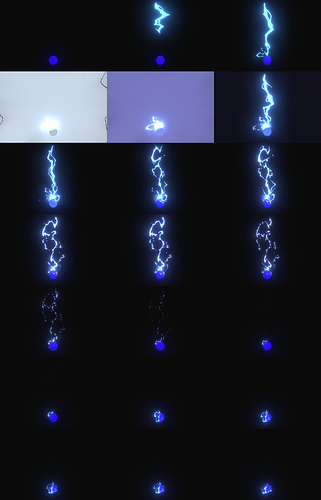 love the secondary fx around the sphere! The value flickering on the final piece is maybe a little strong but the motion is great.

Frame 8-14 is what i was talking about - the whole thing fades out quite uniformly - i’d expect the little bits to fade off first and the main bolt to last a few frames more.

I did an animated sprite for a fire effect. Still don’t know exactly what I`m gonna do with it.

For the lightning, I still need to ajust the timing of the erosion on the animation, as suggested by @tharlevfx

For now, Im following some tutorials I found on Alex Redfishs deviantart about those animations, and at some point I`ll return to the spells with a set of, hopefully, awesome particles.

Very good effect!
I think starting line of lightning should be straight and bottom line is more distotion.

Love the style of these, how did you go about making the textures? I really want to brush up on my texture making skills so any tips on how you achieved these would be great

Here is a bunch of tutorials (just look at the descriptions of each post), which I used to enlight an approach to start making the textures: Lightning Strike Making Process by AlexRedfish on DeviantArt

In my case, I used photoshop, creating a timeline and drawing each frame in a direct sequence. Then I organized them in an atlas to use in Unity.

I love the Effects, great job on the fire. I like how smooth it’s.

I’m curious how the lightning looks when you remove some frames inbetween to create some flickers, maybe replace the frames with some strong shaped contrast frames?