Hi, this will be my first Sketch. I’m a bit late to the party, hope I will still be able to make something cool!

I was thinking of some kind of stylized interdimensional themed teleport. Maybe using Thor’s Bifrost as a reference or something darker like Void Spirit from DotA2.

Was thinking about how I want to get rid of my object. Tried some vertex collapse shader:

First attempts at making some rainbow beam from the sky that initiates the teleport:

Playing around with it for a bit got me this: 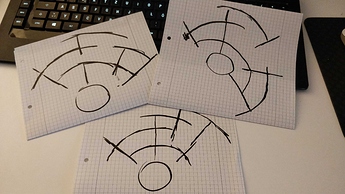 Thanks! It’s using a technique I learned here:
https://www.magesbox.com/article/detail/id/580.html

Nothing complex actually. The idea of doing it like this through UVs is super quick and easy.

Thx for the resource this is awesome!

Worked a bit on the ground effect and portal under the sphere. I think I will animate it in at the same time as the “upper one”, creating a tunnel? Will probably pick up the runes around next.

Creating the mesh-based runes now. This is my workflow: 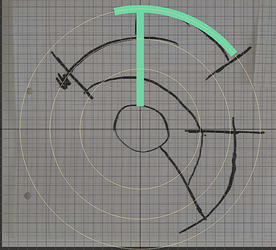 I sketched them out on paper, took a photo, put it into the backgroud (frozen plane with material on it from left view) and now I’m tracing it with splines and planes. Because I’m using planes I’ll be able to offset UVs in a way that will give me a “UV progression” from the center towards the edges. I will do this with all the 3 different ones and spawn them around the center with random rotation, giving me enough variation to not make repetition obvious.

Decided to do another hour before I go to bed, finished all rune meshes and UVs for one of the runes, other ones should be quick aswell. Will merge them into a single mesh and separate them in-engine via vertex colors I assume.

Some stuff that I dislike about this current one. Not sure about the brighter center and change of panning direction. Just trying different approaches. I added the runes and a Paragon character that has some cool animations I can use.

This is amazing! I love the subtle colors and the runes! Also the hard black/white contrast in the center is great, it really draws the attention. For some reason, I liked the other direction more, even though this direction makes a bit more sense. Nonetheless it looks absolutely stunning.

I made a little background element, to add on top of the skybox during the animation:

Love the colors! Did you use a node to displace the different color channels or is this part of your texture?

I’m sampling the texture 3 times with a flat UV offset on 2 of them (to displace the color channels). It’s not part of the texture. There’s a link to the technique on Magesbox somewhere above.

Although it might be possible to make it part of the texture by applying the same technique in Photoshop, but it would be less flexible. Worth a try, though.

Thanks for the link, I missed that while reading the first time!

This is the current progress of my shot:

I took out the runes for now, I felt like the effect worked better without them. I will try to bring them back in a revamped form.

New iteration time! I changed the background to be darker, as I wanted to incorporate two themes for teleporting out and teleporting in. Just to give some idea of a story.

I also used Niagara for some mesh sampling particles, using different Sampling Regions to match the colors of the particles to the character model. The particles are used to make it look like the character is being sort-of ripped apart. Finally, I added some smoke done with the NinjaFluid plugin, that was pretty quick and painless. Very useful plugin!

As a last step there are some minor timing issues I’d like to work out and I have some ideas for how the “save the runes” that I was working with. I generally felt like they were too erratic and noisy, but I might be able to fix that by simplifying them a bit, maybe making them a bit slower (might impact the overall feel too much though).

Special thanks to the Paragon team for providing the ground textures, the characters and the animations for free on the marketplace. It’s awesome to always have these at hand!

Amazing! This really came together.

Love the chromatic elements and the way the characters dissolve and reassemble from the sky! Definitely evokes that Thor/Bifrost feel!

So I saw you were using Phase a week or two ago and got really excited but wasn’t going to mention it… but seeing the Paragon minions and even the ground texture in there as well I just had to say something. Seeing Phase is somehow strangely like seeing an old friend, because I got to do her FX! Man I miss Paragon and it makes me ridiculously happy to see her and the other project assets being used so frequently.

Hah, what a coincidence! I was going through the marketplace, looking for a character that has fitting animations for what I had in mind, so I found Phase. When I added the files to the project I realized that she has this ‘chroma’ theme in her FX as well. I already thought that was a pretty funny coincidence, but I had no idea that you made those! They look great, I especially love her primaries!

This is the final update I’m making to this effect. Not much changed, slightly shifted some timings around and most importanly I added the runes back in. I simplified the mesh and changed the way I animate them (scrolling a texture through them instead of doing it procedurally). Also touched on some weird things happening in the beam shader (the cylinder one).

It’s been a lot of fun, throwing together techniques I’ve wanted to try out or explore further. I put in quite a bit of time, but I’m happy with the outcome!