I thought I’d give the Latest Sketch a try! It’s a neat theme and it reminded me of this “original”

League idea I had for a character named “Damien”. Damien’s a child like Annie and is the nephew of Darius. Damien’s supposed to be a servant/conduit of Death (reaper) and his abilities reflect it’s aspects (as well as subtle references to Darius). His Hair looks kinda like that characters from Don’t Starve haha.

For this ability, I imagined it being the [W] called “Deaths Grasp”. It scatters champions then reels them back in with a “soul thread”. The thread is a theme I’ve seen associated with death/fate. The red ring is supposed to warn you after the hands charges, otherwise it telegraphs too early and is easy to avoid.

[DEATH’S GRASP - W]
Death’s hand is summoned. After a short delay Death’s hand strikes the ground, scattering nearby targets, applying a tether and knocking the central target(s) airborne. After 1 second, tethered targets are pulled back in and slowed by 35% for 1.5 seconds. Applies Death’s Mark.

Deaths Mark - Applies a mark that deals 3 true damage per second for 6 seconds. Damien Heals for 1.5% of his maximum health when consumed.

I’m working out the value since it looks like a-lots going on (wind/hand/debris). I tried using Purple, but it didn’t feel as powerful. I decided to go with Yorick’s palette for the spectral theme.

Here’s another update. I decided “soul shackles” made more sense instead of a thread (plus its more oppressive haha). It’s pretty neat how you can fake a ribbon trail using a spline and a panning mask

I feel like I’ve covered most of what I wanted for the idea. It’ll probably get too noisy if I add more to the AoE (area of effect). I’m gonna start refining/simplifying some more, especially in the chain region.

What say you fine folks? 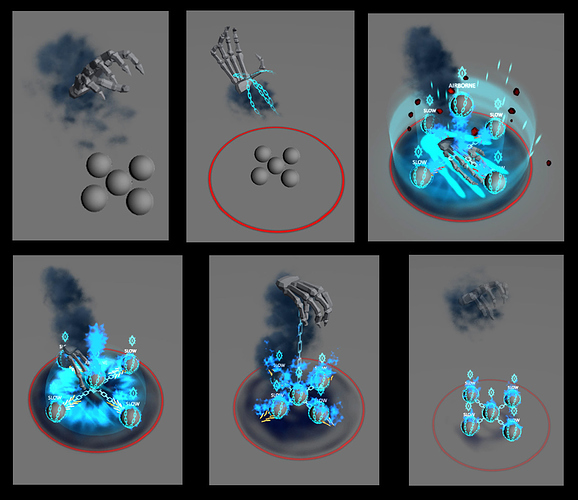 I’d say theres a bit too much color its all kinda clustered up together.
The big culprit however might be the red. Try using a cyan, bleuish color for the outline.
If that doesn’t work for you, you can also try a variation of orange, but i think the outline is to persistant and obvious to use a complimentary color on.

I like the hand impacting, maybe you could do something more with that. Leave a black outline of the hand on the ground and fade it out really slowly. Maybe some cracks aswell?

The animation and the impact feel good. Nothing I can say except, perhaps, to give the hand a bit of a shadow to make it obvious where it is.

Looking awesome! The big thing that sticks out is that your energy doesn’t seem to “cool off” when it falls away fro the source. Just like a gas stovetop glows different colors based on how far away from the source the flames get, your energy should have a small range of colors to indicate that intensity of energy.

@Niels Thanks! Yea your right, cyan is much better and consistent. Cracks was a great idea as well!
@NateLane Thanks as well! Your right about the energy- it was far too plain without a color shift!

Here’s the latest iteration on my sketch. I went through some crack iterations and decided to go with an actual floor texture instead of just an outline (I recall Morgana’s Tormented Soil). I also included an emissive to the crack. Is it distracting or too subtle? I’ve seen it too many times to tell

I used a cyan to purple scheme to denote an energy shift. I tried different iterations of the chain “losing power” and it looked best with a subtle color shift. Shifting to black or purple looks bad and is hard to see.

I’m thinking about the spirit fire still in terms of color and brightness. There’s a lot of stuff going on at once.

The one thing I find annoying is the rendering order in Unity. In the 4th shot, the chain is rendering under the ground texture. I had to instance the 4-way chain as a particle system (its using a stretching mask though not animation).

Is it possible to instance an animation as a particle system? Solely so I can change the render order since ShaderForge/default sorting is beneath the particle systems. I can’t seem to get the mesh/material to render on top because the max queue is 5000. However, if instanced I can use “Order in Layer” to force it to render on top.

Also, is it possible to animate the shadow casting in Unity? I want to toggle it off/fade it out once the mesh disappears. I’ve tried animating the mesh scaling down or flying upwards but it looks bad. 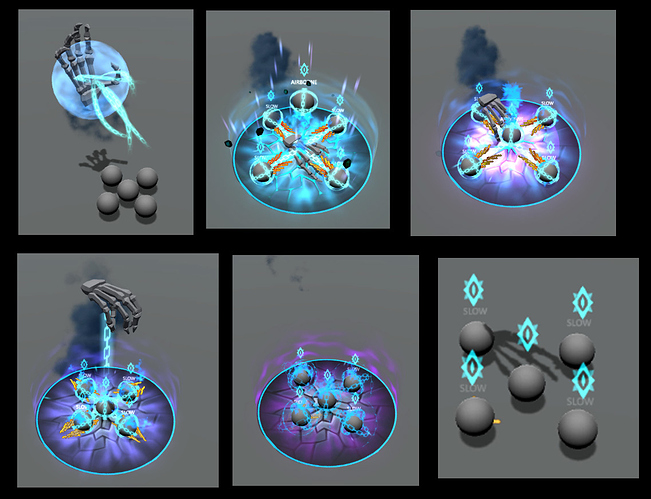 @NateLane Thanks! I haven’t had time to work on it lately

I’ll definitely keep it in my back pocket since it’s an idea I’ve had for a while. I’m thinking of making the entire spell kit eventually (once I learn some basic scripting for key-presses